Garry Curtis, chairman of Manx Butterfly Conservation, explains why our skies are aflutter with tens of thousands, and possibly hundreds of thousands, of Painted Lady butterflies.

Garry Curtis, chairman of Manx Butterfly Conservation, explains why our skies are aflutter with tens of thousands, and possibly hundreds of thousands, of Painted Lady butterflies:

During late July and early August, the Island was treated to a spectacular natural phenomenon in the form of a huge influx of Painted Lady butterflies.

The Painted Lady is a migrant butterfly. It cannot survive a British winter at any stage of its life cycle.

During winter, the butterfly exists in the Atlas Mountains of Morocco and sub-Saharan Africa. The standard life cycle is that as the year begins to warm they make their way north, colonising vegetated areas and laying eggs to produce a further generation, which, in turn, makes its way further north.

Successive generations are produced, all steadily making their way further north. In most years, they even reach as far north as the Arctic Circle.

Sometimes, however, conditions exist where warm airflows can enable it to either fly straight here from Morocco and northern Africa or to make it in just two generations. Accordingly, the earliest arrival date we have recorded is 9th February 2016.

I first became aware of a possible large influx on the morning of Monday 29th July when I saw about a hundred at the Ayres. This seemed a high amount, so I wondered where they may have come from. 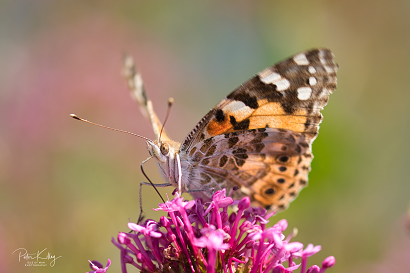 Perhaps the most surprising element of their arrival was the prevailing weather conditions. It followed two days of intense rain, so the last thing I expected was a major influx of migrant butterflies.

Generally these occur during a spell of warm, southerly winds. But it would appear that they were either following the rain or flying with it.

Over the next few days, reports flooded in from all over the Island. It seemed almost every garden with nectar-bearing plants had good numbers of Painted Ladies and reports of a hundred per garden were not uncommon.

It was a real pleasure to hear from so many people who were enjoying this spectacle.

It is impossible to place a figure on the number that arrived but it was clearly in the upper tens of thousands, possibly in the hundreds of thousands.

And a final note. While this influx was spectacular, enjoyable and noteworthy, we must not take it as a sign that all is well in our countryside.

The majority of our butterfly species have seen declines in recent times and it is the conservation of these which we must focus on once the excitement of our Painted Lady invasion has subsided.