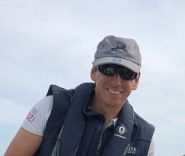 In a regular feature in Manx Life, published by Mannin Media, authors from different walks of life offer a personal perspective on #MyBiosphere. This month, Russell Collister writes:

To those who associate the Isle of Man with the noise and mayhem of the annual TT races, it may seem curious that this little nation enjoys the altogether more tranquil status of UNESCO Biosphere Reserve.

Ask any of the thousands of visitors who make the pilgrimage to the Isle of Man each year, however, and they will tell you that there is much more to this gem of an Island than supercharged bikes.

Much of the Isle of Man’s charm lies in its ruggedness and remoteness. The isolation of its geography, in the middle of the stormy Irish Sea, has helped the Isle of Man to protect its independence for many centuries. ‘Unspoilt’ is a word often used to describe the Island, implying that nature, rather than mankind, still has the upper hand in this remarkable little country.

A defining feature of any Island is its coastline and here, the Isle of Man has one of the best in the business. The ‘Way of the Gull’ coastal path meanders over almost 100 miles of mixed terrain, showcasing occasional sandy beaches, breathtakingly sheer cliffs, rocky outcrops and for the Island’s seafarers, a surfeit of nautical hazards.

Sailing in Manx coastal waters is a specialist occupation. The jagged coastline and big tidal range ensure that navigational errors rarely go unpunished. Local sailors cut their teeth in big waves, strong winds and the need for pinpoint accuracy. When competing internationally and the breeze is up, their first reaction is ‘bring it on’.

A similar toughness has ensured that the Isle of Man, obsessed as it is with sport, has punched well above its weight in producing truly world-class athletes. Away from the coast, the Island’s roads and pathways buzz with cyclists, runners and walkers. On the beach, the sea conditions inspire a growing number of paddleboarders, kitesurfers and open water swimmers (cold water wetsuits are very good these days).

This, then, is my Isle of Man: an intricate environment of near-perfect natural conditions inspiring outdoor pursuits, all supported by excellent infrastructure. Swimming pools, running tracks, horse riding centres, artificial pitches, grass pitches. Trails carved through plantations, a mountain marathon, a crazily long Parish Walk, a bulging sporting calendar. Specialists in almost whatever sport you choose, all within a ridiculously short radius.

Island life is, by definition, framed by our coastline and our beaches. Even here, away from it all, the Isle of Man is leading from the front. Beach Buddies, a charitable organisation breathtakingly simple in concept but strong in leadership, has inspired literally thousands of volunteer members to regularly clear the Island’s beaches of accumulated plastic and other flotsam and jetsam swept in by the tide. This can-do, self-sufficient attitude to life has evolved over generations. It doesn’t suit everyone, nor does it always come easily. But it suits me and my fellow Islanders just perfectly.