In our regular feature in Business 365 magazine, authors from different walks of Manx life offer a personal perspective on #MyBiosphere. This month, Andrew Scarffe writes:

In our regular feature in Business 365 magazine, authors from different walks of Manx life offer a personal perspective on #MyBiosphere. This month, Andrew Scarffe writes:

Growing up in the 1970s, the Laxey Valley was a huge adventure playground for myself and my friends. We climbed trees, regularly fell into the rivers and streams, explored the old mine buildings (despite parental warnings not to), walked to the top of the surrounding hills and clambered over the rocks on Laxey beach, dodging the waves.

Even at a young age, I appreciated the beautiful scenery of the village and its fascinating history. I considered it a privilege to have such a wonderful place literally outside our front door. Almost 50 years later, my appreciation increases with every passing day.

I don’t think that it is an exaggeration to say that I have Laxey and its history rooted deeply in my DNA. My paternal forebears were connected with the Great Laxey Mine. In the 1840s, the family of seven lived in a tiny thatched cottage in Glen Mooar. In 1854, the Laxey Wheel, Lady Isabella, was built directly opposite the cottage and Thomas Scarffe became the “Sunday watcher”, paid a shilling each Sunday to watch over the waterwheel when the attendant was not working. In those days, of course, the waterwheel turned continuously to keep the lower workings of the mine dry.

It was a poignant moment to discover a record in the Manx National Archive of Thomas removing from the mine the body of one of his workmates who had been killed in an accident. The remains of the cottage can still be seen to the rear of the present-day admission kiosk at the waterwheel.

Subsequent generations continued to live on Wheel Hill. It would seem that wanderlust was a quality unknown to my family. This presumably prompted my great interest in, or some would say obsession with, the Great Laxey Mine and led to the publication of my first book, which related the full history of the mine and which was published in 2004 as part of the 150th anniversary celebrations of the Laxey Wheel.

Although aspects of mining certainly had a detrimental effect on the village, it was an early pioneer of renewable energy, using the power of water to drive the waterwheels and machinery which enabled the mine to function on waterpower alone. Perhaps we could learn something from the early Victorian engineers?

During the late 1960s and early 1970s, my maternal grandparents ran one of the village shops in Andreas. It was a typical of village shop, selling everything from bacon to ice cream, bread to children’s toys. Each Wednesday we would travel by electric tram to Ramsey where we would be met by grandfather in the shop van. Thus began another obsession, the Manx Electric Railway. Today, I am immensely privileged to work for the Manx Electric Railway and drive the electric trams to Ramsey. 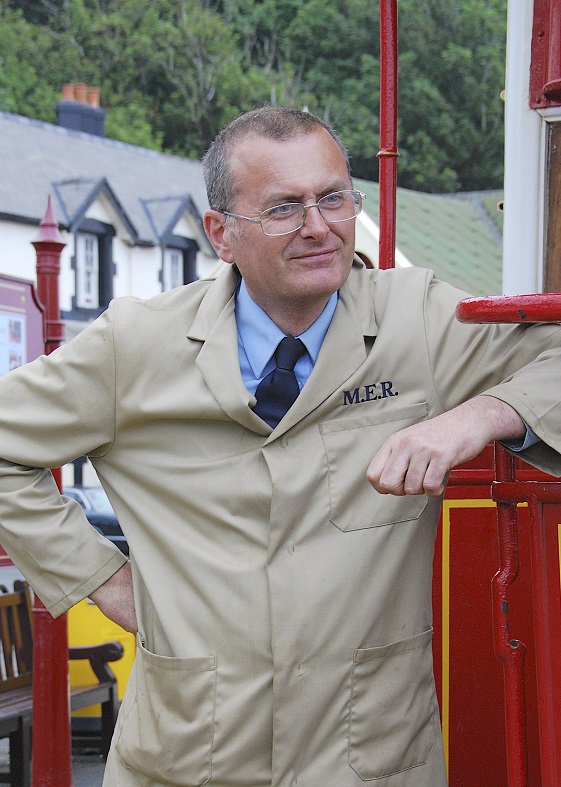 I would urge everyone to travel on this pioneering and unique Victorian electric tramway. The journey to Ramsey is quite simply superb, as the tram runs along cliff tops and through glens, around impossibly sharp curves and up and down the steep gradients through magnificent scenery. As a true Laxey man, it pains me to have to say that the Maughold is probably the most scenic parish on the Island. Its scenery is unrivalled; the sheer cliffs dropping towards the sea at Dhoon Glen, the peak of North Barrule rising steeply from the lush farm land, the lighthouse standing guard over the sea and the small hamlet of Maughold.

It is fascinating to watch from the tram as the countryside changes throughout the seasons; indeed, journeys along the line can differ in a single day. In springtime, the daffodils and bluebells are in full bloom. Ballaglass Glen is transformed into a vibrant green as the new leaves burst open on the beech trees.  New born lambs run to their mothers as the tram rattles past their fields. In summer, the greens of the countryside begin to darken. Young swallows chase the insects disturbed by the tram. Buzzards fly from the treetops at Cornaa; choughs from the cliff tops at Bulgham; sparrowhawks dart in and out of the hedgerows. Then, in autumn, the leaves change colour and fall as another winter beckons.

In 2016, the Isle of Man was awarded Biosphere status, recognising the truly special place in which we live, our culture and our history. We must all celebrate this achievement and play a part, no matter how small, in cherishing and preserving our beautiful Island for the future generations of Manx people.

Andrew Scarffe is Chair of the Laxey and Lonan Heritage Trust and a volunteer on the Great Laxey Mine Railway. He has had a lifelong interest in the history of Laxey and Lonan, particularly relating to the mining industry and the electric tramways.  Andrew has written a number of local history books including the definitive history of the Great Laxey Mine. His latest book recalling the history of the Snaefell Mine was published to commemorate the 125th anniversary of the Snaefell Mine Disaster. Andrew works for Isle of Man Railways and is a motorman on the Manx Electric Railway. He leads volunteers who have restored historic rolling stock on the MER over the last few years.