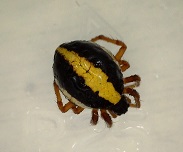 Philippa Tomlinson, of the Manx Biological Recording Partnership, writes about the work of the Island's dedicated species-spotters and a boost received from the Manx Lottery Trust:

The Partnership recently received a grant of nearly £2,500 from the Manx Lottery Trust for the purchase of six microscopes to use for teaching and research.

A microscope is often required for the identification of many wildlife groups especially the smaller insects and lower plants such as mosses and fungi.

These microscopes will be useful for training courses, such as the recent spiders workshops run this year. Not only are they are great for enthusing people to work on the accurate identification of species, but they are also invaluable in getting children excited about the wildlife around them, as the Manx Wildlife Trust does so well.

The microscopes will be housed at the iMuseum and managed by Laura McCoy, Curator of Natural History at the Manx Museum. They will be available for loan to members of the partnership or individuals or can be used in the iMuseum by appointment with Laura.

Two notable specialists who are devoting time to recording invertebrates are Kate Hawkins and Steve Crellin.

Their dedication produces new species for the Island, not formerly recorded. Kate recently found a new species of Orb Weaver spider at Dalby Mountain Manx Wildlife Trust reserve, which has been confirmed as Hypsosinga pygmaea (main picture). Steve has sent this splendid photo of a Scabious Sawfly (Abia sericea) which he has only recorded once before (picture below).

This fly’s food plant on the Island is Devil's-bit Scabious (Succisa pratensis), which grows in damp acid grassland. It is therefore a useful indicator of this habitat.

Steve said: 'The photo was taken of a specimen found at Dalby Mountain Reserve at the interface with the plantation. I’d seen it previously in the Curragh, to the north of the Wildlife Park, in the good old days when there were lots of wildflowers along the track.'

If you have a good photo of something you have spotted recently, iSpot is a really useful way of getting identifications verified. Just send in the details and a photograph to the website.

Manx Wildlife Trust’s Ballachurry Wetlands Reserve recently had an open day. Sheila Norris, who looks after the reserve, has collated all the species that she and others have identified on the reserve since 2010.

She has amassed an impressive list of more than 500 species. This is with the help of several local specialists from the groups such as the Manx Ornithological Society, Manx Bat Group, Fungus Group as well as individuals.

We are so lucky to have these many enthusiasts and experts on the Island, without whom our knowledge of the flora and fauna would be very limited.