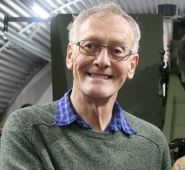 #My Biosphere by Ivor Ramsden MBE

Ivor Ramsden MBE, Director of the Manx Aviation and Military Museum, is February's guest author in the #MyBiosphere series of articles in Business 365, published by Mannin Media:

Although not a Manxman, my family’s links with the Island go back over 100 years.

One of my treasured possessions is a sepia photograph of the band of the Duke of Wellington’s Regiment which was taken at its summer camp at Knockaloe in 1910 and in which my grandfather, Sergeant Harry Ramsden, appears.

I have happy memories of holidays here with my parents during the 1960s and I think it was at that time that the Island took hold of me. The sun seemed to shine every day and I can still picture the lizards scattering out of our way on the footpath to the Chasms.

My strongest memory of those holidays is confirmed by a photograph taken of me at the top of Laxey Wheel. My fixed grin hides the fact that I was absolutely terrified of the height and what doesn’t show is the white knuckles of my pudgy hand, which was gripping on to the rail for dear life.

In July 1991, I moved here. On the very first day, I walked from Castletown to Balladoole. It was a gloriously warm summer evening; a light breeze rustled the grass and the only other sound was that of the birds and sheep.

In that tiny patch of land I was surrounded by the remains of man-made structures dating back into prehistory and, within minutes, I was completely at peace with the world. I knew that the move was the best thing I could have done and that this Island truly was the place that I would spend my life.

In recent years, having become involved with the Manx Aviation and Military Museum, I have had the pleasure of guiding visitors to our Island to some of its remotest spots – places where members of their families died in aircraft crashes in the Second World War.

The passage of the years has erased most of the sad evidence of tragedy on the hills and every one of those visitors has remarked on the Island’s wild beauty.

One particular comment I shall remember for ever. It was made on 4th July 2011 when the crew of the Space Shuttle Discovery were visiting the Island for Tynwald Day. They had asked to visit the site of the Island’s worst ever air crash, which happened in 1945 when an aircraft flew into North Barrule, killing 31 American servicemen.

Manannan was kind to us that day and the sun shone on the rocky slopes where all those lives had been lost in an instant.

The Island was looking at its best and one of the crew remarked: ‘It really is a magical place. This is the most memorable Independence Day I’ve ever had.’

Spoken by a man who has looked down on our fragile planet while walking in space, those words raised goosebumps on my arms. Writing about it now, they still do.

Let us do all we can to cherish this magical place. Our Island deserves our love. Tread softly on the hills and in the valleys, leave nothing behind but your fading footprints and take away nothing but memories.