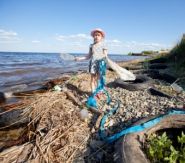 UNESCO Biosphere Isle of Man will join Beach Buddies on 19th October at an event to mark a major milestone in the charity's growth.

It also celebrates generous donation by the SkyWind Group of £10,000 which will establish a long-term relationship with Beach Buddies, and the official "adoption" of a long stretch of western beaches to protect seabirds.

The event, for up to 200 schoolchildren and for a handful of environment groups, isn't open to all. However, details of a major new annual public event will be unveiled at it.

Manx Radio DreamCatcher Appeal is a major part of the day and Manx Radio will broadcast live from the event.

'This is a major moment in the brief history of Beach Buddies. When we started I thought it would be a wonderful achievement to eventually have 500 volunteers. To be honest, I thought 500 was too big a target. To have reached 10,000 different volunteers within the last five years is beyond our wildest expectations.

'And the figure continues to grow. Every week we see new volunteers and we are already well on the way to 11,000. This year has broken all records and the future looks very positive. The people of the Isle of Man are special and it's a genuine privilege to be part of this very special Island.'