A Junior Achievement Isle of Man team with sustainability at its heart has won three prizes at a prestigious European final. Nikole Cervantes of the charity tells us more.

A Junior Achievement Isle of Man (JA Isle of Man) team with sustainability at its heart has won three prizes at a prestigious European final. Nikole Cervantes of the charity tells us more.

In March this year, a team of six students from Ballakermeen High School won the JA Isle of Man Company Programme final, supported by HSBC Bank.

Atlas had one mission in mind when it created H2sOap: to reduce the pollution caused by single-use plastic.

Every year, over a billion single-use plastic soap bottles are thrown away. To reduce this number, Atlas has manufactured and developed the H2sOap, an effervescent soap tablet that creates foaming hand soap when added to water. 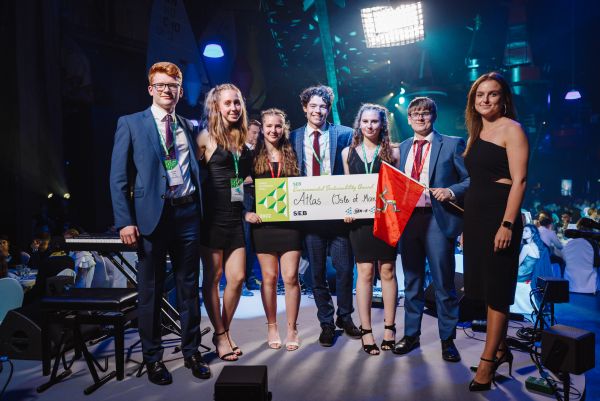 The tablets, combined with a reusable dispenser, are used to refill the bottle repeatedly. This reduces plastic waste by revolutionising the way people wash their hands.

Details of the product can be found here.

This month, Atlas travelled to Estonia to represent the Isle of Man in the European finals of the Company Programme. They competed against the top student companies from 40 other European countries.

Atlas flew the Manx flag high and won not one, not two, but three European awards: the BATA Group Award, which recognises a student company whose business idea aligns with the UN Sustainable Development Goal 8 for decent work and economic growth; the SEB Environmental Sustainability Award and the City of Tallinn Excellence in Sales Award.

Atlas was the only team to win three awards in the competition this year, a fantastic achievement for a team from such a small Island.

To learn more about the work of JA Isle of Man, visit www.jaiom.im