Explore the Isle of Man Biosphere's 10 Marine Nature Reserves on #MarineMondays. This week, Dr Peter Duncan, Senior Marine Environment Officer for the Isle of Man Government, takes us to an area with plentiful sea and bird life, four lighthouses - and even a dragon.

Explore the Isle of Man Biosphere's 10 Marine Nature Reserves on #MarineMondays. This week, Dr Peter Duncan, Senior Marine Environment Officer for the Isle of Man Government, takes us to an area with plentiful sea and bird life, four lighthouses - and even a dragon:

The Chicken Rock light and Calf of Man

If islands are ecologically special, then perhaps an island ‘within’ an island is extra special?

The word 'calf' comes from the old Norse word kalfr, which means a small island lying near a large one, and seems aptly named from both this literal translation and its parent:juvenile connotation.

The Calf of Man is considered by many to be the Jewel in the Crown of the Manx marine biosphere and the island is owned by Manx National Heritage (MNH), having been bought by F.J. Dickens and donated to the UK National Trust in 1937*.

Subsequently, in 1951, when the Manx Museum and National Trust (now MNH) was established, it rented the island before taking on full ownership in 1986.

The Calf’s importance as a bird sanctuary and migration site was recognised early on, with 30 breeding species noted in 1937 and 48 species recorded at the nearby Chicken Rock*. 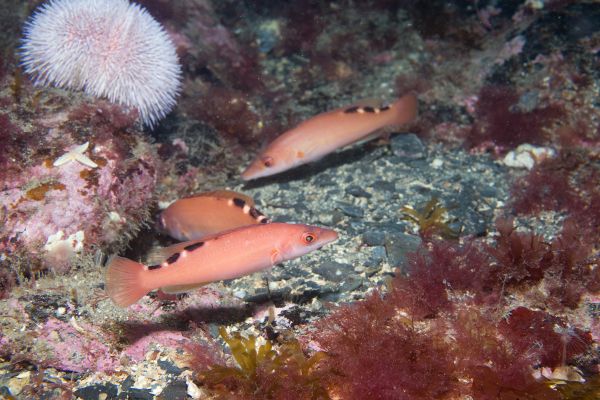 Chicken Rock itself is named after the colloquial name for the European Storm Petrel – Mother Carey’s chicken.

Today, the Calf is perhaps more famous for its breeding population of Manx shearwaters and its reproductively-fussy puffins but, in general, it makes for a great bird-watching trip with peregrine falcon, hen harriers, choughs, ravens, shags, guillemots, razorbills all fairly common around the coast.

With its terrestrial conservation importance well recognised, it seemed appropriate that the surrounding sea became a Marine Nature Reserve in 2018 – truly a biosphere within a biosphere.

The waters around the Calf are well known for swirling currents and strong tides, up to 6 knots during springs, and this helps deliver micro and macro nutrients to a host of animals and algae surrounding the island. It’s especially well known for its large, colourful colonies of plumose anemones and soft corals, or dead man’s fingers, which make a fabulous backdrop for drift diving. 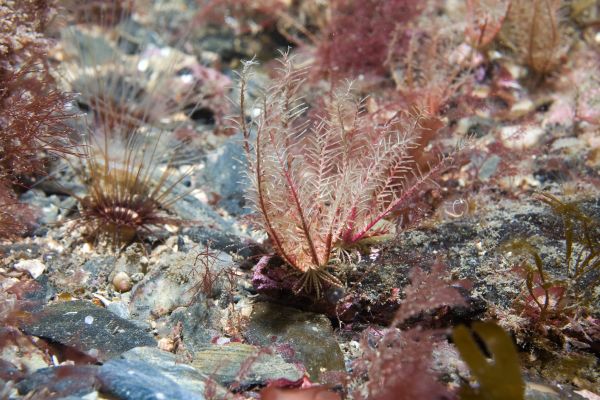 For this reason, diving around the Calf is considered one of the main Manx tourism attractions – regularly appearing on lists of the best European dive sites - and the Burroo, or Drinking Dragon, even features on some world’s best dive sites. 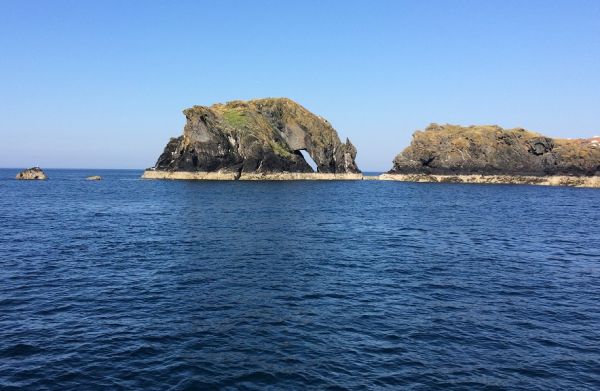 The Burroo, or Drinking Dragon

Tony Glen, local coordinator of Seasearch (a group that carries out underwater habitat and species mapping) has taken a wonderful series of images from Kione ny Halby on the Calf’s east coast.

Of special attention are the female cuckoo wrasse, feather stars, lightbulb seasquirts and the elusive ling, a close relative of the cod. (Q: what do you call a baby ling? A: a lingling!) 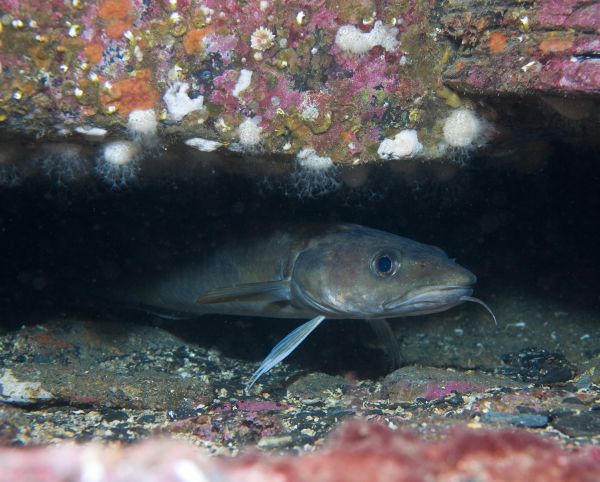 While ordinary dives are exciting enough here, if you’re especially lucky you might combine seals with your dive, as one lucky Manxman experienced recently.

Have a look at Colin Peters’ adventure here - but please remember that it’s the seals that choose to play with you, not the other way round. 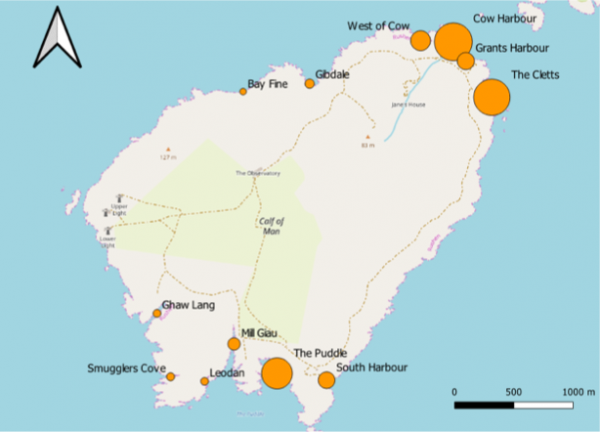 The Calf has the highest concentration of grey seals around the Isle of Man and is the most important pupping area for this species.

Manx Wildlife Trust has undertaken seal surveys for almost 10 years and, in 2019, a total of 69 seal pups were born on the Calf, the second highest number since 2009.

The Calf is a strange contradiction of accessibility – actually fairly difficult to get on to, but completely observable from the wonderfully-situated café, where anyone can gaze out across Kitterland Islet, Calf Sound and the Calf beyond. 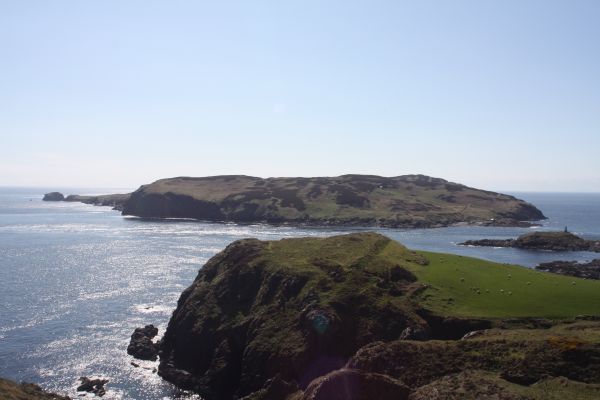 View from the Sound to the Calf of Man

If you do visit by boat, either to land, or circumnavigate, you can’t help notice the lighthouses – all four of them, and including a ‘proper’ rock lighthouse on the Chicken Rock, designed by David and Thomas Stevenson and first lit in 1875.

For me, these help give the Calf a real feeling of marine isolation and adventure, which befits its important conservation status.

Further east of the Calf is the other part of this MNR, and not even divers visit here - unless you’re a gannet or a puffin, maybe.

This submerged sand and shell bank – called the Wart Bank – is well known for its sandeels and as a nursery for juvenile fish, which therefore attracts larger predators, including adult fish, seabirds, seals, whales and dolphins and recreational fishers.

It’s a top fishing spot and its inclusion into the MNR means that there should be enough for everyone to share - man and beast.

In essence, that is what our Manx marine nature reserves are all about – protecting special sites for everyone, and everything to use and enjoy into the future. 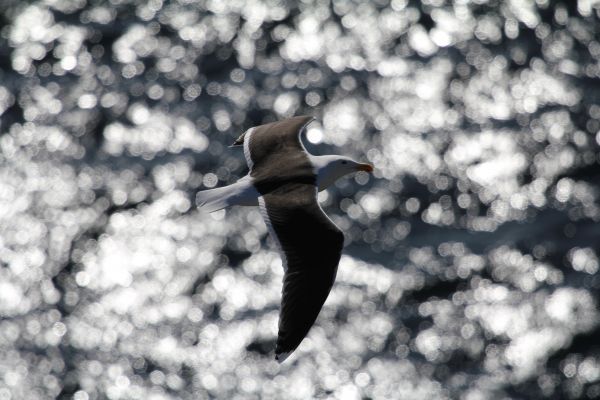