Shooting the stars in the Island's night skies

The Isle of Man has 26 Dark Sky Discovery Sites, where night skies are unspoiled by light pollution. Photographer and filmmaker Brook Wassall takes stunning images of our skies. He lets us into the his secrets for shooting the stars.

The Isle of Man has 26 Dark Sky Discovery Sites, where night skies are unspoiled by light pollution. Photographer and filmmaker Brook Wassall takes stunning images of our skies. He lets us into his secrets for shooting the stars:

What attracted you to photography and filmmaking?

Films are something I've loved since I was young. I remember watching DVDs countless times to get sucked into another world and experience something different. I got obsessed with making up stories, as any child does, but I then started to enjoy writing the ideas down as short stories or cartoons. I soon desired to have a video camera to create videos as well, but it wasn't until I was about 17 that I got obsessed with how to tell a story visually.

Photography was, then, something I wanted to avoid as I was much more attracted to moving visuals. It wasn't until I came across a timelapse video called 'The Mountain' (by TSO Photography and scored by Ludovico Einaudi), and wanted to create something similar, that I realised I needed to learn photography. Eventually, I fell in love with photography and started to pursue it just as much as film.

What is it about photographing and filming the Island’s night skies that appeals to you?

It boils down to not realising what we have and trying to cement that in as many picturesque ways as possible. When I was first experimenting with taking pictures of the night sky, I was at a friend's house in Foxdale where there's little light pollution. I placed the camera on the ground, pointing straight up at the night sky, not really knowing what I would capture. I wasn't prepared for what I was about to see. On the picture, I was surprised to see tiny dots of light of the screen, varying in colour but unmistakably stars. I took a bunch more, trying to capture different formations in the sky. It baffled me that I was able to capture the stars with the simple equipment that I had: a Canon 60D camera and a 50mm lens. It pushed me to strive further and try to capture the Milky Way.

I first captured the Milky Way in 2013 in the hills of Foxdale on a freezing cold night with strong winds. I'll never forget it because it was surreal to think that I could capture something so astounding and far away from us in space. I had always known you could faintly see the Milky Way with the naked eye on the Isle of Man but to know that it could be captured in such detail, and over time, to show its movement as our planet rotates, blew me away. I guess it was a sense of wonder and discovery that kept me taking pictures of the Milky Way. I wanted to capture it with the perfect foreground to show off its grand scale. I felt unbelievably lucky to be living in a place where I could head outside and find a spot of sky unspoiled by lights and take pictures of the stars for hours upon hours, until sunrise. Heading out to capture a timelapse of the Milky Way and watching the sky while listening to music for the two hours that the camera would be at work, became my therapy.

My favourite thing to capture is the Milky Way but my favourite place to capture it is always changing. I'm always looking for something new and different in the foreground to complement the sky. Favourites include puddles and reservoirs to reflect and enhance the power and scale of the Milky Way, and structures for the Milky Way to tower over. The place I feel best shows off the grand scale of the cosmos is the Sound. There, you can capture the Milky Way towering above the Calf of Man. If taken at the right angle and from the right position, you can picture the Calf of Man sitting on it's own in the water with nothing surrounding it but for the stars above, as if you had taken the picture far out at sea.

Another favourite of mine to capture is the Northern Lights. They rarely make an appearance this far down and are unpredictable, but, when they do show up, they can put on quite a show and leave a lasting impression on you. I first caught them back in 2014 and I found myself jumping for joy and running around the field in excitement.

To the uninitiated, astrophotography looks really hard. What skills do you need to get great shots and what advice would you give to someone venturing out for the first time?

People have the impression that astrophotography requires expensive gear and it's hard to achieve results, but it's not. My first adventures in astrophotography were with a Canon 60D camera, which is affordable these days, and even my go-to Canon 6D is six years old. It's more about knowing how to work around what you have available to you.

The basic essentials are a DSLR camera capable of taking long exposures, a wide-angle lens with a low f-stop (best to start with wide images around 15-20mm) and a sturdy tripod.

Since you're taking long exposures over the course of around 30-seconds, you'll want the tripod to keep everything in the picture sharp. Starting with a wide-angle lens is easiest as that will allow you to exposure for longer, meaning you capture more details. If you used a 50mm lens you'd only really be able to exposure your image for about 10 seconds before you would start to see the stars becoming lines in your image, due to the earth's rotation, so starting out with a 15-20mm lens means you can comfortably expose for about 25-30 seconds, giving you much more detail.

There's a handy little trick called the 500 rule which explains how long you can comfortable expose for with whichever lens you choose. There are plenty of articles online explaining it, but, basically, you divide 500 by the focal length of your lens to get the desired maximum exposure you can use.

As for which f-stop to use, just go as low as your lens will allow. Typically, I use f/2.8. And for ISO, this will take a bit of experimenting but you can usually sit at around 3200-6400 for most cameras these days without too much noise in your images. Hopefully that gives anyone new to astrophotography a better understanding of how to start taking pictures.

If you're venturing out for the first time, the best advice I could give you is to plan ahead. Figure out where you want to shoot your pictures, as you'll have to take light pollution into account with any location you settle on. Check the weather so you can prepare yourself. If it's clear, cold, night, wrap up warm as you'll be standing in one spot for a while as you take your pictures.

If the Milky Way is your target, work out which direction it'll be when you head out as to make sure it doesn't end up behind a hill. There are useful apps to help you with this. The best one I've found is PhotoPills.

How have your photos and films promoted the Isle of Man?

All my personal projects are for myself as a creative outlet and it hasn't been my intention to promote anything, but I guess, in a sense, they have. My timelapse film 'Skies of Mann' was focused on highlighting the Milky Way in the dark skies around the Island and has been used to promote visitors to the Island through websites. I do, of course, mention that any pictures or timelapses I shoot here are taken on the Isle of Man, as a way of trying to put the Island on the map as being a great place to see the stars but, other than that, they're purely an outlet for me and my focus is mostly on trying to make the night skies stand out in different ways. 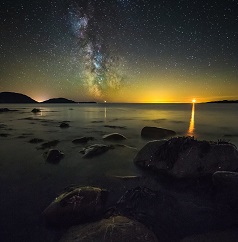 You have had international success with your photos and films. Tell us about that?

In 2015, I took a picture at Niarbyl with the moon setting on the horizon, to the right of the Milky Way. I remember rushing down to the beach as the tide crept in over the rocks and randomly putting my tripod down as far out as I could possibly go before my shoes were engulfed in sea water and before I had lost my chance of catching the moon before it fully set. I submitted the picture I took to Space.com

I noticed one day that I had a lot of traffic to my pages and was amazed to see that Space.com had made the picture their image of the day. I wouldn't really call it international success but it was amazing to see how many people enjoyed the image I'd taken just by simply making the effort to go out that night.

That same year, I decided to try my luck at a calendar competition run by the International Dark Sky Association and it chose one of my pictures for its 2016 calendar. I couldn't help but see this as a win for the Isle of Man, more than anything. At last, the Island was getting international acclaim for being a great place to witness the Milky Way and the stars. Considering our close neighbours have such big cities that power over any viewing of the night sky, it's great to know that in our little pocket of the world the Island is getting its name out there.

What is next for you?

I'm currently working towards another timelapse film with the help of the Isle of Man Arts Council to highlight everything I enjoy about the beauty of the Isle of Man: night skies as well as varied scenes in the daytime, too, although the weather hasn't always been on my side and a lot of my desired scenes haven't been captured yet. I've learnt a lot over the past few years and I'm hoping to put that to use in this film and create something really special for the Island.

I've hardly ever exhibited my pictures publicly so maybe I should change that? However, my full range of pictures is available to view online and I'm always open to requests for prints for anyone interested.

‘Terning’ 50: Manx Wildlife Trust’s half century of conservation work in the Isle of Man
Chef champions Biosphere in international competition
#MyBiosphere: Laura McCoy
Moorland Management in action
Support sought for new nature reserve that will be a haven for birdlife
Weird and wonderful fungi found at National Nature Reserve