Sarah Hickey, of Manx Wildlife Trust, is mapping carbon-capturing peatland in the Isle of Man uplands, with funding from Manx Lottery Trust, to inform restoration. She writes about the project

Sarah Hickey, of Manx Wildlife Trust, is mapping carbon-capturing peatland in the Isle of Man uplands, with funding from Manx Lottery Trust, to inform restoration. She writes about the project:

Much of our uplands are covered by a layer of peat which formed over thousands of years. It covers the land in a ‘blanket’, giving rise to the name ‘blanket bog’, which is the natural peat-forming habitat of cool, wet upland areas.

Peat forms in very wet conditions, where the high level of water inhibits the decomposition of vegetation.

In the Isle of Man, sphagnum moss species have played an important role in forming peat, as they create the wet, acidic, conditions required for its development. Sphagnum can hold up to 20 times its dry mass of water, soaking up the rainwater like a sponge. The presence of large amounts of sphagnum suggests a bog is actively growing peat.

Peat is an amazing material. Its high carbon content means that it has traditionally been cut, dried and used as fuel. This high carbon content also makes it a great store of carbon, potentially keeping it locked away for millennia. Peatlands are the largest natural terrestrial carbon store, covering only 3% of the global land surface but storing 42% of all soil carbon.

Keeping this carbon locked away is very important if we are to reduce our carbon emissions, but, unfortunately, peatlands are vulnerable. They lose carbon through erosion by water, and to the atmosphere, particularly where drainage channels have been cut into the peat or when the peat has dried out.

Historical land use practices have degraded the condition of the peat on the Island. Many of the wet areas, that provided suitable conditions for peat growth, have dried out. This is a result of drainage channels being dug into the peat and the cutting of peat for fuel, both of which lower the water table.

These practices also damaged the structure of the peat, making it susceptible to erosion.

Much of the uplands is now covered with acid grassland and dry heath, with only small pockets of blanket bog remaining.

Manx Wildlife Trust have set up the Manx Mires Partnership with the aim of restoring the peatlands to a condition where they can provide many valuable services, both locally and globally.

A survey is currently being undertaken, funded by Manx Lottery Trust, to find out how much peat we have on the uplands and where the deep peat is located. We then hope to secure funding to map the condition of the peat and produce a restoration plan for suitable areas. 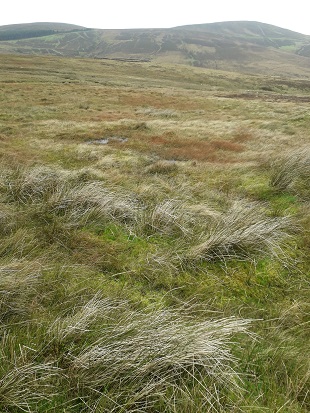 Restoration may include blocking drainage channels to raise the water-table and re-wet the peat, reprofiling peat hags so they are less vulnerable to erosion and reducing grazing intensity in sensitive areas.

There are many benefits to peatland restoration. It should protect the blanket bog habitat we already have in the uplands and allow it to increase. In good condition, blanket bog habitat can sequester more carbon from the atmosphere than forests, laying it down in long-term storage as peat.

Blocking drainage channels and repairing hags can also reduce the amount of carbon released from the peat. This could help reduce the Islands net carbon emissions, thereby having a global impact.

On a more local level, an increase in blanket bog and the blocking of drainage channels can reduce the risk of flooding as water flows more slowly through this habitat and is not channelled so quickly off the hills.

The sphagnum mosses also act as a filter for the water flowing into the reservoirs, reducing the amount of treatment required.

A wider variety of upland habitats can also support greater biodiversity of flora and fauna. Peatlands are home to a range of wildlife, including birds such as curlew and hen harrier, lizards, the carnivorous sundew and cotton grass.

Blanket bog has been recognised as an internationally important habitat so we should be doing all we can to protect what we have on the Island.

Listen to my Manx Radio podcast about peat, ‘The Cut of the Turf’, here.