Naturalist Kate Hawkins writes about the surprise discovery of a rare and protected insect in a new location in the Isle of Man.

Naturalist Kate Hawkins writes about the surprise discovery of a rare and protected insect in a new location in the Isle of Man:

As we are becoming more aware of the disturbing fall in the abundance of insects worldwide, it is heartening to have some positive news about at least one species regarded as rare in the Isle of Man.

While searching for spiders at one of Manx Wildlife Trust’s reserves in the north of the Island one sunny September afternoon, I accidentally dislodged a male Speckled Bush Cricket from a bramble bush.

It was probably as surprised as I was, but it stayed still long enough for me to take a couple of hasty photographs before I carefully put it back and texted the news to the MWT Reserves Officer. 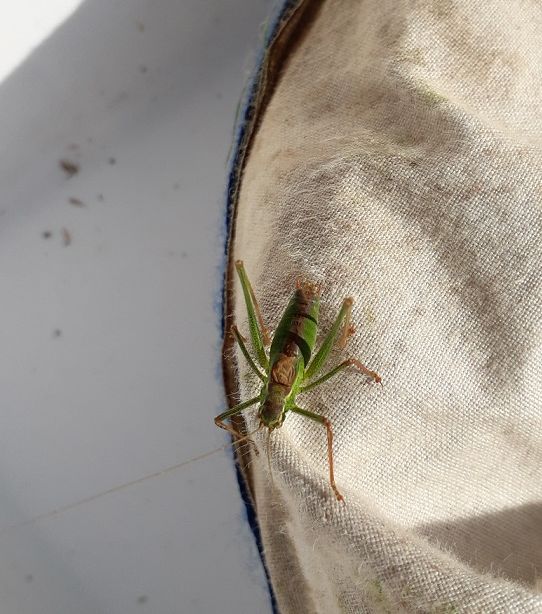 Speckled Bush Crickets are common in southern and central England but are more uncommon in the colder and wetter conditions of the north and west.

In the Isle of Man, Speckled Bush Crickets are recorded from few sites and, as a consequence, are protected by the Wildlife Act. Until now, only a couple of places on the south coast and one site on the west coast were known. This new find is the first site for the species in the north of the Isle of Man.

Like most of the Orthoptera (grasshoppers and crickets), bush crickets are warmth-loving animals and adults are most likely to be seen in the height of summer. It’s likely that the male I met had been basking in the sun until it was rudely interrupted.

Bush Crickets are easily recognised from their very long antennae, much longer than those of grasshoppers. Speckled Bush Crickets are a fetching bright green colour and are, as their name suggests, covered with tiny dark brown spots. Body length is around 12 to 15mm, but the long back legs and distinctive antennae make these insects seem bigger. Females have a 6mm long curved ovipositor which distinguishes them  from males. Both males and females have much reduced wings and are flightless, which raises questions about how the species got to this part of the Island and whether this is an isolated location or not.

This find is spurring on members of the Island’s recently formed invertebrate group to search for more Speckled Bush Crickets. The group exists to increase and improve the recording of our invertebrate fauna, update biological records and train others in identification of insects and other invertebrates.

The more we understand about the Island’s small beasties, the better we will be able plan their conservation.

If you are interested to know more about the invertebrate group and its activities, contact Manx Wildlife Trust via enquiries@mwt.im or 01624 844432.