Explore the Isle of Man Biosphere's 10 Marine Nature Reserves on #MarineMondays. This week, Dr Peter Duncan, Senior Marine Environment Officer for the Isle of Man Government, slows things down to a snail's pace as he tells us about Langness.

Explore the Isle of Man Biosphere's 10 Marine Nature Reserves on #MarineMondays. This week, Dr Peter Duncan, Senior Marine Environment Officer for the Isle of Man Government, slows things down to a snail's pace as he tells us about Langness:

Langness Marine Nature Reserve (Kemmyrk Bea-Varrey Langlish) is one of the largest reserves at 88.67km2, extending from Castletown in the south up to Santon Head in the North, and encompassing the important Langness peninsula and Derbyhaven Bay. 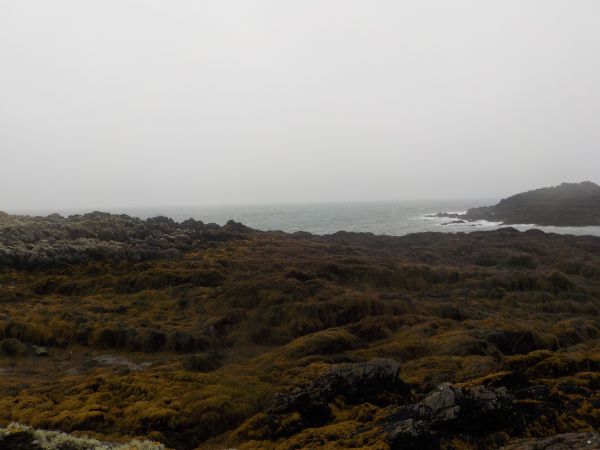 Offshore from Langness, and particularly towards the Scarlett side of the bay, is a good spot for Risso’s dolphins, although this year there has also been regular sightings of a mother and calf off Perwick Bay, too.

The Isle of Man is a seasonal home to a large population of this charismatic dolphin, which is predominantly a spring-autumn visitor here, where they feed on octopus and squid.

Manx Whale and Dolphin Watch record sightings of all local cetaceans, and have a photo catalogue of over 100 individual Risso’s, making the Island an important regional site for the species. 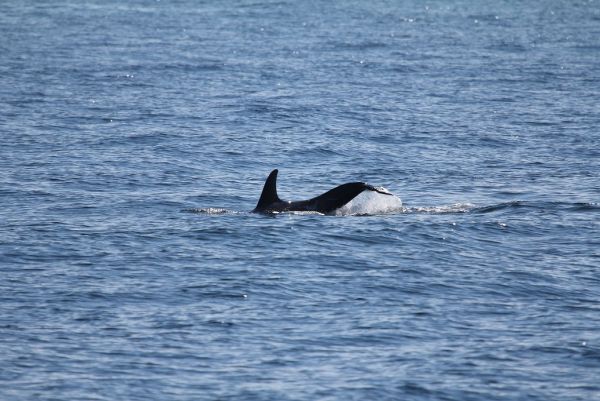 At the northern end of Langness Peninsula, at the causeway to St Michael’s Island, lies Fort Island gulley, or gullet, as most of the little inlets here are called.

Within this narrow channel lies one of our most spectacular eel grass (Zostera marina) beds, and one of only four around the whole Island. As such this eel-grass conservation zone has special status within the MNR, as befits one of 75 formally-protected plants under Schedule 7 of the Wildlife Act.

I’ll discuss eel grass in its own right in the Ramsey Bay MNR article, but for this site you can enjoy a photo taken by Seasearch’s Tony Glen, which led to the re-discovery of one of the Island’s long-lost marine snails. 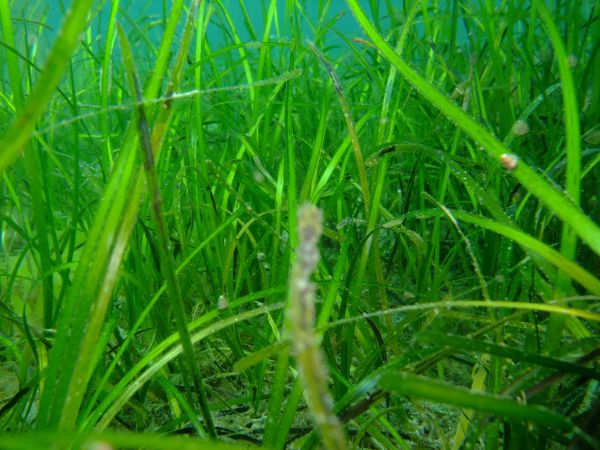 While searching for images of eel grass seed heads to help with the UK’s eelgrass restoration project, I noticed a small topshell on some of the leaves from the Fort Island site.

I hold my hands up to being a bit of a mollusc-nerd and this little topshell reminded me of snorkeling in the Mediterranean. A bit of research led me to the groovy topshell (okay, the grooved topshell, Jujubinus striatus), and it was then confirmed by other experts from the original images and some shell photos.

This is an interesting little snail, often associated with eel grass, but typically a southern species, with no recent records further north than Anglesey. So what’s going on? 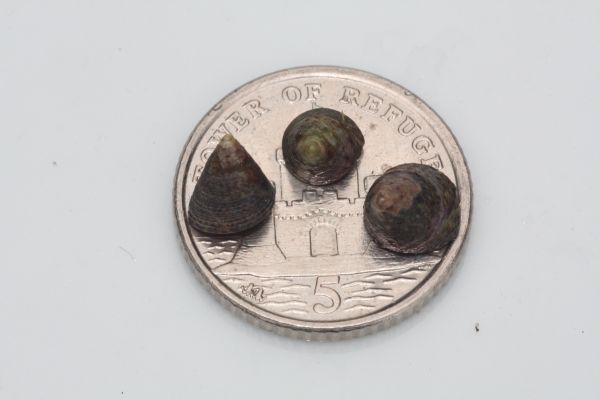 The most famous Manx marine biologist, Edward Forbes (1815-1854), recorded the species in his treatise of the island’s molluscs ‘Malacologia Monensis’ in 1838, although with no location given.

It appears to have been faithfully recorded here ever since - though it’s hard to find an actual reference other than the original, with contemporary sources always citing Forbes.

Early biologists were probably more careful observers and taxonomists than modern specialists, so the original record seems valid, but it’s hard to believe the snail went unnoticed during 100 years of 20th century marine science at the Port Erin laboratory.

Nevertheless, there appear to be no recent records, and so its re-appearance in its traditional eel grass home is either a story of benign neglect or a potential indication of climate change; perhaps enabling re-colonisation from the south, or increasing numbers making them more ecologically ‘visible’.

This trend of ‘comings and goings’ has not been infrequent in recent years, with the common tortoiseshell limpet (Testudinalia testudinalis), of Port Erin and Ballaugh beach fame, all but disappeared northwards, and other southern visitors like trigger fish and streaked gurnard (Chelidonichthys lastoviza) making much more frequent appearances in trawl catches.

Long-term monitoring, as part of MNR management programmes may shed further light on this phenomenon but emphasises the importance of keeping track of what’s here and what’s not.

One final comment on this, it that our topshell’s reappearance has intrigued the Conchological Society of Great Britain and Ireland sufficiently to plan their next week-long field trip to the Isle of Man. So more mollusc treasures likely await in 2021.

Moving round the coast, we come to Derbyhaven, the Island’s only intertidal mud habitat, and a rich haven for burrowing worms and molluscs.

In perusing the list of recorded inhabitants of Derbyhaven muds, I came across Loripes lucinalis, a small (20 mm) almost circular white bivalve, without a common name, but with a decidedly uncommon nutritional strategy.

This remarkable mollusc has an endosymbiotic (other organisms living inside the host cells) relationship with bacteria that colonise its gill tissues and which convert carbon dioxide into organic compounds using chemical energy from sulphur derived from the black, oxygen-free muds that the bivalve lives in.

There seems no end to the remarkable solutions for life that are all around us when we have the time to look and learn; so pause for a moment to consider that this animal:bacteria collaboration is actually helping to reduce atmospheric CO2 and fight climate change its own small way. 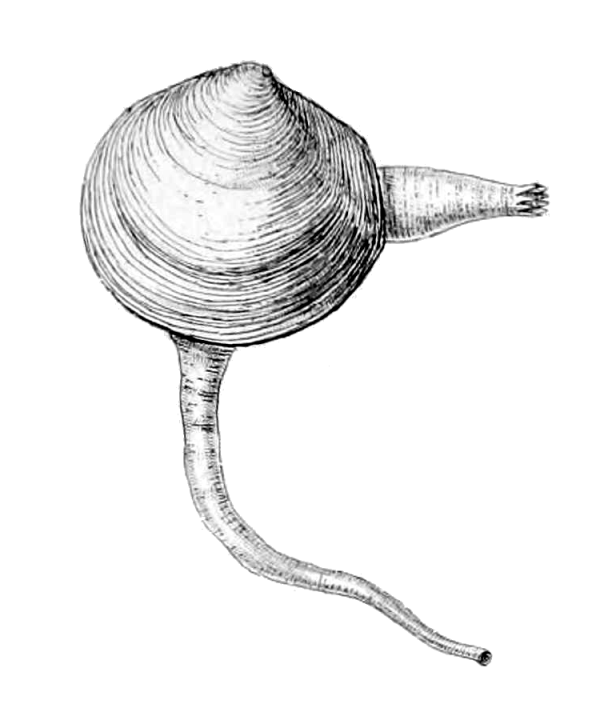 The burrowing beasts of Derbyhaven are, in turn, food for other animals, and so the bay is an important site for overwintering birds that use the area to shelter and keep fed. Notable regular species here include; ringed plover, golden plover, curlew, whimbrel, teal, wigeon, brent geese, godwit, redshank, dunlin and sanderling.

A note of caution though. When enjoying this part of the MNR, the birds are easily disturbed by walkers and unleashed dogs, and though once in a while may be insignificant, repeated flights can reduce energy reserves and increase mortality. So please think about the cumulative effects on local bird life when out enjoying our beaches, and imagine what’s involved taking off under your own steam a dozen more times a day.

Langess MNR is one of several protected marine sites that also join onto a protected terrestrial site, in this case the Langness, Sandwick and Derbyhaven ASSI and bird sanctuary.

So whether you're enjoying the sea or the land here, spare a thought for the smaller inhabitants, and all the great work they’re doing on our behalf.

Loripes lucinalis (from Adams H. & Adams A. (1858). The genera of recent Mollusca: arranged according to their organization. – London: John Van Voorst)