Explore the Isle of Man Biosphere's 10 Marine Nature Reserves on #MarineMondays. This week, Dr Peter Duncan, Senior Marine Environment Officer for the Isle of Man Government, takes us to a reserve with a 300 million year history.

Explore the Isle of Man Biosphere's 10 Marine Nature Reserves (MNRs) on #MarineMondays. This week, Dr Peter Duncan, Senior Marine Environment Officer for the Isle of Man Government, takes us to a reserve with a 300 million year history:

Baie ny Carrickey Marine Nature Reserve is the only one of our 10 reserves with a Manx name – so perhaps it should really be Kemmyrk Bea-Varrey Baie ny Carrickey, to give it its full title.

This protected area also has a rather unique history, since its origins stem from something of a disagreement between different fishing sectors in 2012.

Pot fishermen based in Port St Mary felt their crab and lobster habitats were being encroached on by scallop fishermen and, following formation of a consultation group, an agreement was reached to exclude mobile fishing gear (trawls and dredge) or the extraction of any scallops from inside a line between Scarlett Stack and Black Head.

This fishery-restricted area was therefore the first area, and the only one so far, to be established to resolve gear conflict. It was designated as a MNR in 2018 and covers an area of just over 11km2.

However, the bay’s marine history dates back just a bit before 2012, as the numerous fossils in the limestone ‘ledges’ at Port St Mary will testify. These carboniferous rocks are more than 300 million years old and were formed at the bottom of a shallow sub-tropical sea.

The fossils are fairly obvious on the rock platforms once you get your eye in, and are in various stages of erosion; they include colonies of corals, as well as solitary coral ‘horns’, bryzoans, the odd ammonite, as well as ‘sea lillies’, or crinoids, the stalked ancestors of our present day brittle stars which still inhabit the bay today (see photo from last week’s Calf of Man MNR).

I love that there’s a 300 million year history of similar marine animals in the same place. Perhaps we can learn something about longevity from these delicate echinoderms that, believe it or not, are actually our closest relatives amongst the invertebrates. 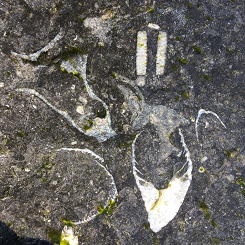 To explore this area from the land, there is a recommended walk, one of a series of ‘Blueways’, that will take you from the maritime history of Port St Mary down to the prehistoric origins of the ledges, which is also one of the Island’s Areas of Special Scientific Interest (ASSIs) - see here.

Let's jump forward a bit, to around 1652, when the Port St Mary ledges played host to another famous marine animal, although in this case, it’s unfortunately famous for being extinct.

The Great Auk was a large North Atlantic seabird, up to 85cm high and weighing 5kg, but more of a diver than a flier, and its flightless-ness, tastiness (and human greediness) ultimately led to its demise around 200 years later.

The 17th century watercolour painting by Daniel King, used to illustrate a book called 'A Short Treatise on the Isle of Man', and now in the Manx Museum, was originally thought to represent a puffin, but expert attention in 1939 noted the distinctive white head patch of the great auk.

Subsequent research, published in 1971, which included the finding of great auk bones in a cave near Perwick Bay confirmed its presence on the Island, and in the same area. 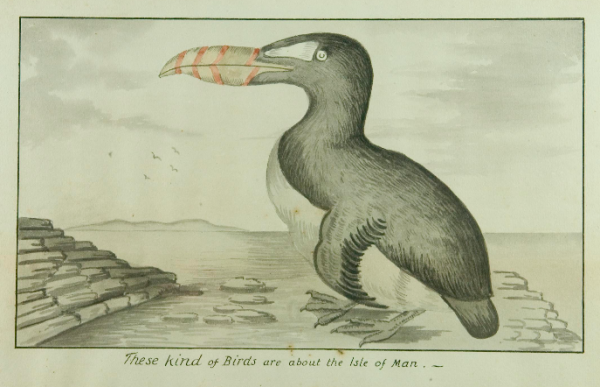 The original painting can be seen in the museum, or online here

Perhaps we can take some comfort to learn that the Great Auk’s closest relative, the razorbill, is still with us today, and still living in this MNR. That said, Manx Birdlife’s 2019 seabird survey showed that this species too has declined by 55% in the 20 years since the last comprehensive survey. As such, lets take notice and action now, and not be witness to another local seabird extinction. 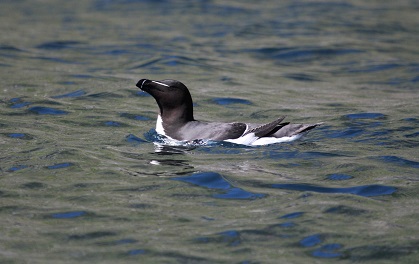 Razorbill at the Sugarloaf

Thankfully, Baie ny Carrickey MNR includes one of the Island’s most important seabird breeding areas from the Anvil to the Chasms, including the Sugarloaf, a multi-storey pile of rock and guano.

This whole area is the summer home to thousands of pairs of common guillemots, and hundreds of pairs of kittiwakes, fulmars and razorbills, and a boat trip to the Calf from Port St Mary, is a truly memorable experience, especially at this time of year. 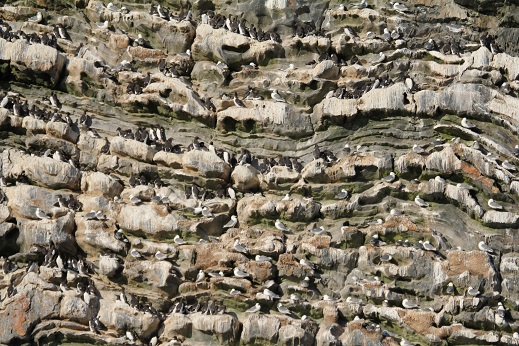 Common guillemots and kittwakes on the sugarloaf

Our MNRs are not only sites for observation and recreation, and BNCMNR has had its fair share of scientific research over the years. The ledges were an important site for intertidal ecology work during the Port Erin laboratory period and, subsequently, both habitat mapping and fisheries research has been conducted in the bay by Bangor University.

The habitat work in 2015 by Bangor student Lucy May used various underwater cameras to map the various seabed types and dominant organisms. As a result a comprehensive underwater ecology picture of the bay was developed, providing an important resource for management planning and monitoring, whether for conservation or sustainable fisheries.

One of the most important habitat/species types found in Baie ny Carrickey is the eel grass, Zostera marina, which was found in a relatively small patch off Gansey Point in 2014. See the bright pink area on the map, next to the black and purple habitats.

This rare marine flowering plant is found in only a few sites around the island, and its importance for providing shelter for other species, and for the future of carbon sequestration by marine habitats, so called ‘blue carbon’, will be covered in detail in a later article. Meanwhile, this particular eel grass patch is now specially protected within the MNR.

We end where we started, with the pot fishery for lobster and crab in this special bay. The exclusion of mobile fishing here has brought benefits to the local potting sector, which has always been important in the area.

The original exclusion enabled the trial of new management measures with a group of established fishermen, and which lasted several years.

Although this ultimately proved to be inconclusive, it was the first time that area-coordinated research had been conducted on this fishery, and valuable lessons have been learned for its future management.

One interesting legacy of the trial is that the minimum landing size for lobster in the bay is 90mm carapace length (versus 87mm elsewhere) and 135mm width for crab (versus 130mm elsewhere).

There is also a maximum size of 120mm carapace length for lobsters applied here, for both commercial and hobby potters, which is unique around the Island. 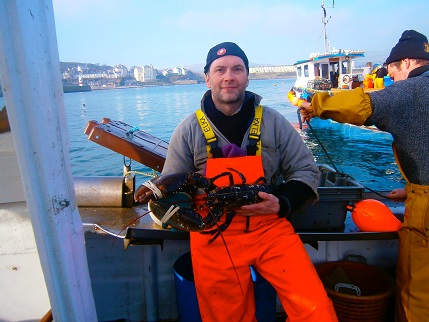 Baie ny Carrickey MNR is a fascinating place where an awful lot has been going on for a very long time. Go and have a closer look!

Great Auk paper: Garrad LS (1971) Bird remains, including those of a great auk Alca impennis, from a midden deposit in a cave at Perwick Bay, Isle of Man. Ibis Ecology 114:258–259. Marine Habitat Classification for Britain and Ireland.

Partner profile: Recyclecollect.im
Businesses and Biosphere work together for greater sustainability
Jewellery inspired by the nature of our Biosphere
Biosphere Partners' bee health study
'In the Isle of Man, we dont just say it - we do something about it.'
Su Simpson's #MyBiosphere