Dr Peter Duncan, Senior Marine Environment Officer with the Isle of Man Government, tells us about an exciting long-term data project happening in our waters.

Dr Peter Duncan, Senior Marine Environment Officer with the Isle of Man Government, tells us about an exciting long-term data project happening in our waters.

Most of us will be aware of the observed and potential effects of climate change on our natural environment, including in the sea. For example, the Port Erin sea surface temperature time series, collected between 1904 and 2016 has a fairly typical trend of a gradually rising temperature, accelerating in recent decades. 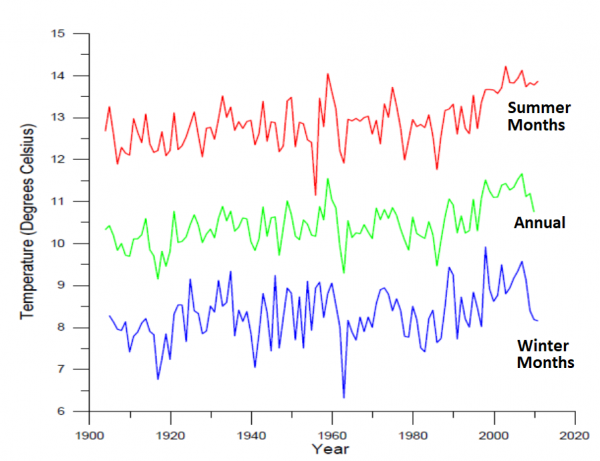 So it might be reasonable to expect other marine effects to be observed around the Island in future, although typically they don’t occur rapidly, but slowly over time. This gradual change can be potentially dangerous, partly because people and animals get used to the new normal – they adapt; and because we forget how things were previously we experience the idea of ‘shifting baselines’.

Problems can arise when we are unaware of gradual change, and so we are surprised and unprepared for the resulting rapid change events. For example when natural systems suddenly reach a limit of tolerance and collapse, or when components of a system, such as an individual species disappear gradually over time. The latter situation can have significant effects if those species are for example, part of a food chain, or perform a controlling or regulating function in their wider environment. 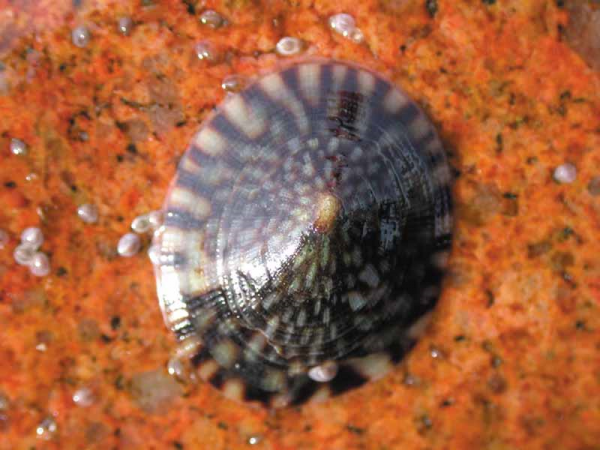 The (not so) common tortoiseshell limpet, Testudinalia testudinalis, a cold-water species that hasn’t been seen for several years now but was formerly fairly frequent at Port Erin, Fleshwick and off Ballaugh. (Image by Nova Mieszkowska. Copyright: MarClim)

Therefore, we need a long-term data series that will help to show whether and how gradual changes have taken place, from past to present, and what the nature and magnitude of those changes has been (for example, the earlier mentioned Port Erin sea temperature data). With the right information we can hopefully respond more quickly and appropriately, and give ourselves more time to adapt to changes in things like plankton and fish populations, invasive species, ecosystem services or sea-level rise.

One such time series has been conducted by a long-time ‘Manxophile’, Professor Steve Hawkins, formerly of the Port Erin Marine Laboratory, and most recently of the University of Southampton. Steve did his doctoral research on the intertidal limpet communities of Port St Mary ledges, so is very familiar with Manx shores, and has been helping us to better understand our small-scale shore ecology, as well as the wider-scale effects and implications of climate change.

Part-funded by the Isle of Man government since 2008, and working with other researchers in the UK using the same methodology (science geeks see here). Steve has visited the Island annually, with the exception of during Covid-restrictions, and collected equivalent Manx data to combine with up to 80 UK shores. This provides a comparable and long-term data series to monitor regional trends.
Of course, the local information collected can also inform local changes, and with survey sites around the Island including; Port St Mary ledges and Kallow Point, Port Erin, Scarlett Point, Niarbyl, Fenella Beach and Ramsey Harbour as regulars, in addition to a few opportunistic shores, there is good Island-wide coverage. 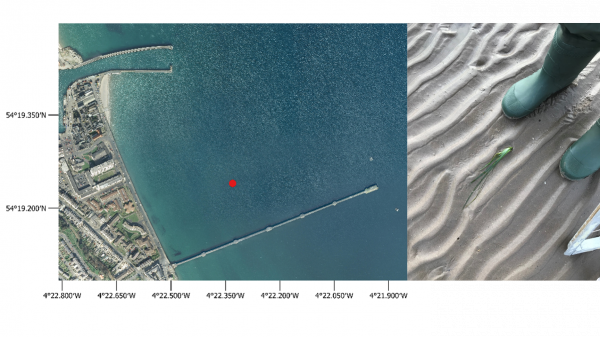 Steve comes to the Island every year to catch the low spring tides during late summer and early autumn, and by visiting the same sites, using the same approach, the data is comparable over years and also between sites. Specifically, he monitors up to 60 ‘indicator species’ (or bio-indicators) with a particular focus on changes in abundance from year to year, the appearance of warm-water species and decreases in northern, cold-water species. Such changes in these latter populations may be important in consideration of the future prospects for commercial and recreational fishing.

Similarly, for the appearance of non-native species, the sooner they can be found, identified and assessed as to their potential risk, the better it is for our ecology and economy. Islands are particularly vulnerable to invasive species, and it’s estimated that they cost the UK economy around £2 billion annually. As an example, Holyhead marina in north Wales spent nearly £1million trying to eradicate carpet sea squirt, an invasive Japanese species, and so surveys around the coast can help with early identification. Locally, Steve has paid particular attention to the development of the colony of Australian barnacles and Pacific oysters on Ramsey south breakwater. Neither of these are considered particularly problematic to local ecology, but we do keep an eye on them and Ramsey provides an important study site and a time series. 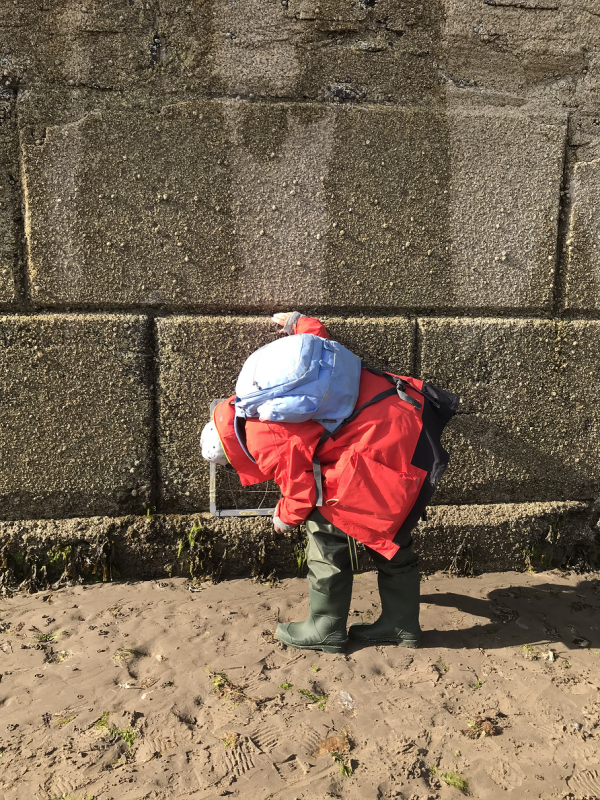 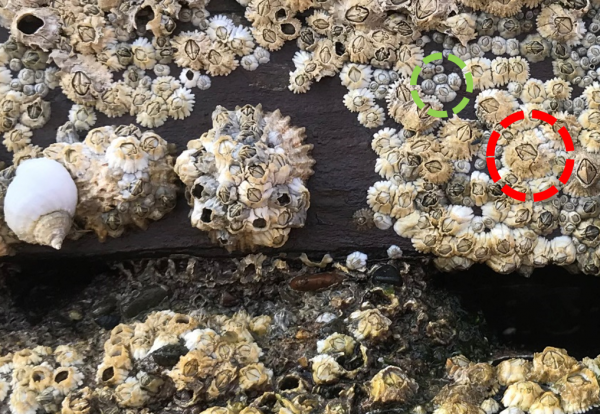 The continuation of these long data sets also helps to sort out the inherent ‘noise’ in annual variability, like what is climate change and what is natural variation? If we understand and compare the extent of warming periods, like the 1940’s and 50’s and their effects on animal populations, versus cooling periods seen in the 1960’s- 1980’s, and then more recent warming periods, we may be better prepared for the future.
From my perspective, as the DEFA Marine Environment Officer, Steve’s visits offer an opportunity to chat about potential changes in biodiversity as well as looking for some rarer creatures. Steve’s expertise and long memory puts our Manx critters into the wider regional picture, and helps with my work on managing the network of Marine Nature Reserves as well as adding species records to the NBN Atlas, an ongoing record of our biodiversity. 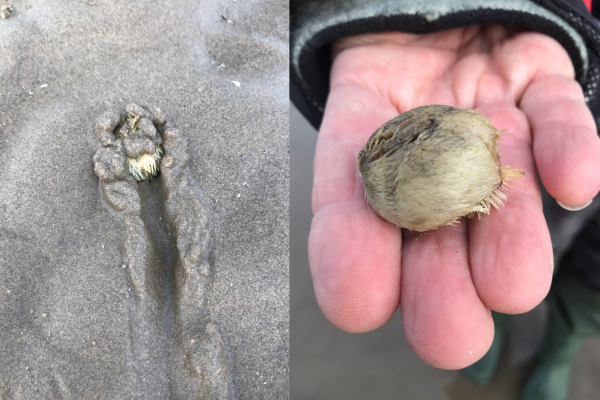 Common heart urchin Echinocardium cordatum, or sea potato. One of many found burrowing in sand near Ramsey south breakwater during the intertidal survey, July 2022

Steve has also revised the Climate Change chapter in the Manx Marine Environmental Assessment, a large-government-coordinated report on the knowledge base of the territorial sea.
So, whether it’s new species or old ones, rapid changes or slow, it is really important to be in the field and collect data with regional collaborators, thereby helping to provide the evidence for long-term planning and decision making.

A very important final word of thanks to the kind person who found Steve’s data notebook at Scarlett Point earlier this year, and handed it in to the RNLI guys at the Castletown World Tin Bath Championships. Phew!