The characterful Highland cows at Langness attract much interest and are much photographed. But they have a serious job to do. Ecosystem Officer with DEFA Sophie Costain tells us how they are contributing to conservation.

The characterful Highland cows at Langness attract much interest and are much photographed. But they have a serious job to do. Ecosystem Officer with DEFA Sophie Costain tells us how they are contributing to conservation:

Conservation grazing with Highland Cattle is back on the land around the Langness Lighthouse after successful seasons in 2018 and 2019.

This land forms part of the Langness, Sandwick and Derbyhaven Area of Special Scientific Interest and Bird Sanctuary, a site of high ecological interest. The peninsula is a UNESCO Biosphere Isle of Man core area.

The hardy cattle are from Moorhouse Farm, Colby, farmed by Paul Costain. 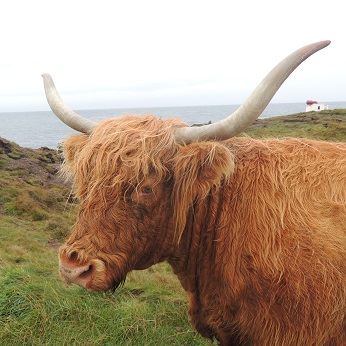 Their summer loan was chiefly introduced to benefit the Lesser Mottled Grasshopper, which is protected under the Wildlife Act 1990. The Langness peninsula is the only place in the Isle of Man, and one of only three places in the British Isles, where the insect is found.

Lesser Mottled Grasshoppers have specific habitat requirements and cattle grazing is key for habitat maintenance. The grazing should also help to extend the grasshopper habitat and expand its range.

The cattle also reduce the thatch of grass, which allows flowering species to grow, pushing back and reducing the growth of gorse while maintaining suitable habitat for scrub-nesting species. Their dung is a great source of food for invertebrates and birds.

There are public footpaths through Langness but walkers are asked not to get too close to the cattle.

Although docile, they are powerful animals that can become can be spooked by sudden movement.

Surrounding land is privately owned and the public is asked to respect this, stick to established footpaths, keep dogs under control and close gates.

We thank the landowners for their continued support of this important conservation initiative.