Andrew Cooper, General Secretary of the Manx NFU, writes about how the farming industry is conducting an innovative audit of its carbon output, providing a key contribution to the Isle of Man's climate change targets.

Andrew Cooper, General Secretary of the Manx NFU, writes about how the farming industry is conducting an innovative audit of its carbon output, providing a key contribution to the Isle of Man's climate change targets.

My job description has a key line in it that sounds really impressive. I am ‘permanent senior official responsible for representing the Manx NFU'.

In reality, that can mean anything from spending a day in a school running a class on hedgerows to picking up cow pats in a show tent and washing it off the head of the poor calf it landed on. Mostly it's lobbying but it includes everything else in between.

One of the more time-consuming tasks is correcting misinformation or defamatory comments made about Manx agriculture. It's never as simple as just telling someone they are wrong. We have to be able to prove it, as well.

“Farmers are destroying the planet”

“One cow is responsible for more CO2 than an aeroplane”

“Cow burps are the problem”

“Farmers are why we will lose our biosphere status as they are pillaging the soils and destroying the Island with all the sheep and cows everywhere”.

Are all phrases that come up on a regular basis, thrown out as off-the-cuff comments or in passing. It’s nothing new hearing them.

But criticisms, and being able to defend them, are the reason the Manx NFU got so heavily involved with Biosphere right at the start, in 2012, and have been key stakeholders from day one.

After all, 88% of the land on the Isle of Man is either farmed or managed using farming practices.

The full title of the UNESCO Biosphere programme is ‘Man and the Biosphere’ and this is how our Island nation lives and works within a biosphere; something the farmers I represent love so dearly and will defend to the hilt.

But how do we counter the rhetoric we get bombarded with on an almost daily basis? Education is our tool of choice.

Sometimes it is easy to discredit things people have found on facebook and point them in the direction of correct information. Sometimes we just don’t engage, because the person commenting has extreme views and will never listen to reason. But the best way to win a debate is with facts – the truth.

A couple of years ago, when the Chief Minister announced a climate emergency, criticisms of Manx farming began in relation to our carbon footprint. At first it was subtle: being sent Googled articles quoting US figures about hyperfarms with more livestock on one farm than we had in the entire Island.

Then it was more targeted: picking on individual farms accusing them of being polluters.  Our member came to us and asked how they could combat this because they didn’t think they were that bad.

Examining a report the Isle of Man Government commissioned, I realised it didn’t use Manx figures in its calculations. They were based on internationally recognised values and previously accepted IPCC figures – the average value.

I went back to our members and explained we could not defend ourselves with facts when we didn’t even have a baseline of how 'good' or 'bad' Manx farms were.

I convened a meeting of the Manx NFU's Environment and Land Committee and we devised ‘Project Carbon Audit’.

Via carbon audits, experienced agricultural consultants help businesses to establish their carbon footprint, identify the sources of emissions and (through comparison to others) help identify areas for improved operational efficiency.

The aim of this project is to better understand the impact of farming in the Isle of Man has on the environment through its carbon footprint, and to report baseline data which can be then used to evaluate the potential to reduce greenhouse gas emissions through changes in management practices.

Focusing on 10 Manx farms, data supplied by the farmers describe farm management practices (stocking rates, manuring/fertiliser practices, cultivations etc), a carbon footprint is calculated for the farming unit (to the farm gate and taking into consideration the carbon costs of all inputs to the farm).

The approach will be to simulate the net greenhouse gas emissions from the daily activities of running the farm system (energy, livestock, cropping and land management), and to express them in Co2 equivalents.

The first job was to work out how to pay for it because experienced farm consultants are not cheap. We successfully applied for a knowledge and innovation grant from Government, which will also benefit from our findings.

We engaged the services of Chris Kneale, from the Rural Business Consultancy, who has a wealth of knowledge and more than 20 years' experience in agriculture on the Isle of Man.

We set out with the intention of completing 10 farms in the first round of auditing: Three dairy units, three mixed units, three arable units and one specialising in horticulture/vegetables.

Before Covid slowed us down, we completed three dairy units, two arable units and two livestock units, ranging in size from 200 to 5000 acres, using an internationally recognised carbon calculation tool.

The audits involved collecting data and categorising the carbon emissions into eight areas:

Sequestered carbon has been estimated by estimating the areas involved in the following areas: woodland, hedgerows, recycling, field margins, wetlands.

The first set of results using this calculator were interesting but nowhere near our target of net zero. It was a massive frustration. About 70% of the Isle of Man is best suited to growing grass because of our temperate climate and undulating hills. This means we could grow other crops if we ploughed and cultivated intensively but they would have very low yields or fail completely and financially they would just not be viable.

Our first set of results not including grassland: 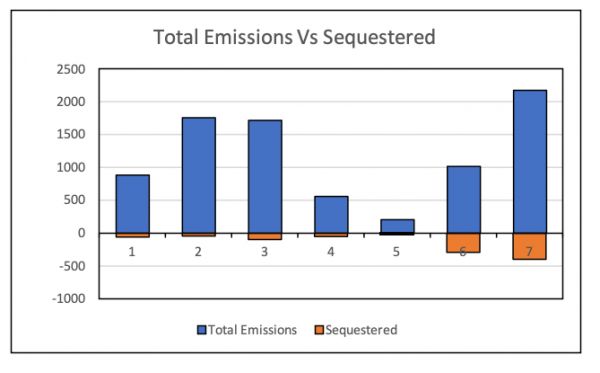 When calculating carbon values on farm something was missing. There was no calculation in the grass that’s grown on the farm.

The sequestration areas are all unfarmed areas (hedgerows, trees, field margins, wetlands, recycling). So we did more work and found there is an internationally recognised figure for grassland as it is not a regular area identified.

This is likely due to the variability of grassland in terms of types, location and management.

We have since commissioned work on grassland which has returned some excellent results but that’s for another day.

Sequestration on farm (not including grassland):

Did you know, at 5000kms, the Isle of Man has more hedgerows per square kilometer than any other country in the world? 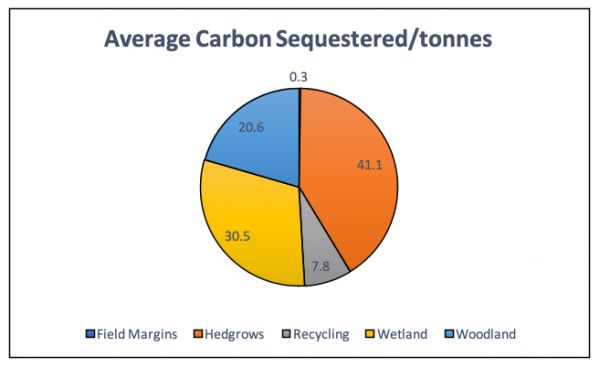 But when we added grassland to the calculations that was the real epiphany: 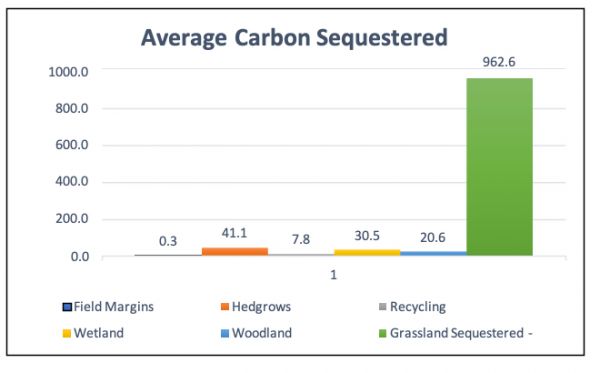 There is lot more work required to understand the carbon sequestration of grassland and also the different cropping techniques. What is clear is that where the carbon cycle is as self-contained as possible, the carbon balance is closer to neutral than where large amounts of inputs are required.

This was the first graph after we included grassland in the calculations: 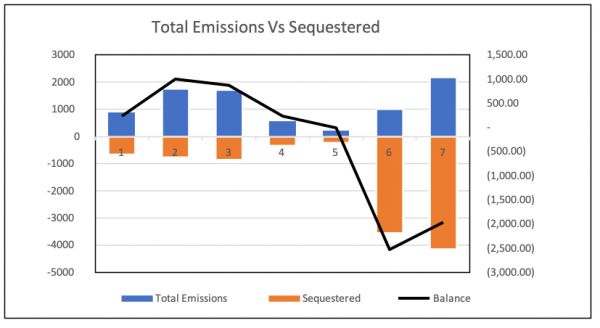 There is a balance to be struck between stocking rate and efficiency and there are likely to be scenarios where reducing stocking rate can positively influence the carbon balance, where, for others, increasing the stocking rate may be beneficial.

There are a number of key areas that will improve both financial performance of businesses and also their carbon balance.

Reducing waste, implementing low or no tillage techniques and using tillage on other areas, efficient animal health management to reduce mortality and culling, utilising more productive grassland techniques to aid animal performance and sward longevity, matching nutrient supply to demand, better use of clovers and reduction of nitrogen fertilisers, planting and maintaining hedgerows, trees and conservation strips are all areas where focus will improve both farms' carbon balance and profitability.

The Manx NFU recently presented its report to the Government and asked for support to expand its carbon auditing to cover at least 50 of the Island's 340 farms and to carry out 'deep dive' work on soil health to ascertain the active carbon content of Manx soils.

It’s exciting work which will give the facts we need to prove our position and know exactly where Manx agriculture is in relation to carbon sequestration and achieving net zero.

We are not ready to put any dates on it yet. We have a lot of work still to do but we do know it will be a long time ahead of the 2050 target that’s already been set for the Island to be carbon neutral.

The key message we have taken from the work so far is that agriculture is part of the solution and the Island can’t achieve net zero without it. We'll keep you posted.

'The agricultural sector is very much part of the solution to decarbonising the Manx economy and achieving net zero. We are working on proposals for schemes to introduce policy incentives to bring to life net zero for Manx farmers. But we will only be able to achieve our carbon goal with support from Government, industry and other key groups to deliver this'