Our #CloserToNature series of blogs aims to keep us connected with nature this spring while staying at home. Dr Peter Duncan, Senior Marine Environment Officer with DEFA, writes of the upsides of working from home, including the chance to connect with some of the nature and geology close by.

Our #CloserToNature series of blogs aims to keep us connected with nature this spring while staying at home. Dr Peter Duncan, Senior Marine Environment Officer with DEFA, writes of the upsides of working from home, including the chance to connect with some of the nature and geology close by:

This strange, enforced semi-imprisonment is not something that any of us would choose, but since we’re stuck with it, let’s look for the positives.

Since the remote technology is working rather well, the main change I’ve noticed is the new workplace view. I finally tidied my sunroom, and set up a desk overlooking the garden, and given the weather at the moment, it’s now doing what a sunroom should do. This gives me the chance to watch my garden coming to life as spring starts to spring. 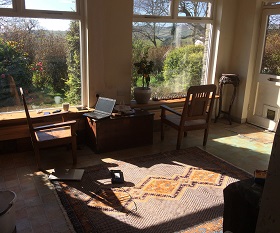 This morning, goldfinches were feeding on unopened dandelion seed heads and the open yellow flowers have been attracting honey bees, bumble bees and some early season peacock butterflies.

One particular bush has been hotly contested today, with blackbirds, song thrush and house sparrows competing for this prime nesting site. I’ll keep you posted as to the eventual winner (update: it was the song thrushes!). 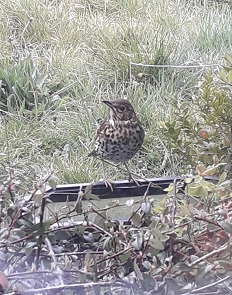 I have also tried to take a daily exercise break, usually on bicycle to make up for the loss of my daily commute from my home in the south of the Island to DEFA at St John's.

Today was perfect for cycling, sunshine, light winds, and a distinct absence of cars; all of which lends itself to a more leisurely ride, and a chance to look at nature, rather than passing cars.

A loop around Pooil Vaaish provided beautiful views over Baie ny Carrickey marine nature reserve, with the late-afternoon sun heading down towards the Drinking Dragon and the Calf of Man.

My eye was also caught by the stone walls, which are such a feature of the Manx landscape, but which change according to the local ‘ingredients’. 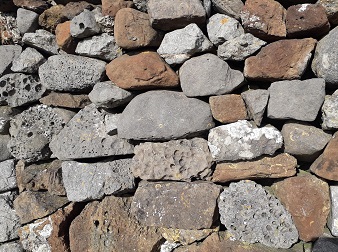 The Pooil Vaaish area is perhaps most famous for the quarrying of Manx slates, made from Ordovician mud and sandstones around 495-470 million years ago, but the area also had a more recent period of volcanic activity (only 330 million years ago!) which has provided some local wall building material in the form of vesicular basalt – a Swiss-cheese like rock filled with ancient gas bubbles.

Rather romantically known as the Scarlett Volcanics, these various lavas now provide an intertidal jumble of crags and rock pools for shelduck, oyster catchers, mallards and eiders.

And, I saw my first definite swallow of the year, after a ‘maybe’ sighting two weeks ago in Castletown.

So, with our new-found change of pace, let’s enjoy the best of Manx nature during this spring season.