Captain Stuart McKenzie is June's guest author in the #MyBiosphere series that features in Business 365 magazine, published by Mannin Media.

Captain Stuart McKenzie is June's guest author in the #MyBiosphere series that features in Business 365 magazine, published by Mannin Media

May I explain? On 30th December 1969 we took up permanent residence on the Island and scrapped our English passports.

Of course, we had been here during that year preparing the way by buying a plot of land at Greeba Bridge and instructing Threeways Construction (remember them?) to part-build a detached house in what was originally part of the garden of the Mill House.

I say part-build as our funds were somewhat restricted, I having recently completed a very mature student degree in nautical science at Plymouth. We planned to finish the painting and much of the external work ourselves.

Driving off the ferry on a crisp afternoon we navigated to the heart of the Island, expecting to be greeted with our magnificent new abode but found instead some rudimentary footings and no builders.

‘Traa dy liooar’, the new neighbours exclaimed. Time enough? Time enough for the builders to carry out the build for which we had paid the various stage payments when demanded? It took a visit to the erstwhile Eric Kneale at the redoubtable advocates Kneale & Co to resolve the issues.

I observed, then, the closeness of Manx society when Eric rang two notable political luminaries to help with the resolution.

That visit to the advocates was the beginning of a long relationship with Eric and then Peter Kneale who helped us establish the M&G Group of Companies over the years.  Even from the first year of operation with Marine & General Computer Consultancy (IOM) Ltd we emphasised our Island base and it was not a brass plaque venue.

I had chosen the Isle of Man for three reasons, its central location in the British Isles and excellent air connectivity to the head offices of the shipping companies we were targeting; its beneficial corporate tax structure, allowing us to charge lower consultancy fees as a start up consultancy; and as an area of outstanding natural beauty with a laid-back lifestyle. 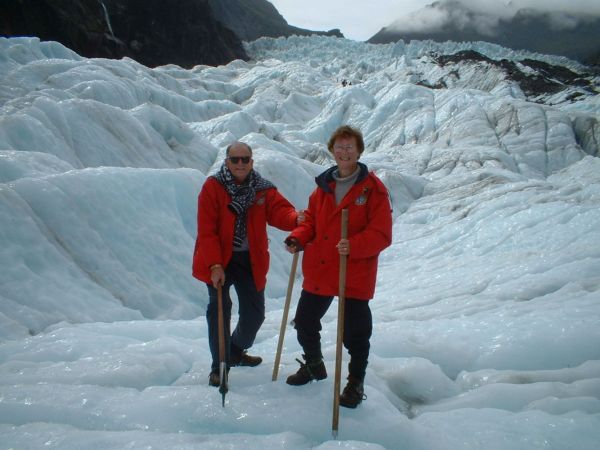 Captain McKenzie and his wife Barbara on the Franz Josef Glacier, New Zealand

It gradually emerged that, although the first two reasons were important, it was the third that had the most beneficial effect on my life experience.

In the early seventies, very few shipping companies had embraced computers and so I was forever flying off (no jets then) to London, Newcastle, Liverpool, Dublin, etc, to help many companies begin utilising IT for the benefit of both ship and shore operation.

It was the return to the Island which was so important. The first step back onto the tarmac at Ronaldsway, despite the whiff of Avgas, allowed one to breathe in the clean Manx air. Remember that the clean air acts had not yet been introduced and smog was prevalent in nearly all UK cities.

Then, as you drove into the Manx countryside, through Foxdale and St John’s and onto the TT course heading for home at Greeba Bridge, you could shrug off the stress of crammed pavements and smoky rooms and, yes, breathe again!

Of course I had to learn that, as a comeover, it was up to me to adopt the lifestyle and fit in. I hope I did.

As 10 years passed and we became stayovers, we moved to Maughold, the premier parish of the Isle of Man, as our new residence had five acres, which was more than enough to keep poultry of all kinds.

Twenty years here and we graduated as stopovers and at 40 there were mutterings of 'I don't think he’s going back.’

So, on our golden anniversary, perhaps we are ‘Almost Manx’. However, when I made this observation to a former Chief Minister at a formal lunch, he laughed and said: ‘Only 20 or so years to go, then...’

Captain Stuart McKenzie, often referred to as the ‘Father of Manx Computing’, brought the first computers to the Isle of Man in the seventies and the internet in the nineties. Post retirement, he chairs the McKenzie Trust, which helps Manx businesses set up or expand, and is project manager for the restoration of Ramsey’s Queen’s Pier.