Isle of Man represented at COP26

The Glasgow summit provided a platform for the most significant climate crisis talks in years, where topics such as halting and reversing deforestation, making green tech cheaper than alternatives, phasing out coal and fossil fuels, and climate finance were discussed.

For the Isle of Man, COP-26 was very successful. It was announced during COP-26 by Greg Hands MP, the UK Minister of State for Business, Energy & Industrial Strategy (BEIS), that the UK and the Isle of Man had reached an agreement in principle to extend the UK’s ratification of the Paris Agreement to the Isle of Man.

This agreement in principle follows lengthy negotiations between the Isle of Man and the UK Government, which includes a full review of the Island's plans to reach net zero by 2050 - a goal also pledged by the UK and many developed nations. This agreement also means that the Island has to comply with the treaty's obligations and the UK's overall target to reduce greenhouse gas emissions. The Island will be able to do so by setting its own targets and paths.

The Isle of Man had the opportunity to showcase images and quotes from young people from the Isle of Man on why we need to act now to tackle climate change during the Youth and Public Empowerment Day. 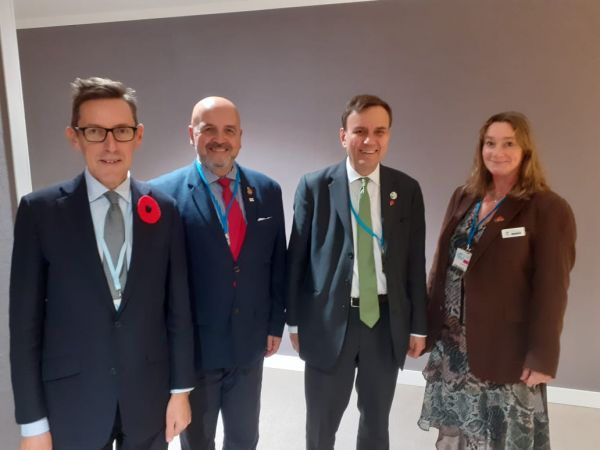 On Nature Day at COP-26, the Isle of Man showcased our compelling story on our upcoming blue carbon project, highlighting how we will map, manage and maximise our blue carbon resources. The footage showed the beauty of the marine environment, and the need to protect our oceans alongside our scientists' work in helping to protect it for future generations.

Meanwhile, on-Island, a programme of activities during COP-26 was carried out by Net Zero Isle of Man and key stakeholders to highlight the significance of the conference and local climate change action:

To conclude two weeks of activities and climate information, an in-person event, Together for Our Planet, was hosted by Net Zero Isle of Man and Gef, where members of the public had the opportunity to talk to experts on various topics about climate change.