Awards celebrate those contributing to a sustainable future

Organisations contributing to a more sustainable Isle of Man were recognised today at the fourth UNESCO Biosphere Isle of Man Awards.

Organisations contributing to a more sustainable Isle of Man were recognised today at the fourth UNESCO Biosphere Isle of Man Awards.

The awards celebrate those contributing to the Man and the Biosphere Programme’s global aims of sustainable development, conservation and education.

They are organised in line with the five Es of UNESCO Biosphere Isle of Man’s local strategy, ‘Working Together for a Sustainable Future’.

The economy award went to Capital International Group, whose Conscious Capital programme helps clients secure financial goals while supporting sustainability. It is being continuously researched and developed to assess new opportunities. This is backed up by determined in-house actions. 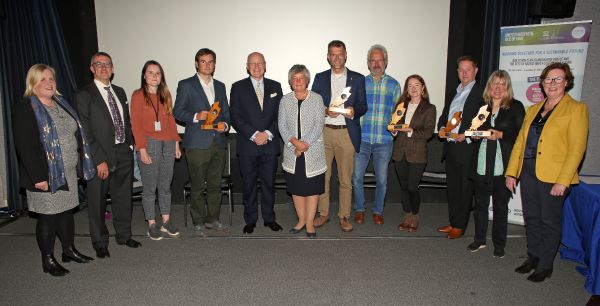 The education winner was One World Centre (Isle of Man), which delivers education for a just, sustainable, world, using the UN Sustainable Development Goals as a framework, by holding a One World Charity Challenge, mock COP 26 climate conferences, a Fairtrade conference for schools and trail in Douglas, global teacher training and arts activities, to name but a few activities.

The energy award went to Zurich on the Isle of Man which, on the roof of its car port at its headquarters, has installed a solar array it believes to be the biggest in the Island in terms of generation, consisting of 540 panels, with the ability to generate 206 kilowatts of electricity, around 70% of the company’s annual need.

The enjoyment and engagement winner was Versa, a small footprint restaurant in Port Erin that celebrates the Island’s Biosphere status and engages the public on issuing including foraging and eating more sustainably.

The environment award went to the entire farming community and farming support community, which has adopted the Isle of Man Government’s Agri-Environment Scheme, delivered by Manx Wildlife Trust. In its first year alone, 160 farm businesses participated and almost £1.5 million was committed to schemes that improve habitats for nature on land that is farmed.

Winners were chosen by a panel of judges from Government and the private and third sectors. Judges commended the high quality of entries.

The beautiful, hand-crafted, awards were presented at a ceremony at the Manx Museum by the Lieutenant Governor, His Excellency Lieutenant General Sir John Lorimer KCB DSO MBE, and Lady Lorimer MBE.

Winners will be eligible to use a special logo, as well as featuring in next year’s promotional video.

Jane Poole-Wilson, Deputy Chief Minister, was the main speaker at the event.

She said: ‘It behoves us all – policy-makers, organisations, individual citizens – to live by the Biosphere ethos and effect positive change.’

The Deputy Chief Minister told entrants: ‘You are here today because of your impressive contribution to that sustainable future.

‘The awards have attracted a wide variety of entries and I, for one, am glad I was not a judge as they had some very difficult decisions to make. My thanks go to the judges.’

The Deputy Chief Minister continued: ‘The range of projects and the impact of work that is underway is hugely inspiring and these awards provide an opportunity to showcase this and raise awareness of the impressive initiatives going on right across the Island to effect positive change.

‘So, whether you win an award today or not, please celebrate the fact you are here, be proud of your achievements, and shout them from the rooftops.

Your positive work not only contributes to a sustainable future – it influences and inspires others, which is the lasting legacy of these awards.’