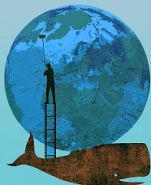 A competition will encourage young filmmakers to give their ‘take’ on the future of our Biosphere and our planet.

Little Green Shoots forms part of the 2019 Isle of Man Film Festival, which has the theme ‘Our Planet’.

Supported by UNESCO Biosphere Isle of Man and the Department of Education, Sport and Culture, the competition encourages under-16s to pick up their phones, tablets and cameras and create a short film which explores the idea of ‘Our Planet, Our Island’.

In line with the festival's theme, films will be judged on their ability to embrace environmental and green themes – whatever this means to the filmmaker.

Christy DeHaven, co-director of the Isle of Man Film Festival, explained: ‘Filmmaking is an important storytelling medium and, in an age where many of us have cameras in our pockets or the palm of our hands, we can all become filmmakers and express our opinions, passions and have a say in our future.

‘We ran our first under-16s competition last year and had an incredible standard of entries, so we’re really excited to see what our young Manx talent will be inspired to create under this theme.’

The competition is open to anyone under 16, with an entry deadline of July 12th 2019. Films should be a maximum of five minutes in length, loaded to a private Youtube link and that link then submitted to christy@isleofmanfilmfestival.com

Jo Overty, Project Officer for UNESCO Biosphere Isle of Man, said: ‘Young people are a powerful voice, and film a powerful medium, to influence moves to a more sustainable future.

‘There is superb work going on in all our schools to learn about the issues affecting the future of our Island and our planet and to bring about change.

‘The competition provides a great platform for young people to convey their messages while showcasing their creative skills.’

The competition will be judged by representatives of the public and private sectors and shortlisted films will be shown at the festival, which takes place from 4th to 8th September.

The winner will be announced by Mark Kermode, who will present prizes for both individuals and their respective schools.

For more information on the Isle of Man Film Festival and terms and conditions for Little Green Shoots, visit www.isleofmanfilmfestival.com