Explore the Isle of Man's 10 Marine Nature Reserves (MNRs) on #MarineMondays. As we continue our anticlockwise journey around the island, this week we’re not moving very far into the West Coast MNR, partly because there’s so much going on around the Point of Ayre, particularly in relation to its seabirds. Dr Peter Duncan, Senior Marine Environment Officer, writes.

Explore the Isle of Man's 10 Marine Nature Reserves (MNRs) on #MarineMondays. As we continue our anticlockwise journey around the island, this week we’re not moving very far into the West Coast MNR, partly because there’s so much going on around the Point of Ayre, particularly in relation to its seabirds. Dr Peter Duncan, Senior Marine Environment Officer, writes:

The Point of Ayre is known for its strong tidal currents, delivering abundant nutrients and attracting various marine species to feed, which in turn attracts top predators such as birds and marine mammals.

We’ve previously highlighted the importance of these connections, and how a high quality marine environment can support great biodiversity. At the Point of Ayre, these biodiversity food chains link the sea and the land, best illustrated via the local seabird populations.

The shingle beach at the Point of Ayre has a long history of breeding Arctic terns. These ‘swallows of the sea’ fly from their wintering grounds in the southern hemisphere to nest at the Point. Arctic terns can be long-lived; the oldest known ringed Arctic tern in the British Isles was 31.

Colour ringing has shown that many return to the exact same position on the beach year after year to attempt to raise a family, but the odds can be stacked against them with predators such as gulls, crows, rats and polecat-ferrets taking eggs and chicks. The weather can also heavily influence chick survival. 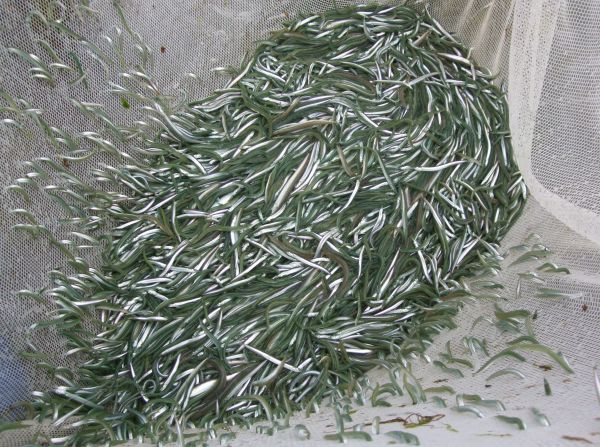 The Point of Ayre is well known for the breeding tern colony, but probably less known is the large flock of eider duck that gather on the sea just off the Point. These seabirds are truly charismatic due to the frequent cooing call they make to each other; the males are a dashing black and white with a green flush to their forehead and neck, while the contrasting females are a uniform brown. 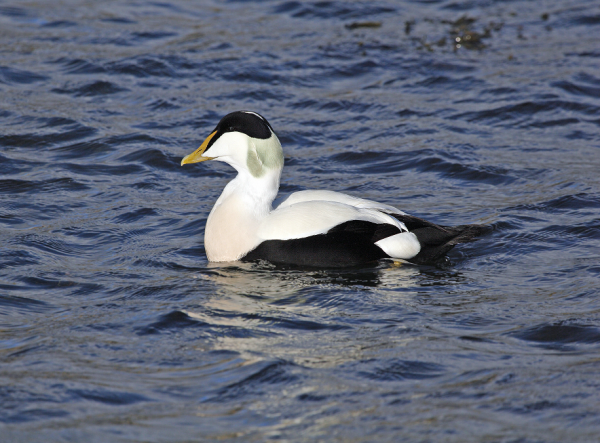 This gathering at the Point starts from June onwards, initially with the just the males while the females incubate their eggs and rear ducklings in hidden away locations around the coast of the Isle of Man. Once the ducklings are independent the flock of eider at the Point of Ayre can grow to three hundred birds or more. They feed on shellfish, particularly mussels, and so their presence at the Point suggests a good source of shellfish. This is a species that is doing particularly well in Manx waters as the population has greatly increased over the last 50 years.

Other marine avian specialities off the Point are the Divers, with the red-throated diver being most abundant and occasional sightings of great northern diver and black-throated diver. 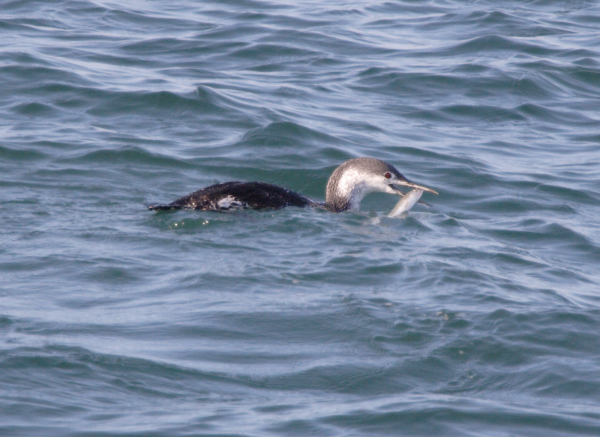 Red-throated divers are listed as rare or vulnerable on Annex 1 of the EC Birds Directive. They breed at freshwater wetlands in north Eurasia and North America and spend most of the winter foraging in shallow coastal waters on fish that occur in the upper water column. An aerial survey would determine whether the Manx wintering population meets the SPA criteria of 1% of the GB wintering population (170 individuals)[1], either way from a Manx context it must be one of the best and most reliable places to see red-throated diver.

In July and August, there is frequently a constant stream of Manx Shearwater flying past; these birds are extraordinary in so many ways; they are our oldest known British birds with individuals recorded at 50 years; many travel long distances to feed during the breeding season returning to their nesting burrows under the cover of darkness; they over-winter in the southern hemisphere flying south down the west coast of Africa and then flying north along the east coast of Argentina, Brazil and America. They feed on small fish and crustaceans. 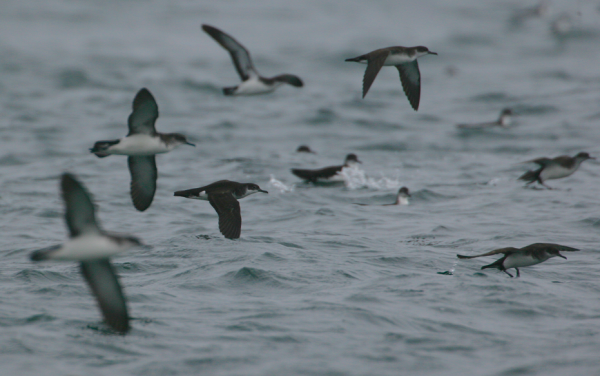 Small groups of razorbill and guillemots also gather off-shore once their chicks have fledged. Their echoey contact calls travel long distances over the water and can be heard from the shore. They are also taking advantage of feeding on small fish, but rather than feeding from the surface they can dive up to 30m to find food.

Shags and cormorants both nest on the cliffs around the Isle of Man, there is also a small cormorant breeding colony on an island at Manx Bird Life’s recently acquired reserve at the Point of Ayre. 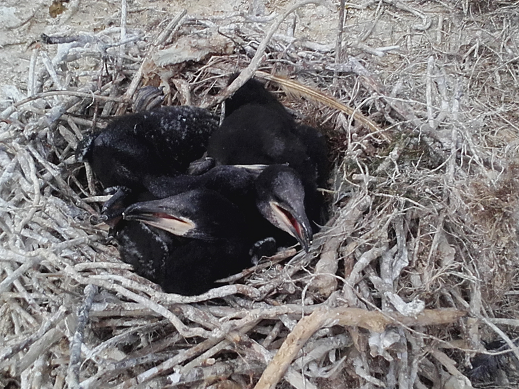 Both species feed off-shore by diving from the surface, sometimes taking very large fish.  Dead shags frequently wash up on the beach at the Point of Ayre following prolonged storms and it’s presumed they are unable to feed during these times and weak birds succumb to the harsh environment.

Gannets are another star species at the Point of Ayre. This is one of the few locations where they come really close in to the shore and great views can be had. They perform spectacular aerial dives and can enter the water at 55mph. Feeding frenzies of diving gannets occur when large shoals of fish are in the area. Satellite tracking has shown that the gannets we see in Manx waters over the summer are from Ailsa Craig Special Area of Conservation gannetry located 118km to the north[2]. 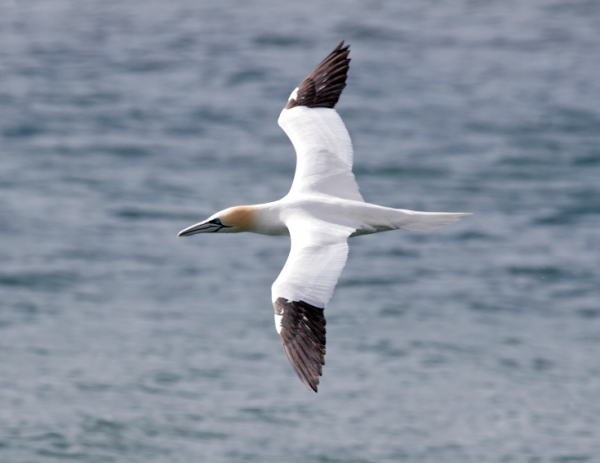 So, the Point of Ayre really is a special place for seabirds and, with the new Point of Ayre National Reserve being developed around the old sand and gravel quarries by Manx BirdLife and Island Aggregates, visitors should be able to enjoy a truly special bird experience when it opens to the public in April 2022. Even though the reserve is not yet completed, already 179 species of bird have been recorded here, and that’s 54% of all species recorded for the island. 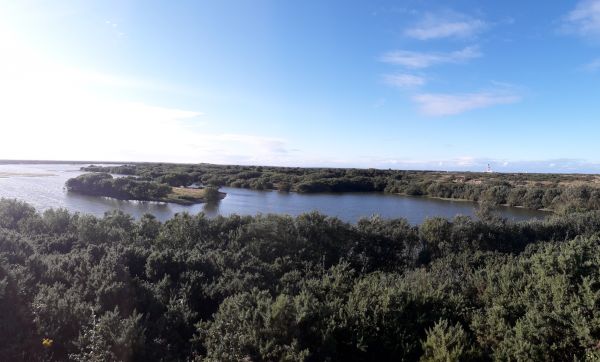 Point of Ayre National Reserve, with PoA lighthouse in the background

Next week, we’ll continue our westward journey through the largest of our Manx MNRs.

To find out more about the Isle of Man's MNRs, click here.