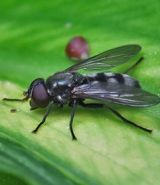 Year of the Fly

As 2019 is Year of the Fly, I've been asked to profile a few of the flies that can be seen on the Isle of Man.

Fly really refers to the two-winged flies (Diptera) rather than those 'flies' with four wings such as Dragonflies, Caddis Flies and Sawflies.

Although they don’t get the same credit as bees, flies are great pollinators. At their larval stages, they are predators of pests such as greenfly and they are also hugely important recyclers of dung, dead plant material and carrion. Without them the countryside and beaches would be covered in this material.

For a nice appreciation of the Year of the Fly, read this blog piece by Erica McAlister of the Natural History Museum, London.

Not all the flies featured have been found on the Island but their close relatives have. Erica also wrote “The Secret Life of Flies”, an amusing non-technical but informative introduction to the world of flies. It's well worth getting a copy.

If you wish to learn more about flies, joining the Dipterists Forum, a society for the study of flies, is an excellent way to learn more, too.

Emerging in late April/early May in the Isle of Man are:

These brilliantly metallic flies have just started to appear. They are frequently seen sitting on sunlit tree trunks and foliage, from which they can investigate passing insects looking for potential mates. The fly’s larvae are parasites on the caterpillars of various moth species. There are several other 'green bottles' about at present but this species is usually a brighter green with a white face and they are exceptionally bristly. As the fly ages, the green fades and becomes brassier.

As the Ramsons, or wild garlic, comes into flower, so this medium-sized hoverfly emerges and the males in particular can be found sitting on the Ramsons leaves or on nearby plants. The males have large, grey dust-spots on the top of the abdomen. The females have less obvious dusting and are not seen as often as they spend time below the leaves egg laying. The fly’s larvae develop in the Ramsons stem bases and bulbs to emerge each May as the flowers appear. The adults can be quite sluggish, so offer a good photographic opportunity if you find them. Oddly, not all stands of the food plant have the fly present for reasons that aren’t understood. I have found the fly at various places around the island including Ballaugh Plantation, Bishopscourt Glen, Port Grenaugh and the graveyard at Old Braddan Church. If you come across this fly please try to get a photo and either let me know or post the record into iRecord.

These large, black flies will be on the wing any day now. A few of their smaller brethren have been out for about a month or so but this large species appears in late April, often in large numbers. Despite being large (wing length up to 13mm) and entirely black, the males and females look different. The males have heads that are largely made up of eye, a useful feature when your sole purpose is to find females to mate with, whereas the females are longer faced with small eyes. When in flight, this species often dangles its hind legs below the body giving them a distinctive profile. The larvae live in the soil where they feed on dead vegetation and living roots, sometimes causing damage to crops.

Thanks to Ian Andrews for the photos.