More than half a million scallops have been moved to make way for an underwater cable in a project embracing all three central principles of a UNESCO Biosphere: conservation, learning and sustainable development.

More than half a million queen scallops have been moved from the route of an underwater cable following a unique collaboration, in a project that involves all three central principles of a UNESCO Biosphere: consversation, learning and sustainable development.

The Isle of Man Government worked with scientists and fishermen to locate, catch and re-home 19 tonnes of scallops ahead of work to link the Island with the Havhingsten Telecommunication Cable.

Dublin-based Celtix Connect, on behalf of Aqua Comms, has been authorised to land two branches of the marine fibre optic cable at Port Erin and Port Grenaugh in the coming months.

The branches will see 75km of marine cable installed in the Manx seabed, and connect the Island to data centres in Ireland, the UK and Denmark, offering improved internet connection with faster speeds.

The installation has been subject to Government approval processes under the Submarine Cables Act 2003, and a public consultation that resulted in some applied conditions, including a survey to assess scallop stocks and sensitive marine habitats. 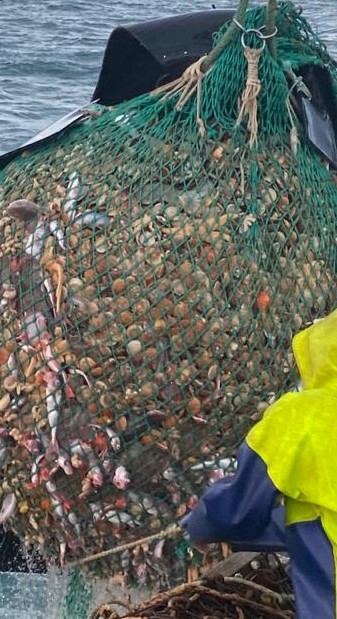 This was carried out in August and identified high-density beds of queen scallops along the Port Erin route in an area that had not been fished for many years.

The route passes through the Chickens fishing ground and includes an area that has been closed to protect juvenile queenies at the request of the Scallop Management Board.

Although the cable is less than 50 mm (2 inches) in diameter, a wider area is required for its installation, so it was decided to relocate the scallops to safer grounds.

The Isle of Man Government and the Manx Fish Producers’ Organisation (MFPO) negotiated with Alcatel Submarine Networks (ASN) to catch and relocate the scallops along a 7.5km stretch, with the operation being successfully carried out last month.

During the operation the Manx fishing boat FV Coral Strand caught and relocated around 555,000 shell fish.

Geoffrey Boot MHK, Minister for Environment, Food and Agriculture, said: ‘This had been a unique and highly successful collaboration. It was not feasible to significantly move the route of the cable so we had to think of an innovative solution that has seen local fishermen work with Government.

‘The process has provided useful scientific data for fisheries management and the fishermen’s efforts have saved more than half a million scallops for future harvest of the Manx national dish.’

Work to prepare the seabed has now started and the cable is expected to be laid in the coming months.