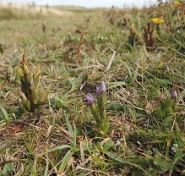 Threatened plant thrives at the Ayres

A recent survey at the Ayres NNR has revealed an increase in a nationally threatened flower species.

The Field Gentian is an attractive, short flower with light mauve flowers and can be found flowering in the autumn.

A full survey has revealed that 6,900 plants have emerged this year, an increase of 47% since the last full survey in 2016.

Field Gentian grows mainly in the north of the UK, is listed as ‘vulnerable’ there, and has declined significantly in the last 30 years. So we are very pleased we seem to be bucking the trend here.

We have managed to create these habitats through limited cattle grazing on fields during the winter.

Inadvertently, the thousands of annual visitors walking the paths on the Ayres have also created ideal conditions.

We are continuing our surveys through the autumn as the flowers can still be found in November, so the numbers will continue to grow.