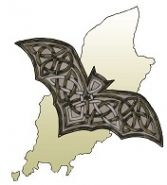 Kevin Wells, Chairman, explains the work of the Manx Bat Group and calls on people to get involved in a new citizen science project that will aid understanding of the important mammal:

The Manx Bat Group was formed in 1990 to promote public awareness by public bat walks, and educational talks to schools and local groups. We provide a helpline (07624 366177) for people to call if they find an injured or grounded bat.

We also have a website as well as Facebook page where people can find out more about bats and there are links on both for people to contact us if they want advice. Another service we provide is surveys for planning etc.

The group was formed just after the current Wildlife Act came into force. It provided protection, for the first time, not only to bats but their roosts as well.

We often get asked: 'Why do bats need protection and why protect the roost?' The answer is that humans have, over the last century, been slowly destroying the natural habitats to the point where bats were going into serious decline.

Bats are often confused with rodents but are nothing like them. They give birth only once a year, around about this time. Generally, they only have one pup a year, and then not every year.

Roosts are protected because bats have summer sites, which include maternity roost, and winter hibernaculum roosts.

Most bats tend to return year on year to the same roost. Destroy the roost and it can have a devastating effect on the population.

Bats provide three useful functions to humans. There are insectivorous bats (all Isle of Man species are this type), which can eat thousands of insects per night, and so help prevent the need for pesticides and the spread of insect-borne diseases around the world. They are also the main pollinators of some plants and main seed distributers as well.

Although worldwide there are 1,380 recognised species of bat, the Isle of Man has seven known species, (and possibly, following a sound recording last year, an eighth species). This compares to 18 species in the UK, 10 in Scotland, and eight in Ireland, so we are doing quite well.

One question we are getting asked more and more, is: 'How are Manx bats doing?' Unfortunately, it is a question that is very difficult for us to answer. In the 19 years we have been in existence we have collected over 2,000 records, but we are only a small group of enthusiastic volunteers and, despite our best efforts, we just don’t have the manpower or resources to monitor all bats on the Island.

We therefore hope our newly announced citizen science project will help increase our knowledge going forward. Thanks to the help of a grant from the Manx Lottery Trust we have been able to purchase eight of the latest Anabat Scout bat detectors.

These are very simple to use and not only allow the user to hear bats, they also record the calls along with a GPS location at the same time.

The Bat Search 2019 project asks for members of the public to volunteer to walk a known transect of their choice, about 1km in length, a minimum of three times over the summer: in June, August and September, starting just after sunset.

They will be loaned one of the new detectors to take on this walk and then return it to us afterwards.

The Manx Bat Group will then analyse the recordings to see how many of each species have been detected and where they were, using the inbuilt GPS.

It is planned to repeat the same data collection year on year.

As we will have mapped records, this can still be repeated by someone else, even if the original volunteer doesn’t wish to continue. With this data we will be able to tell if bats numbers are increasing, decreasing or staying constant.