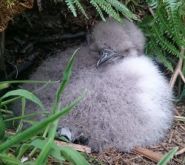 Sixty years of birding at the Calf of Man observatory

Living on our wonderful Island, it is all too easy to take for granted the quality of the environment that we are fortunate to enjoy.

One of the jewels in our biosphere “crown” is the Calf of Man and, as we enter the 60th year of the operation of the bird observatory, it is an opportune moment to reflect on the history of the observatory and its contribution to ornithology, not only in the context of the Isle of Man but also further afield.

How did the Calf of Man become a bird observatory?

A young Norwegian ornithologist called Einar Brun, accompanied by his wife Dido, were appointed by the Manx Museum and National Trust as the Calf wardens in 1959. The British Trust for Ornithology (BTO) had asked Einar to explore the potential of the Calf as a bird observatory and so formal bird recording started on the Calf during his tenure. By 1962, the Calf had become one of Britain and Ireland’s accredited bird observatories.

What was life like for the wardens on the Calf in the early days of the observatory?

This British Pathe newsreel from 1959 brilliantly captures Einar and Dido Brun going about their work.

What kind of bird recording is undertaken on the Calf?

A number of different types of recording are carried out by the wardens, ranging from bird ringing - where birds are primarily caught in mist nets and Heligoland traps before ringing and release - to bird breeding surveys and general observations of birds in and around the Calf.

What is bird ringing?

A small, metal, numbered ring is attached to the bird’s leg. If the bird is subsequently recovered, the details of the ring are passed to the BTO. This allows the details of the recovery to be passed on to the original ringing location which in turn, provides valuable information about migration routes.

Why is bird ringing an important conservation tool?

Catching and ringing birds allows a greater understanding of bird ecology, ranging from migration routes, species longevity, changes in population to biometric data. This data, along with that drawn from other ringing locations, combines to provide a powerful data set that allows research to be undertaken on the impact of external factors such as environmental change or conservation measures on bird populations.

How many birds have been ringed on the Calf?

Where have these birds gone to or come from?

What contribution has the Calf Observatory made to the Isle of Man and wider ornithological recording?

Over the past 60 years, with the benefit of dedicated ornithological effort, the Calf has contributed no fewer than 57 'firsts' for bird species recorded on the Isle of Man. In terms of first British records, the Calf recorded the first White-throated Robin in 1983, while a Mourning Dove in October 1989 was the first record for the Western Palearctic.

What are Manx National Heritage’s priorities for the Calf Observatory going forward?

Over the last decade on the Calf, following the complete loss of the breeding population due to “longtail” Brown Rat predation, we have seen a welcome resurgence in the breeding population of Manx Shearwater. This success is almost certainly attributable to the Manx Shearwater Recovery Project. Starting in 2012, this project aimed to eradicate the rat population and the challenge is to continue to monitor the Manx Shearwater population, while managing any signs of rat incursion. In an associated project, Manx Wildlife Trust has deployed Puffin decoys and it is hoped that Puffin will be encouraged to return to the Calf where they last bred in the 1970s.

The Calf is also internationally important for breeding Red-billed Choughs, having the greatest density of breeding pairs anywhere in the British Isles and through appropriate management, we want to ensure that this important population flourishes.