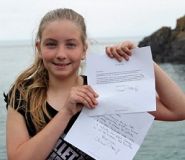 Sir David Attenborough has sent a message to the children of the Isle of Man, telling them their efforts to reduce plastic use will make a big difference to the planet.

Breesha Jenkins, who heads Arbory Primary School’s Eco Council, read out the message from the TV presenter and natural historian at UNESCO Biosphere Isle of Man’s Voices for Our Future event.

Inspired by a visit by Jo Ruxton, producer of the film 'A Plastic Ocean', Arbory School is working to educate others about the need to cut plastic use.

Ahead of the event, Sir David wrote to Breesha:

‘I am delighted to know that you and your school are helping to fight the plastic and litter problem in our oceans. My message to the children of the Isle of Man is:

Tackling the problem of plastic waste is going to require the help of everyone. Right now, 8 million tonnes of plastic end up in our oceans every year. If we all start making small changes that are achievable, together we can really make a difference. I urge you all to join in and think about how you can reduce the use of plastics in your lives.’

Voices for Our Future, held on Sunday 12th May, provided an uplifting end to a successful Manx Wildlife Week 2019, organised by Manx National Heritage and partners.

Guest speaker at the event was naturalist Dara McAnulty, 15, from Northern Ireland who has won TV and national newspaper awards, has appeared on Radio 4, is an ambassador for social action campaign iWill, commands a large social media following and publishes his first book next year.

Dara spoke of the importance of parents allowing their children to explore outdoors and said it was important young people spoke up and ‘roared for wildlife’.

Laxey Primary School, shortlisted in next month’s TES Schools Awards for its work on sustainability, gave a presentation about how it is influencing a ‘conscious community’.

Lula Brown showed her charity GushGush’s work bringing clean water to areas that lack it. Charlotte Crichton spoke about the need to reduce plastic use. Isabella Losh shared stories about caring for nature. There was music on a nature theme from Manx music group Bree and a poem by Junior Manx Bard HollyMcRae.