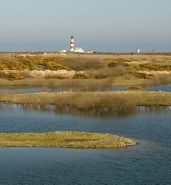 Extractive industries (mining and quarrying) are not ones that most would consider to be friends of the environment. Nevertheless, a built environment requires a supply of aggregates on which to base its construction and maintenance.

Concrete is a near essential material in almost all buildings and civil engineering constructions. The Island is fortunate that sand and gravel which are essential constituent ingredients when making concrete are found in abundance. The most significant sand and gravel deposits are found in the north of the Island. This landscape resulted from the depositing of debris as the ice sheet retreated at the end of the Ice Age around 14,500 years ago.

The Ayres and other beaches in the north of the Isle of Man have been a source of boulders, stones, sand and gravel for millennia. This is evidenced by finds of stone implements and more recently, shore stones were used as building materials.

Today, sand and gravel workings continue at the Point of Ayre. Island Aggregates Limited is the current sandpit operator there, and has been since the 1950s. Sand and gravel is excavated on an industrial scale to provide for much of the Island’s concrete production needs and also for other applications.

Such excavation involves the removal of the surface habitat which may be home to a variety of life forms and then creates open pits after the targeted sand and gravel have been removed. This disruption to the environment is necessary though, if required natural resources are to be sourced indigenously.

With quarrying taking place both above and below the natural water table, freshwater lagoons are formed as the extraction progresses. Island Aggregates Limited has managed the restoration of these former extractive areas by careful landscaping and stabilisation of previous working face edges.

The resulting “man-made” environment is regarded one of the most important sites for breeding birds on the Island and, in Manx terms, the shallow lagoon with islands, some vegetated, some shingle, is unique. As such, it is has been a designated Area of Special Protection for Birds since 2001.

The Point of Ayre is an important breeding ground for a variety of gulls (Common Gull) and ducks (Gadwall), as well as Cormorant, Curlew, Oystercatcher and Ringed Plover. For some species, the Ayres is the only Manx breeding site, which underlines its importance and significance.

It is also a wintering site for some migratory birds, particularly Pochards and passing migrants during spring and autumn, including a verity of waders, Swallows and Swifts. A number of rarities such as the Black-winged Stilt and Great White Egret have been sighted.

The environment at the Point of Ayre is one that has been altered by man during exploitation of natural resources, but by careful and thoughtful rehabilitation by Island Aggregates Limited has been returned to nature to provide a possibly more valuable and biodiverse habitat than existed before.

The rehabilitated sandpits at the Point of Ayres site are private property and not open to the public.

However, Island Aggregates Limited has recently reached a formal agreement with Manx Birdlife covering the large, worked-out pit at the northern end of the site.

In the coming months and years, MBL will develop the site as a bird reserve, allowing controlled access to the site for birdwatchers and researchers.