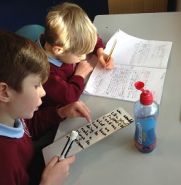 Laxey Primary School pupils make a difference to their environment

At Laxey School, the teachers decided to ask the children what future issues concerned then. Overwhelmingly, the students spoke about the single use plastic issue and keeping their village, land and sea clean and cared for.

Dawn Dickens, from Manx Wildlife Trust, was invited in to speak to the children and the children then discussed ways that they could make a difference through positive social actions.

To start the process of change, the Year 6 students realised that positive messages were going to be essential, so they developed hashtags to bring the school together with its supportive community. (#LaxeySchoolCares and #LookAfterLaxey).

The students’ first action was to promote and lead a beach clean with Beach Buddies for the entire school. Via posters and social media, they invited members of the public to join in.

They also took action by commissioning an outdoor mural with local artists, Jannoo; carrying out litter picks; composting their lunchtime leftovers and developing a network of local businesses in Laxey village to offer refilling stations for drinking water.

Currently, the students are waiting for responses from their letters to commercial businesses and government highlighting where there is unnecessary plastic use. One response from the Laxey Football Club and Garff Commissioners led to the children developing posters and stickers to promote responsible disposal of rubbish and dog fouling.

Another response was from the Chief Minister, who acknowledged that the idea to change the contracts for the procurement process to say ‘no single use plastic packaging’ rather than ‘recyclable plastic’ was a good idea.

After a whole-school vote, our next goal is to carry out a Laxey village and glen clean. We are also developing links with The Laxey Glen to establish history trails.

In late April, Laxey and Dhoon Schools will host our second 'Bright Futures' conference. We have invited Year 6 representatives from the northern primary schools. This is an exciting opportunity to build community links between schools and agencies like Beach Buddies, The Wildlife Trust and UNESCO Biosphere Isle of Man.

Upon reflection, the outcome for the students has been huge. Their passion and enthusiasm is boundless. They can see problems that adults often overlook and they have fabulous, creative solutions to issues. The children have learnt that if they have a well thought through plan and explain it well, they have a strong voice.