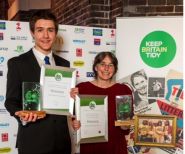 The highlight of the Jubilee celebrations, the prestigious overall award, celebrates outstanding individuals, groups or organisations in pursuit of Keep Britain Tidy's vision for the next 60 years, from across all areas of environmental improvement.

The secondary school's Eco-Committee has shown what can be achieved when a group of passionate, committed students come together with a common cause to lead and implement environmental projects.

The Eco-Committee has raised money to improve the school, helped in the local community, raised awareness of environmental issues and inspired others. The pupils developed the ideas and managed many of the projects themselves, without staff help. When funding was needed for the projects, the students fundraised, sought sponsorship and borrowed equipment to turn their ideas into reality.

Queen Elizabeth II High School was one of 11 winners whose achievements were recognised at the ceremony, in the presence of Environment Minister Dan Rogerson MP and Keep Britain Tidy's Ambassador, TV presenter Kirstie Allsopp. The awards celebrated the exceptional contributions that Keep Britain Tidy's partners and supporters have made to the local and global environment.

"It is a fantastic achievement that the school's eco-committee has undertaken so many projects that they have developed themselves, while helping to make the whole school community more aware of environmental issues. Well done to all those involved."

Environment Minister Dan Rogerson MP said: "Getting everyone involved in improving the environment and taking pride in their local area is vital if we're going to stop people littering.

"The kind of innovation and creativity shown by the nominees and winners of these awards plays a huge role in inspiring this action and I congratulate them on their efforts to keep our neighbourhoods clean and tidy. I hope their success inspires more initiatives across the country to help manage waste and keep England litter-free."