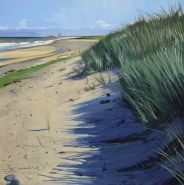 Accomplished artist Graham Rider, of Douglas, is inspired by the Isle of Man's beaches. His work forms part of an exhibition opening next month. He talks about why he took up painting and how to follow in his footsteps.

What inspired you to begin painting?

My first real job, after sixth form, was in the centre of London in the Civil Service. The office was a lunchtimes walk from the National Gallery and a short tube ride from the Tate Gallery, I had never been in an art museum or gallery before this and it was a revelation, I saw ‘Mr and Mrs Clark and Percy’ by David Hockney and I was hooked. I didn’t realise painting was a career you could choose but pretty soon I was at art school.

How would you describe your work?

The paintings I do now are mainly of the beach or landscape in what might be called a British Impressionist style. I used to paint more detailed pictures of cities, with strong perspective but I have found, more and more, I want to capture the ‘feel’ of what it’s like to be in the open air so, where I would have used small, sable brushes, I use hogs' hair brushes, try to create texture and use more colour, with uncomplicated compositions.

I have been quite humbled by some of the things that people have said about my paintings when they have seen them at Noble's Hospital, where they are on display, I have realised people can have quite complex feelings about an image and it reminds me what I felt when I first saw paintings in galleries. Painting is not about producing just a visual record of what is there. It can be much more: a mediation of image through experience with a spiritual ambition.

What particularly inspires you about the Isle of Man’s beaches?

The first thing that hits you is how few people are on them and how unspoilt they are. I spent some time on the beaches in the north west of the Island last year and was bowled over by the light, sound and wildlife.

I was recommended the poems of Mona Douglas and have since had them in mind while painting particular pictures, my works ‘Gulls’ and ‘On Andreas Sands’ especially. I am trying to get a copy of her book ‘Island Magic’ as I have only read a few poems from that book so far.

The sight of the Mountains in the distance from various points on the Island is also a continuing source of inspiration.

What advice would you offer to someone setting out to paint the beauty of the Isle of Man?

Firstly, paint and draw directly from what you see. I have small ‘pochade’ boxes similar to those painters have used down the centuries. They allow you to paint several small studies on boards directly from nature without a lot of trouble. You can get to the site and start.

Secondly just because something is beautiful doesn’t mean it will make a good painting. Sometimes a beautiful landscape should be admired as just that. Thirdly, even a photograph, however good, cannot just be copied. I use my own photographs for information but they are definitely not art. Photography is an art form of its own and again should be admired for that reason.

Also, and this is a matter of choice, other art forms can feed what you do, broaden and deepen your responses to the landscape.

Where is your favourite place to paint in the Isle of Man and why?

I would say Rue Point, although the sand dunes just south of the Point of Ayre are pretty good, too. I tend to merge elements from different sites and variety is what I look for as well as the grasses and shadows.

Where can people see your work?

I have some work in the Isle Gallery at St John's, Studio 42, Port St Mary, UK galleries and at Noble's Hospital, where a surprising number of people have seen them. I have an exhibition of new work coming up at the Hodgson Loom Gallery in October which I am really looking forward to