It is good for us to connect with nature while in lockdown again. In a new #CloserToNature blog, Dr Richard Selman, Ecosystem Policy Manager at DEFA and Chairman of the Manx Ornithological Society, writes of the restorative effect of his daily permitted stroll through the countryside close to his home:

Dr Richard Selman, Ecosystem Policy Manager at DEFA and Chairman of the Manx Ornithological Society, writes of the restorative effect of his daily permitted stroll through the countryside close to his home:

So we are in lockdown once again and, though the weather is cold, this is due to the beautiful clear skies.

A regular walk, for exercise (masked and socially distanced) is lovely, if wrapped up warm in long underwear, hat, gloves and scarf.

In the spring we had lovely warm, sunny weather and it was heartening to get outdoors, between working periods at home, but here we are in the heart of winter.

However, on my first short jaunt at lunchtime, I found much of interest, binoculars ever at hand. I am lucky, in that I live in the countryside and make the most of the views and natural interest.

Heading out there was a crunchy crispness underfoot, as I headed for the nearby woodland. There, blackbirds (lhonyn dhoo) tossed leaves around in a search for morsels, such as worms and other invertebrates, and red-breasted robins (spittagyn jiargey) darted into cover. The waterfall was gushing white and despite the skeletal look to the trees, gullies were blanketed in a velvety green baize of feathery mosses.

Down the valley, I reached the shore, where a gull caught my eye. It wasn’t the usual heavy herring gull (foillan) or the even larger great black-back (Juan mooar), but a smaller, more elegant, round-headed gull with dark eyes and a perky look to it. It was a common gull (foillan vane), a bit of a misnomer in English for this area as very few breed on the Isle of Man, just a sprinkle at the Point of Ayre in summer, but it has a wide distribution across Europe, central Asia and north-western America, and more are seen here in the winter than in summer. 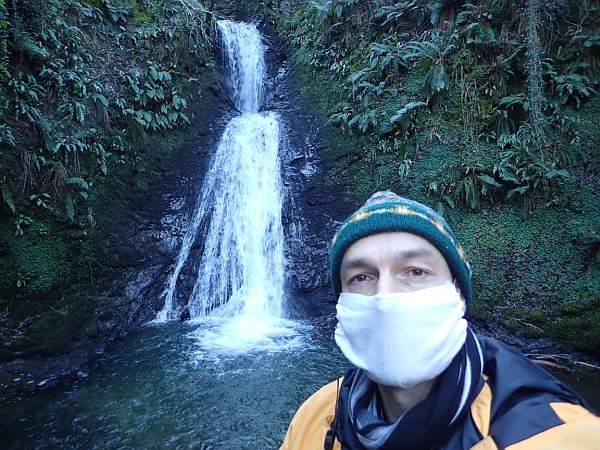 I saw another gull fly past and soon focused on four common gulls on the shore, on the sandbanks and foraging in the shallows. There was also the usual band of noisy oystercatchers (bridgeenyn, or gareeyn breckey here in the north), with their pied plumage and bright orange beaks and legs, poking their long, straight beaks into the sand, seeking worms.

Oystercatchers, if you could see them close enough, have bills that betray their primary feeding technique. They may be pointed, blunt or chisel-shaped. This is because they employ a variety of techniques for foraging and handling prey, which they learn from their parents. 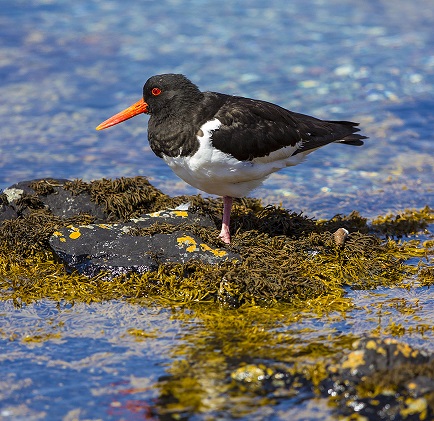 These were poking in the sand for worms or bivalves and gleaning from the seaweed-covered rocks. When dealing with bivalve molluscs such as cockles or mussels, they may become stabbers or hammerers and the continual growth of their bill sheath adapts to the prevailing wear and tear, providing a tool of a particular shape.

Nearby, also on the sandbank, intermittently darting as it searched for food to glean from the sand, was a lone ringed plover (feddag ainnit), a lovely bird with a black mask and a black band like a necklace.

This one has decided to stay in this area for the winter, or a part of it, whilst others may move further south, as far as southern Africa, though it is more northerly breeders that tend to fly farthest south for the winter, whilst Manx birds may remain resident or migrate a short distance.

No common crows were in evidence but there were other corvids: four choughs (caaigyn) wheeled overhead making their characteristic ”chow” cry and showing coral-red bills and legs and ‘fingered’ wing-tips, and a huge raven (feeagh) landed on the pebbles, giving fairly close views of its ragged trousers and face muff, a quick poke around, and then off it flew.

And so I returned to my desk at home for the afternoon, having taken the air, soaked up some warming rays, giving my legs a stretch (and a few arm stretches), enjoyed some lovely coastal views and emersed myself in the reviving Biosphere, feeling refreshed and ready to set-to once again.

Always follow all Covid-19 advice issued by the Isle of Man Government.