The importance of the bee

It's UN World Bee Day on Friday 20th May 2022. The Isle of Man Beekeepers' Association, a Biosphere Partner, tells us about the importance of the insect for our food supplies, and our very existence.

It's UN World Bee Day on Friday 20th May 2022. The Isle of Man Beekeepers' Association, a Biosphere Partner, tells us about the importance of the bee for our food supplies, and our very existence:

Why are bees important?

With 35% of the leading global crop production and 80% of all European wildflowers relying on pollinators as a key part of their life cycle, it is concerning to realise that pollinators worldwide are in decline. The plight of our pollinators is of mounting public and political concern, their decline reported to be caused by a combination of stresses from loss of habitat and food sources to exposure to pesticides and the effects of climate change. Although the promotion of how bees are vital to nature and to our lives is important, it is widely recognised that this now needs to turn into action to ensure that all pollinators have the requirements they need to thrive.

Pollinators are critical to our access to stable, healthy food supplies providing the varied, colourful and nutritious diets including fruits (including vegetables such as squash, cucumber, tomato and eggplant), nuts, seeds and in the production of fibre (such as cotton), and hay (alfalfa grown to feed livestock). In the UK, it has been estimated that all pollinators contribute over £600 million annually to the agricultural economy (at farm gate prices). This probably represents in excess of £1.5 billion, once the food reaches supermarkets. It is suggested that honey bees contribute up to 50% of this pollination value.

By far, the main insect pollinators are bees, who are well adapted to pollinate flowers. In fact they have been described to be responsible for one out of every three bites of food we eat. With over 20,000 known species of bee globally, there are approximately 270 species of bee recorded in the UK, including 25 bumblebee species and more than 220 types of solitary bee. The Isle of Man has 76 species.

Only one of these species are the famous Honeybee. The European Honeybee (Apis mellifera) is a prominent honeybee species found in the UK and Isle of Man. Its importance to humanity was recognised after becoming the third insect whose genome was mapped. Worldwide, there are 8 honey bee species recognised, all classified within the Genus Apis.

Why are bees good pollinators?

Pollination is the transfer of pollen from the male parts of a flower to the female parts of a flower of the same species, which results in fertilisation of plant ovaries and the production of seeds. A variety of wildlife including flies, wasps, moths, beetles and even some birds, bats and lizards all pollinate, but they only visit flowers enough to feed themselves. Because they gather pollen to stock their nests, bees are generally the most effective pollinators since they visit many more flowers and carry more pollen between them. Bees tend to focus on one kind of flower at a time, making it more likely for ‘cross pollination’ to be successful. Pollen is a source of protein that bees feed to their developing offspring (larvae). When a bee lands on a flower, the hairs all over the bee's body attract pollen grains through electrostatic forces. Many flowers reward bees with nectar, a mixture of water and sugars which is processed by honeybees into the sweetly famous condiment we know as honey.

Where and how do bees live?

Solitary bees include Mining bees (which nest in the ground), as well as Mason bees and Leafcutter bees (that nest in holes in dead wood, banks and walls). Solitary bees tend to nest on their own, as the name suggests. Each female builds and provisions her own nest with food.

Bumblebees live in social colonies, usually in holes in the ground or tree cavities. Each colony has a queen who lays many eggs for the colony to feed and care for until they grow into adults.

Honey bees are social insects with complex divisions of labour within the hive. They make combs of pure wax, formed by a series of hexagonally shaped cells designed to store reserves (like honey and pollen) and to grow larvae within. Honeybees are mostly kept by beekeepers in colonies of managed hives.

Why bees need flowers throughout the growing season?

Bees that produce multiple generations each year need food resources (pollen and nectar) across most of the growing season in order to produce strong colonies. Providing plants in a landscape with overlapping bloom periods will help these bees survive and prosper. Beekeepers have even named a notorious period during the year ‘the June Gap’ as this is well known to be a time where flowering plants are distinctly missing, causing hives to starve to the point where they can be completely lost.

The different characteristics of bees make them suited to pollinate certain plants. For example, the smaller Early bumblebee allow it to enter plants with drooping flowers such as comfrey. Garden bumblebees are better at pollinating the deep flowers of honeysuckle and foxgloves than most other species because their longer tongue can reach deep inside them.

Bee diversity help farmers to pollinate their produce. For example, commercial apple growers benefit from the free pollination services of the Red mason bee. This species can be 120 times more efficient at pollinating apple blossoms than honeybees.

Natural pollination by the right type of bee can improve the quality of a crop. An example includes how bumblebees and solitary bees feed from different parts of strawberry flowers and in combination, the plants produce bigger, juicier and more evenly-shaped strawberries. 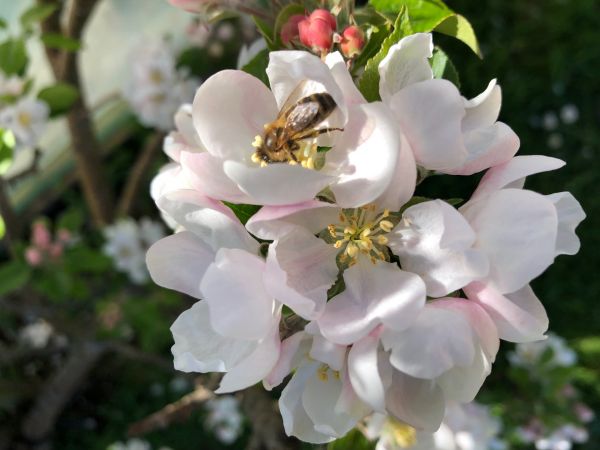 Some bee species have an affinity to particular plants, so need particular natural habitats. For example, in the UK the scabious bee, our largest mining bee, needs the pollen of field scabious or small scabious to provision it’s young. These plants grow on sandy or chalky open grassland, an important habitat for a variety of bees and wildflowers that is under threat from changing land use. The loss of particular habitats like this is the main driver of bee decline.

Bees and the environment:

Maintaining our native flora also depends on healthy pollinator populations. This includes wild flowers such as poppies, cornflowers and bluebells, as well as trees and shrubs. The close relationship between pollinators and the plants they pollinate is evident in the parallel declines seen across the UK and Europe: 76% of plants preferred by bumblebees have declined in recent decades, with 71% seeing contractions in their geographical range.

Bee communities, both wild and managed, have been declining over the last half century as pesticide use in agricultural and urban areas increased. Changes in land use have resulted in a patchy distribution of food and nesting resources. There have been a number of reports in the media about the mysterious disappearance of large numbers of honey bees called colony collapse disorder. The Isle of Man has a disease free status that includes honeybee parasites and diseases thanks to strict border controls. No bees or contaminated bee products are allowed to enter the Island which has kept pests like Varroa mite (Varroa destructor) from harming our honeybee populations. Varroa is a known contributor to reducing hive health and the spread of bee diseases placing further pressure towards the honeybee decline. Beekeepers are forced to manage the mite using treatments that include formic and oxalic acid. The Island is also free of other internationally devastating bee pests and diseases including the small hive beetle, European and American Foul Brood.

Balanced on a tenuous timeline, the challenges ahead are varied and complex. Many growers are concerned about how they will continue to be able to pollinate their crops. We are in a unique position on the Isle of Man to place our activities more in balance with the natural world.

Our community can assist our pollinators by maintaining strict border controls to keep pests and diseases of pollinators from reaching the Island. Using sympathetic farming practices to pollinators could include devoting untouched wilderness areas, selective use of pesticides, best management practices to keep pests and disease in control while promoting beneficial insects. Recognition of our biodiversity in identifying and protecting nature reserves and other important land areas to provide habitat critical to our pollinators. Changing our own habits, we can enhance pollinator success. Intentionally keeping unmown ‘bee friendly’ zones where wild flowers (like dandelions) remain available to pollinators. Planting our gardens with a variety of species, in large quantities to provide resources throughout the growing season. Allowing hedgerows to flower and not trimming or removing them during the times pollinators need them most. Together, DEFA and our community can make a difference to make a brighter future for all our pollinators.