Special sightings during survey off east coast of Isle of Man

The Department of Environment, Food and Agriculture (DEFA) and Bangor University have conducted their annual survey of a protected area of sea off the Isle of Man’s east coast. Dr Peter Duncan, Senior Marine Environment Officer with DEFA, tells us about it – including a special sighting.

The Department of Environment, Food and Agriculture (DEFA) and Bangor University have conducted their annual survey of a protected area of sea off the Isle of Man’s east coast. Dr Peter Duncan, Senior Marine Environment Officer with DEFA, tells us about it – including a special sighting:

The Isle of Man has a network of 10 permanent Marine Nature Reserves, and which form the core marine areas of Biosphere. 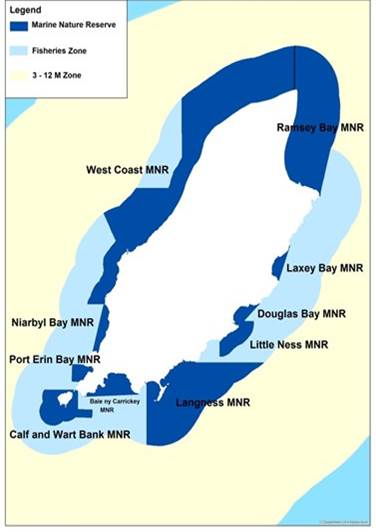 However, we also have a number of temporary Marine Protected Areas (MPAs) for fisheries management purposes and these are typically smaller and of short duration, usually one or two years, and are introduced either to protect juveniles scallops or to allow for fishery recovery.

In the first case, when an area of high juvenile settlement is identified during the annual scallop surveys or by fishermen, then it is often closed to protect them until they are large enough for harvesting. Similarly, on occasion when an area has been heavily fished, a short–term MPAs can also be introduced to enable population recovery.

These temporary closures are always introduced collaboratively between the fishing industry (via the Isle of Man Scallop Management Board), DEFA and Bangor University, the Island’s fisheries science advisors.

One example of a recovery closure is the inshore fishing ground between Maughold Head and Laxey – known as East Douglas Experimental Research Area (EDG-ERA). It was primarily a queen scallop ground, but also contained king scallops, and was voluntarily closed in 2017 by the fishing industry in response to low catches. The closure provided a scientific opportunity to monitor the recovery of both scallops and biodiversity, which is useful data to help understand such processes if we need to apply the same strategy elsewhere.

The EDG-ERA extends from inshore out to the three nautical mile limit and, for scientific purposes, was divided into four areas, with multiple tow transects within each block.

Since 2017, Bangor University and DEFA has surveyed the area using the (Fisheries Protection Vessel) FPV. Barrule, and there is now four years of data to work with (2020 was missed due to the Covid-19 pandemic). These data should provide sufficient information for a collaborative decision to be made about the future of the area, and how it might return to fishing, without losing some of the potential benefits gained during the recovery period. A similar kind of approach was taken in Ramsey Bay, which is now an excellent example of how to run a sustainable scallop-dredge fishery in a marine protected area.

The main purpose of the 2021 survey, which is always done in early winter for comparative purposes, was to determine the numbers and distributions of scallops and queenies within the EDG-ERA.

This is conducted using two types of gear; a dredge (foreground in the below image) for larger animals, and a beam trawl (background), for smaller scallops – which provides an indicator of recruitment, ie. the new animals coming into the fishery population. 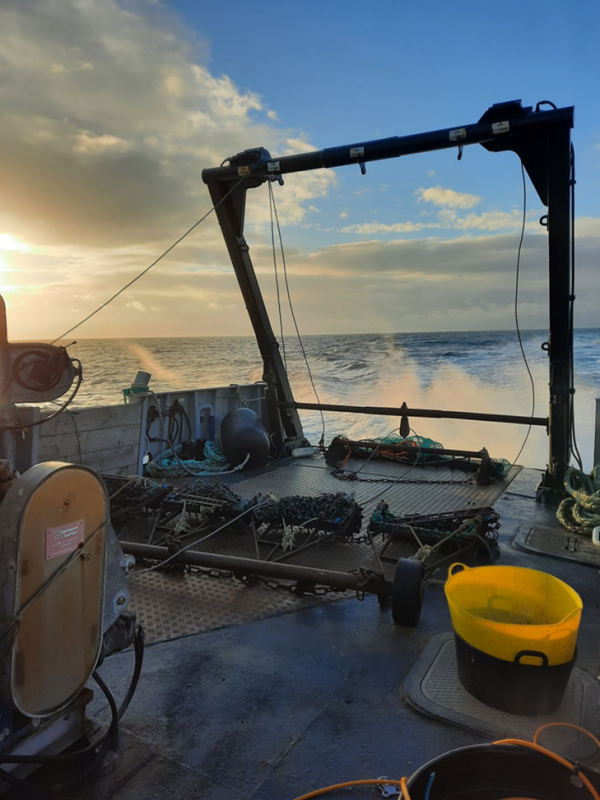 It is also the beam trawl that provides for the secondary purpose, which is to monitor changes in seabed biodiversity (animals and seaweed, or macroalgae), which may also be an indicator of recovery.

As well as the sampling gear, we also use a drop-down, high-definition video camera to see the seabed in real time, and also to record the video for later analysis. This enables us to visualise and identify the seabed type and the biological communities associated with it. Based on past experience we now use a live-feed camera, with a light, and also a HD GoPro, which provides back-up video and still images with a wider field of view. 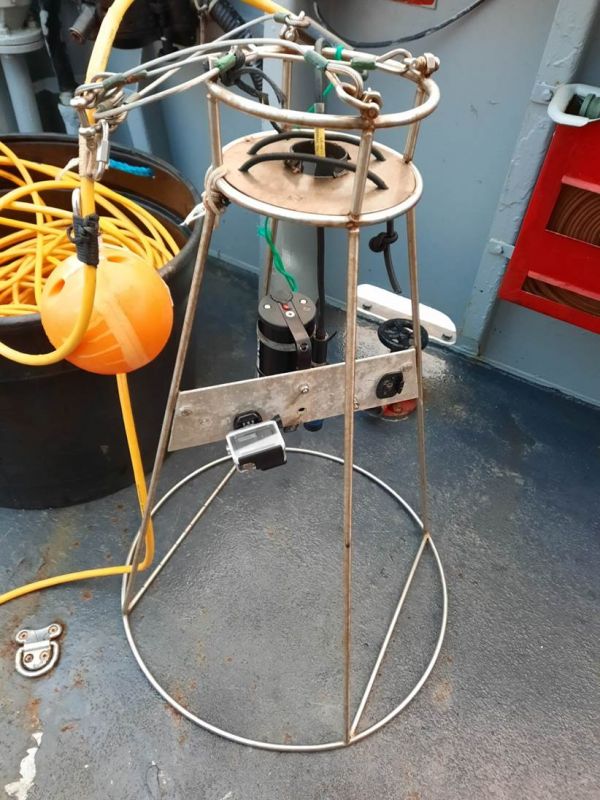 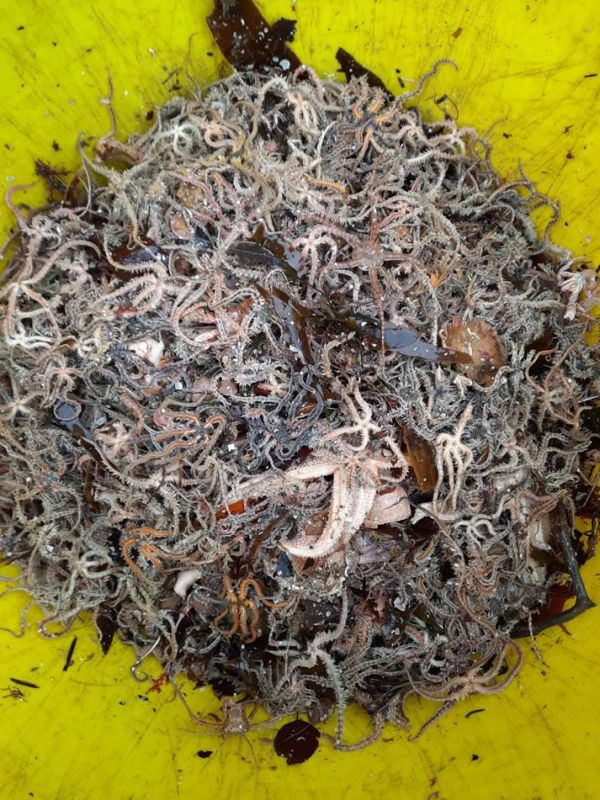 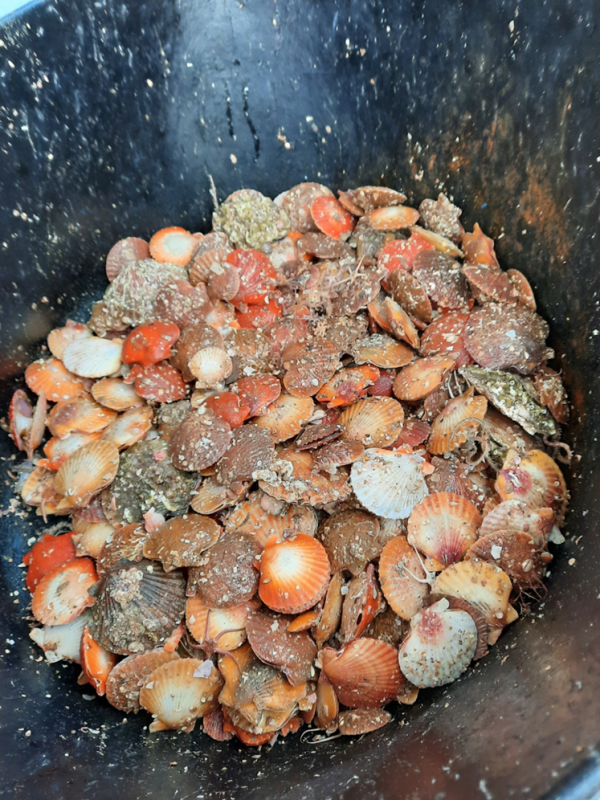 Understanding where the scallops and queenies are, how many, and their size, informs whether its worth starting fishing again, whether the fishing should be in one particular area, and also how many are recruiting and their growth rates – this allows us to balance catches with maintaining the long-term population. Surprisingly during our trawls we also caught an old ‘spat’ collector from 2018 which is a settlement surface for catching new larvae and, not-surprisingly, it actually had some very small (less than 1cm) queenies on it. 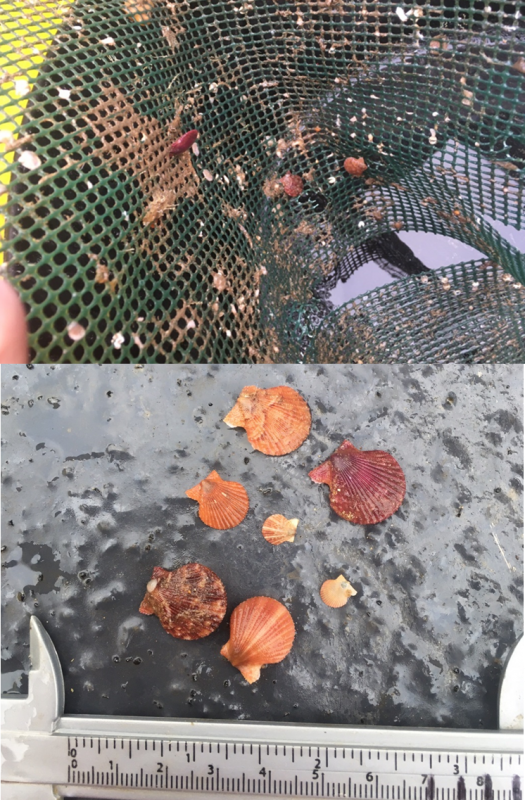 Once the contents of the sampling gear has been counted, everything goes back into the sea; although we do prioritise those animals less tolerant of emersion, like fish.

In particular, on this survey there were a lot of rays including; spotted ray, thornback ray and cuckoo ray.

These fish are vulnerable to seabed damage, as their egg cases (sometimes called mermaid’s purses) are attached to seaweed etc. for up to 9 months. So high numbers of rays in the samples may mean they are benefitting from improved seabed conditions.

If you want to know more about shark and ray eggcases check out the Shark Trust’s Great Eggcase Hunt and try something different with the family this Christmas – scouring the strandline of your local beach for these fishy treasures.

The egg cases from the species shown above, taken from the Shark Trust's website, are as follows. 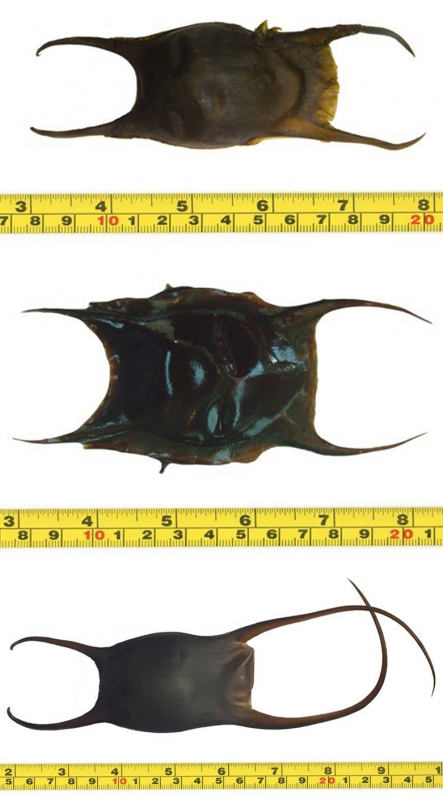 With a sea area seven times that of our land, Manx marine science can be challenging in its scale and the difficulties in actually seeing what’s underwater, but it is an increasingly important environment for the island’s biosphere, biodiversity and economy. Surveys like this one; collecting samples, and spending time looking at the number of different species provides the basic data for monitoring the Island’s marine biodiversity. This allows us to compile an ongoing species inventory, monitor the recovery of protected areas, or the deterioration of other places which might need additional protection.

A species-rich and well-functioning marine environment give us better ecosystem services – whether that’s providing our seafood, processing our treated sewage, reducing climate change effects or providing recreation for anglers, divers or tourists.

Our Island’s biodiversity is recorded on a specialised database, the NBN Atlas Isle of Man, which is linked to the wider UK equivalent.

Using the website tools, you can search for a particular species, or draw a shape and find out what’s been recorded within that area. Species records from this recent survey will be added to the database, and here are a few highlights: 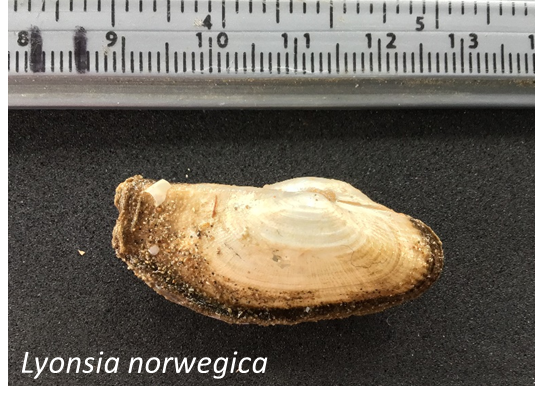 The bivalve mollusc, Lyonsia norwegica: not previously recorded from this area 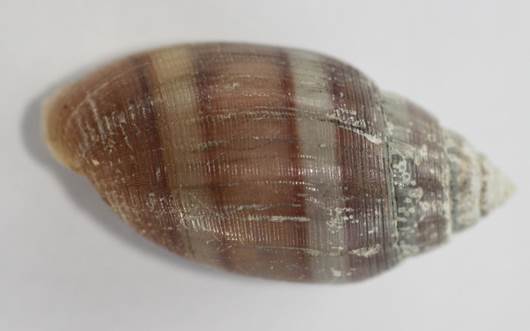 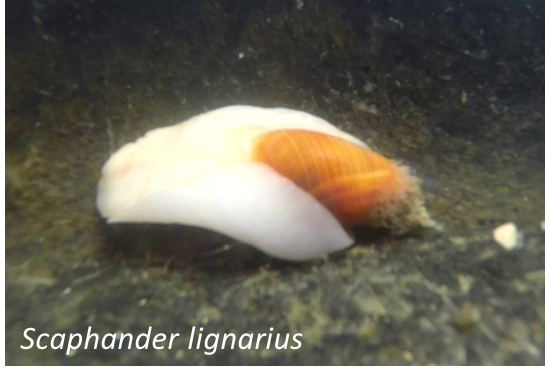 Seasnail, Scaphander lignarius, (the ‘canoe bubble’) an unusual snail, too big for its shell, only found on sandy, seaweed areas 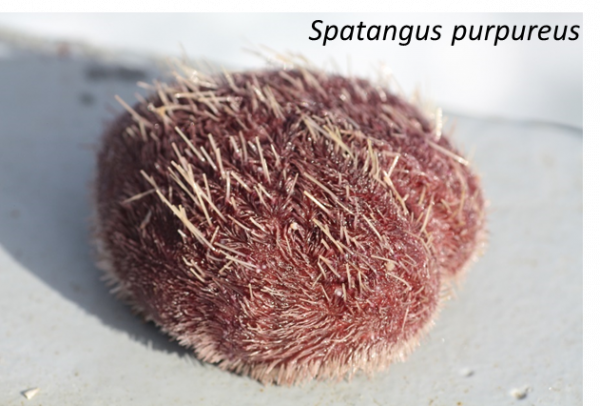 One of the benefits of working at sea, from time to time, is the rare and special sighting of some of our Island’s whales and dolphins. There are five common species around the Island; common porpoise, bottlenose dolphin, Risso’s dolphin, common dolphin and minke whale. 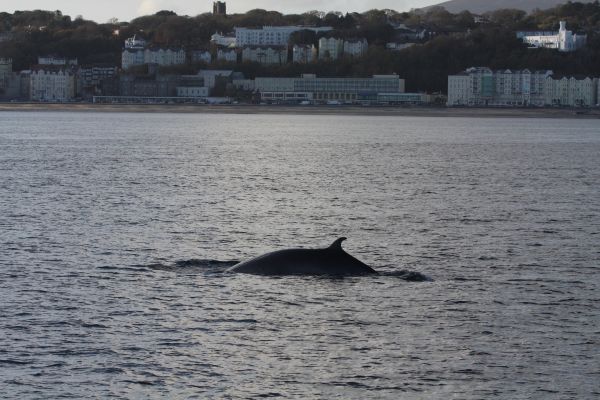 On this same survey in 2018 we encountered a minke whale in Douglas bay (above), but this year the main event was the pod of bottlenose dolphins which turn up here over the winter months. This large group, of up to 100 individuals, moves around the Irish Sea, but is particularly associated with Cardigan Bay where it has been well studied. We know it is the same group because images of the dolphins' dorsal fins, which can be distinctive in individuals, have been compared and matched from Wales and the Isle of Man as far back as 2012. See this news story.

Many individual animals have distinctive marks on their bodies that can be used in their identification. The most prominent and photographically visible part of dolphins is the dorsal fin, and there are several regional databases of fin images of various species, including bottlenose and Risso’s dolphin. 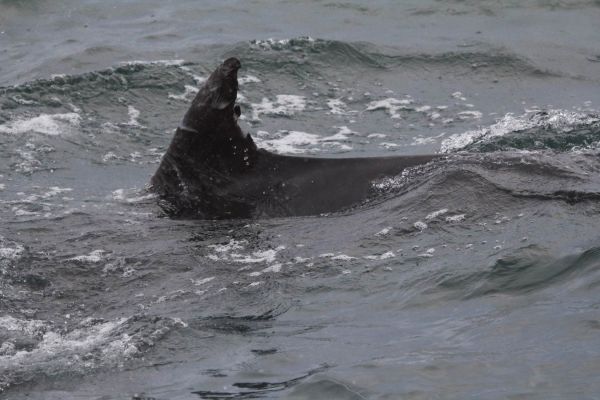 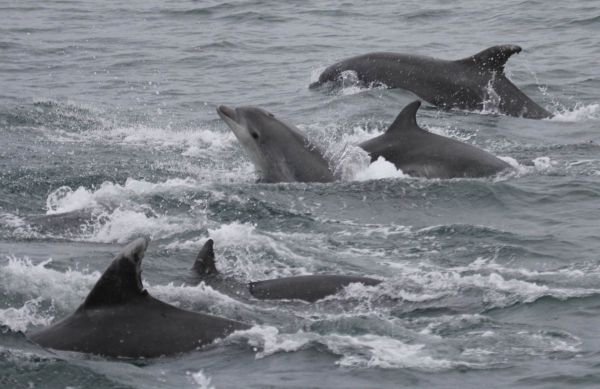 The images taken on this trip have since been provided to Manx Whale and Dolphin Watch for sharing with other regional organisations, to help track distributions etc. and monitor individual animals – including some new juvenile additions to the group.

For further information about the Cardigan Bay (and Manx) bottlenose dolphin pod, and their  monitoring project, visit the Sea Watch Foundation website

For further information about Manx cetaceans, including recent and historic sightings, go to the Manx Whale and Dolphin Watch website.

Eel grass, or Zostera marina, is an unusual marine flowering plant, and has more in common with grasses than seaweeds. It provides an important habitat and supports a wide range of other species, including being a nursery for commercial and recreational fisheries, but it has also come to prominence recently in the fight against climate change; as it is both a carbon store and a barrier against coastal erosion and storm action.

However, eel grass beds have suffered significant declines in the last century, with estimates of up to 90% loss compared to historic abundance. As such, it’s been the focus of several high-profile restoration projects around the world, and is legally protected under the Manx Wildlife Act 1990, with all of its four local sites being included as specially protected zones within one of our Marine Nature Reserves.

So, it was a big event when a local diver reported a new eel grass bed at Bulgham Bay, which is at the western end of the EDG-ERA, and Manx Wildlife Trust and Seasearch have already undertaken some exploratory dives. However, diving does limit the amount of time spent underwater, and so we took the opportunity to use the drop-down camera at the end of our survey to better define the boundaries of the new eel grass bed. 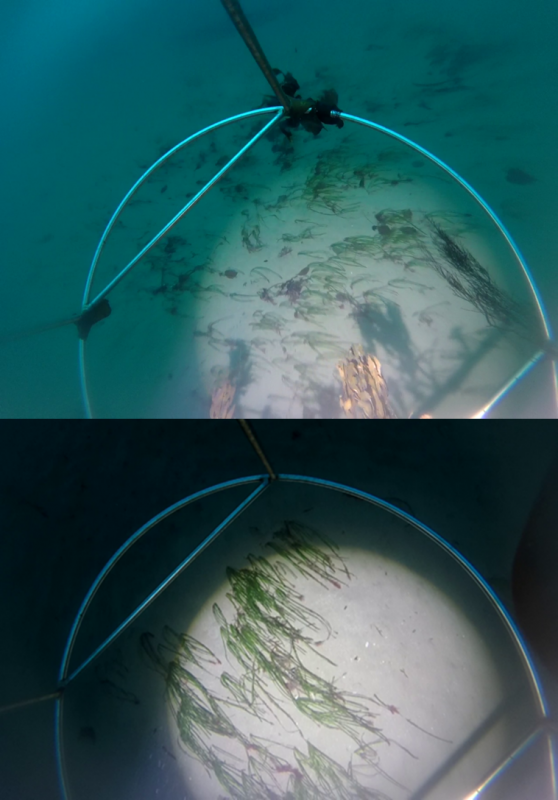 On a calm, slack-water tide the Barrule was able to drift around the bay at a depth of less than 12m, as far as sufficient light penetrates, and which was also the limit of the eel grass. In real time, from the comfort of a TV screen, we were able to plot the presence of the plant and establish an initial distribution. 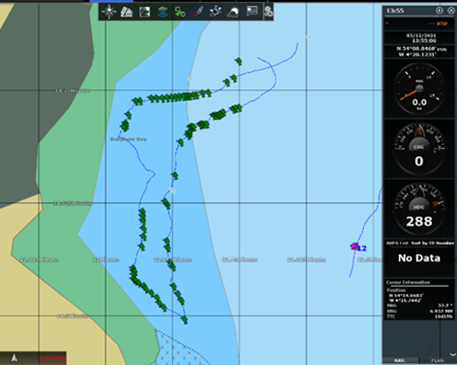 We can then translate that boundary into a rough estimated coverage, which will be useful in the future for habitat monitoring and blue carbon auditing.

So, all-in-all, quite a lot happened and was achieved on our two-day survey, and it was certainly a welcome change to get out of the home or office workplace and back to nature for a while.