Our #CloserToNature series of blogs aims to keep us connected with nature this spring and summer while staying at home. Kate Hawkins tells us it's a great time of the year to visit inland waters and see 'charismatic, colourful aerial acrobats' - dragonflies and damselflies - darting about and how to avoid disturbing them.

Our #CloserToNature series of blogs aims to keep us connected with nature this spring and summer while staying at home. Kate Hawkins tells us it's a great time of the year to visit inland waters and witness 'charismatic, colourful aerial acrobats' - dragonflies and damselflies - darting about and how to avoid disturbing them:

Our warm and sunny spring has been great for insects and an easing of lockdown rules on daily exercise is allowing us to venture further afield to find them. If media reports are to be believed, the restrictions disrupting our normal routines and activities have led to a greater appreciation of the natural world. 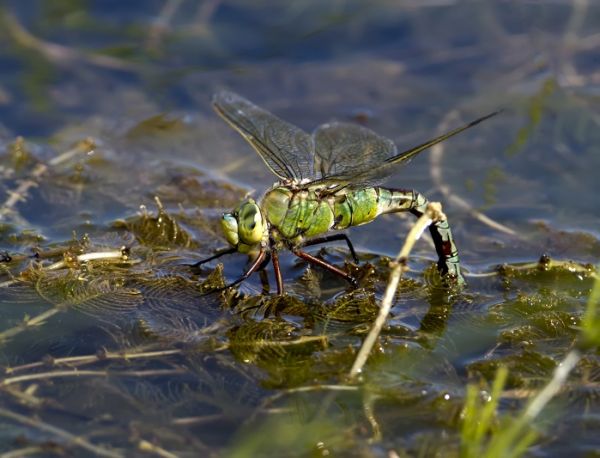 With time on their hands, and perhaps the need for distraction in worrying circumstances, more people seem to be curious about the plants and animals that share our space and photographs of them are popping up all over social media.

As a group, the dragonflies and damselflies are starting to attract more attention as their flying season gets under way. To many nature watchers, they have it all: charismatic, colourful, aerial acrobats in the sunshine and large enough to study with little specialist equipment.

Fierce predators of other insects and freshwater invertebrates, both in the adult winged stage and as aquatic larvae, they are completely harmless to humans and with care and stealth (and a bit of luck) they can be safely approached and photographed.

Damselflies tend to waft, jewel-like, in and out of tall vegetation at the edge of dubs and reservoirs or skim across the water surface during mating and egg deposition.

Dragonflies are fast, more powerful flyers, the hawkers patrolling up and down hunting for prey, the darters more given to perching and dashing out to catch insects. 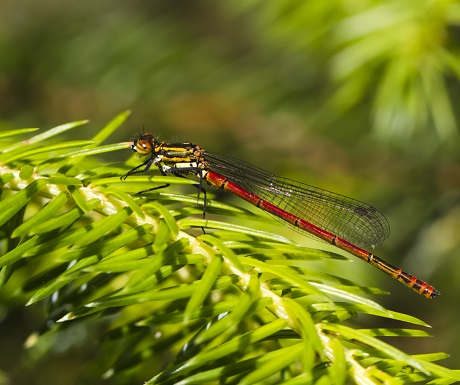 Time spent quietly watching these insects as they hunt, secure a mate and find safe places to lay eggs is always rewarding, especially as they are most active in warm sunshine which makes wildlife watching comfortable for us too.

Dragonfly and damselfly larvae are, in contrast to the adults, dull brown or greenish coloured and usually skulk around vegetation and debris on the bottom of dubs and lakes on the prowl for small crustaceans, snails, aquatic fly larvae (including mosquitoes you will be glad to know) and, in the case of the fully grown large dragonfly larvae, tadpoles and small fish.

They are, themselves, prey for larger fish, presumably including the rainbow trout stocked in the likes of Cringle Reservoir. All in all, dragonflies and damselflies are part of the ecology of our freshwater bodies and can be important indicators of the health of freshwater and marginal habitats.

If we want the colour and drama of these insects to continue lighting up our Island we need to recognise that they must have safe, undisturbed places to breed. That is why it is important to take care when approaching the edges of dubs and reservoirs not to trample marginal vegetation or stir up bottom sediment.

Final stage dragonflies and damselflies need plant stems emerging from the water on which to climb up, shed their skins and change into adults. As new adults, their wings are soft and vulnerable to damage so they need to remain relatively hidden and undisturbed for a while to harden up before they venture into flight. 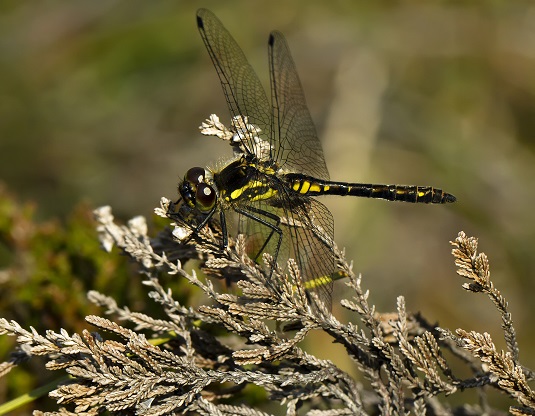 Similarly, if bottom sediment is stirred up, dragonfly and damselfly larvae and the creatures on which they prey can be physically damaged and their ability to breathe harmed.

This is something to bear in mind when paddling in freshwater or encouraging your dog to jump in for a swim. However, rather than stopping dogs going into pools (and who doesn’t like watching dogs having a grand time in the water) better to exercise some judgement over where best to send them in.

Try to keep to one end of a pool large enough to accommodate some disturbance in one area rather then letting dogs go anywhere they like.

That way, at least part of the dub or fire pool will remain relatively undisturbed.

And if the pool is small, enjoy watching the wildlife around it but leave the water undisturbed for aquatic plants and invertebrates such as dragonflies and damselflies.