The idea to create some guidance for children around the Countryside Code originated from a local farmer, Paula Creer, who realised that visitors to the countryside were not getting much information about environment they were in, and the need to protect agriculture.

This idea developed with the arrival of Jelly and Oof, orphaned farm animals that Paula took care of. Jelly is a belted Galloway calf, and Oof is a Teesdale cross Swiss Valais lamb.

The idea for a storybook. ‘The Adventures of Jelly and Oof’, evolved with the animals as the main characters. The Manx NFU’s book on the Countryside Code tells the story of the two animals and what happens when they are accidentally let out of their field. 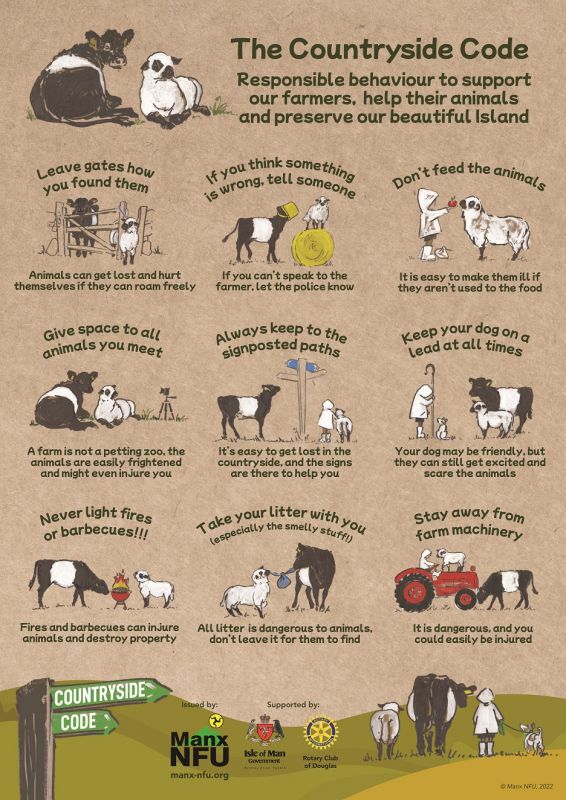 Supported by the Department of Environment, Food and Agriculture and Biosphere Partner Douglas Rotary Club, and with help from the Department of Education, Sport and Culture’s Jo Callister, the storybook has been created to accompany primary school visits, with Jelly and Oof helping children to understand the need to follow the code and relate it to real farm animals.

We were extremely pleased to be invited to Rushen Primary School during Schools’ Biosphere Week (27th June-1st July) for the first official outing. Pupils proved themselves to be both enthusiastic and considerate about the Manx countryside and local farms. They had a lovely time meeting the animals and asked many interesting questions.

The animals have been more than pleased to be the centre of attention and love all the fuss.

If any other primary schools would like a visit, contact Sarah and Carolyn at Manx NFU via office@manx-nfu.org

The Manx NFU is a proud supporter and partner of UNESCO Biosphere Isle of Man.