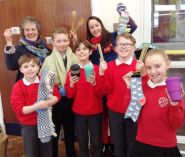 An Isle of Man primary school has plastics in its sights as it strives do its bit for the planet.

Pupils at Ashley Hill Primary have taken up the challenge to reduce use of, and recycle more, single-use plastics.

Peter Lewis, Headteacher, said the school partners UNESCO Biosphere Isle of Man, which promotes the Island as a special place for people and nature.

'Year 1 had a talk by Bill Dale, of Beach Buddies, and was saddened to hear about the impact plastics have on animal life, particularly in our seas and oceans,' Mr Lewis said.

'On Monday, we invited in Shakti Man, of Ramsey, who gave an assembly on the harm caused by plastics, what they can be put to use for – including some of the clothing they sell – and alternative materials.'

Throughout Fairtrade Fortnight (26th February to 11th March), pupils will carry out litter picks to see how much plastic is littering school grounds.

Pupils will also take to school unwanted plastics, including items that would normally go into household waste.

'Onchan Commissioners is providing us with an extra plastics recycling bin, in addition to the one we have, and our challenge is to collect as much unwanted plastic as possible and get it recycled,' Mr Lewis said.

'These activities will inspire the children to think about their use and re-use of plastics and the dangers of plastics entering the environment.'

Geoffrey Boot MHK, Minister for Environment, Food and Agriculture, said: 'It is heartening that schools that partner UNESCO Biosphere Isle of Man are working to reduce and recycle plastics.

'Young people have a vital role to play if we are to protect our environment and keep the Island a special place for people and nature.'