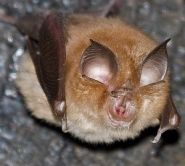 The Manx Bat Group has for the first time officially recorded the presence of Lesser Horseshoe Bats in the Isle of Man.

This species was not known to be resident and the discovery brings the total number of bat species recorded in the Isle of Man to nine.

The identity of the species was confirmed by DNA analysis of droppings retrieved from the cellar of a house in the south of the Island. There were no bats present, so it is not known how many roost there.

In November 2006, a member of the public reported a grounded bat, thought to be a Lesser Horseshoe, at a location two miles away. However, the bat flew away before its identity could be firmly corroborated by the bat group.

The Lesser Horseshoe Bat (Rhinolophus hipposideros) is one of Britain’s smallest bats, weighing between four and nine grams. In the late 19th century it was common as far north as Yorkshire but has not been recorded there since 1944.

Numbers declined drastically during the last century although in recent decades there has been some evidence of recovery. Today, its British Isles range is restricted to Wales, South West England and the western counties of Ireland.

The recent discovery was made during a monitoring visit to a roost site for other bat species.

This programme is supported by a generous grant from the Manx Lottery Trust's Community Fund, which has enabled the bat group to purchase some specialist ultrasound detectors which a team of volunteers uses.

Some bat roosting boxes have also been purchased using the grant and these will be deployed this year.

Kevin Wells, Chair of the Manx Bat Group, said: 'This is extremely exciting news. This is the second new species recorded in as many years and shows how important projects such as Bat Search and our roost monitoring are.

'We are grateful to The Manx Lottery Trust Community Awards Programme for its grant. This has allowed us to purchase the new equipment that has allowed our group to discover more about some of Manx wildlife’s most interesting species.'

The group will be carrying out further fieldwork in the coming season and beyond to find out more. It needs volunteers to join its monitoring activities this summer.

You can get in touch via the Manx Bat Group's Facebook page, its website www.manxbatgroup.org.im or its helpline 07624 366177.

Video: Bob Moon from the Manx Bat Group speaks to Manx Radio about the find.