The Isle of Man was the first country in the world to introduce votes for women in national elections, in 1881. England only did this in 1918, 37 years later. 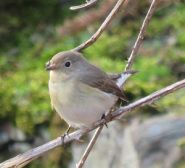 The Calf of Man is one of 20 'official' locations around the British Isles where movement of migratory birds is monitored. Aron Sapsford, Manx Wildlife Trust's Ornithological Warden on the Calf, writes about its importance and its most recent 'season':

On the 9th April 2019, we celebrated the 60th anniversary of the bird observatory on the Calf of Man.

As documented in the Biosphere newsletter a year ago, the first warden, Einar Brun, crossed to the Calf in April 1959, with his wife Dido, and began to record the birds that breed there and move through on migration.

The observatory is part of the Bird Observatories Council’s network of 20 locations, situated around the British Isles, which monitor the annual movements of migrant birds as they pass through on their way to and from breeding and wintering quarters.

Daily observations of the species and numbers of birds involved are recorded and data is forwarded to the British Trust for Ornithology.

The trapping of migrants is carried out daily, weather permitting, using fine mesh mist nets as well as several wire-mesh ‘Heligoland’ traps, with each bird then being fitted with a uniquely numbered ring. Each bird is aged and measured before being released, unharmed, on its journey.

We can learn a great deal about bird movements from this work, and have received reports of ‘our’ birds from as far away as Greenland, Russia, Senegal and South America.

Many of the birds that stop off on the Calf are only present for a very short time, often making landfall during the early hours of the morning before feeding up and continuing on their journey.

By the time that most day visitors land on the Calf, much of our work has already been conducted. However, we are happy to demonstrate bird-ringing to anyone calling at the observatory.

Every year has its highlights and, while there were no major bird rarities recorded in 2019, we did enjoy a fantastic second half of May, which produced the Calf’s 19th record of Nightingale along with several other scarcities, including a Melodious Warbler, two Subalpine Warblers and a Red-breasted Flycatcher.

During autumn we were treated to an above average passage of seabirds, including many divers and skuas, plus a number of Leach’s Petrels, a singles of Sabine’s Gull and Grey Phalarope.

Moth trapping has been conducted with greater frequency in recent years and 2019 was an excellent year, with 211 species of moth recorded. This consisted of 128 macro and 83 micro species and included 11 new species for the Calf.

But the most amazing spectacle of the year was undoubtedly the invasion of ‘clouds’ of Painted Lady Butterflies which could be seen in their hundreds all over the Calf during July.

The Calf of Man is an important safe haven for many breeding species, including a number of threatened seabird species.

At the turn of the last century, it was realised that many of the seabird species, including the native Manx Shearwater, were at risk of being ‘lost’ as breeding species on the Calf, due to the continued presence of the Brown Rat.

In 2012 a partnership of Government and NGO organisations began the task of trying to eradicate these ‘longtails’ from the Calf, with the continuing programme of monitoring work now being overseen by Manx National Heritage and Manx Wildlife Trust staff.

While it hasn’t yet been possible to declare the Calf as being ‘rat-free’, this programme of work is reaping rewards, with breeding numbers of shearwaters increasing from fewer than 150 pairs in 2012 to more than 600 in 2019.