Loaghtan is a breed of sheep unique to the Isle of Man – thought to have been introduced by the Vikings. The meat has been given the European Union Protected Designation of Origin (PDO) stamp. 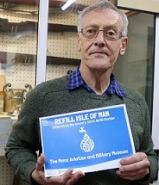 The Isle of Man now has 100 #RefillIsleofMan stations, where you can fill up bottles free with tap water while out exercising, shopping and sightseeing.

UNESCO Biosphere Isle of Man launched #RefillIsleofMan in January and we are delighted so many premises have come on board to help reduce the number of plastic water bottles sold - and carelessly disposed of.

Our 100th #RefillIsleofMan station is the Manx Aviation and Military Museum, whose Director, Ivor Ramsden, called in at our recent drop-in at the Sea Terminal to sign up.

Martyn Perkins MHK, Member for Ecosystem Policy at the Department of Environment, Food and Agriculture, visited the museum to present a certificate to Mr Ramsden to mark the milestone.

The fascinating museum, near Isle of Man Airport, tells the story of the Isle of Man at war and the Island’s aviation history.

Mr Ramsden said: ‘The museum tries to be green. We recycle waste and a lot of the material used in our display cases is recycled. Even our buildings are reused World War Two Nissen huts. Cutting plastic use is a cause we believe in.’