The restoration of Rosehill quarry

A disused quarry that is managed by Biosphere Partner Colas IOM Ltd is a species-rich paradise thanks to sensitive collaborative work by the company, Manx Wildlife Trust (MWT) and the Isle of Man Government. Hannah Midghall of MWT tells us more about this special site.

A disused quarry that is managed by Biosphere Partner Colas Isle of Man Ltd is a species-rich paradise thanks to sensitive collaborative work by the company, Manx Wildlife Trust (MWT) and the Isle of Man Government. Hannah Midghall of MWT tells us more about this special site:

Arriving on site with Andree Dubbeldam (Manx Wildlife Trust Conservation Officer), we signed in at Colas HQ, donned our helmets and high vis jackets, and headed for Billown, the Island’s only working limestone quarry.

We were here to meet Breeshey Kermode of the UNESCO Biosphere Isle of Man team to show her the work being done to restore Rosehill Quarry, three acres tucked into a corner of the quarry complex that is an Area of Special Scientific Interest (ASSI). 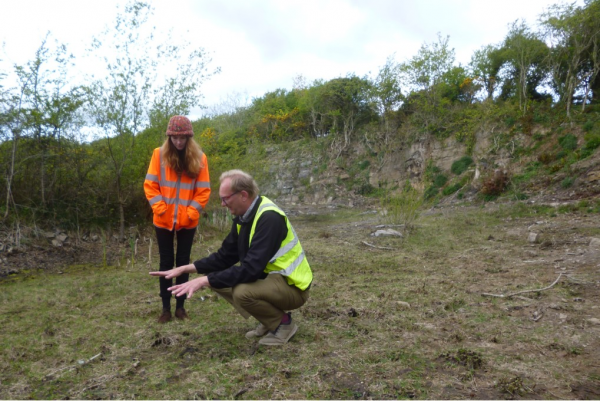 Seymour Corkill, who manages the site for Colas and has worked closely with MWT and the Government for many years, greeted us when we arrived. He explained: 'This quarry pit area has not been active for many years, estimated last used in the 1900’s. The site has been left deliberately untouched to allow the pit to be returned to nature.'

Making our way into Rosehill quarry, it was immediately clear from piles of branches and bare ground that major work had taken place.

Andree explained: 'Although it can be upsetting to have trees removed, this destruction is ultimately a constructive endeavour for an area that will be significantly more biodiverse and far better for wildlife.'

The site was cleared sensitively, and what would have taken years using volunteer work parties took three days using the resources of the large quarrying firm.

Too many trees would leave more sensitive species in the shade, unable to thrive. Bee Orchids, for example, are a particularly rare species on the Island, only found on a few other sites on the Island. They are a protected species under the Wildlife Act, and have very particular ecological needs in order to blossom. Rosehill quarry is ideal due to its lime deposits that have established extremely mineral rich land, making it an exceptional ASSI.

As we progressed further on site, Andree showed that mounds of upturned earth left from landscaping have been kept as they create the ideal microclimate for many invertebrates. Breeshey added that they are also a great method of carbon storing, as locking carbon in soil is just as important as terrestrial stores, such as trees.

Colas is hoping to get two or three Manx Loaghtan sheep on site for conservation grazing, which is possible due to the fencing constructed by University College Isle of Man landscaping and conservation students.

We turned to see the striking limestone quarry wall, which Andree explained has more than aesthetic appeal. Its south facing aspect creates a suntrap for an array of wildlife, and causes a slight increase in temperature, taking Rosehill ASSI ecologically 50 miles south.

This produces a microclimate that could act as a landing pad for invertebrates migrating north due to the rise in Earth’s temperature, capturing biodiversity in flight. 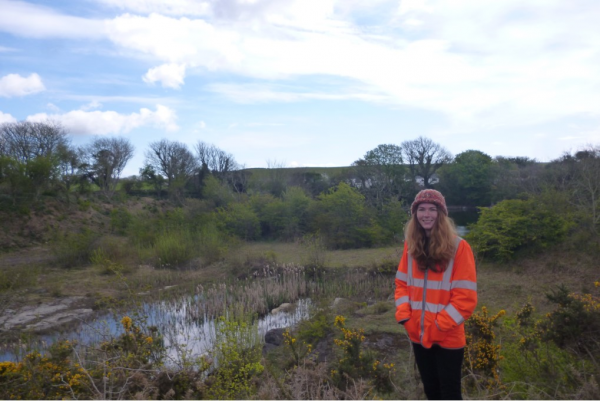 The site will soon be expanded to cover the adjacent Broomhouse quarry, with a wildlife corridor connecting the two. There is potential for installing a bird hide on site for public viewing of the amazing conservation work taking place, however we also need to ensure the wildlife is protected from human damage.

The future of Rosehill quarry as a nature recovery site is bright and beautiful, and we hope to keep it that way.