Long ago, my father used to take my brother and I to Baldwin after Church and we would climb Injebreck Hill, which is only 400 meters high but has magnificent views down the valley to West Baldwin Reservoir far below. From there, the River Glass wends its way to Douglas where it meets the River Dhoo. Many decades later, Injebreck and Baldwin are little changed.

The topography of the Isle of Man is simple. In the centre are many hills over 1000 feet, one mountain, and not many people. Most live in coastal towns. Sometimes the hills drop dramatically to the sea. On other occasions they shape gorges created by mountain rain water escaping to the sea. This has created many scenic glens with paths and bridges.

During the Covid-19 lockdown I started climbing hills again and now it’s over I plan to continue. In the past month or so, I've climbed three in ‘The Beautiful South’, all less than five miles from my home.

Cronk ny Arrey Laa, a lookout in Viking times, was the easiest climb and has the best views. To the West, were the Mourne Mountains of Northern Ireland, to the East stood the hills of the Lake District in England and, looking to the north of the Island, I could see North Barrule, almost 20 miles away. 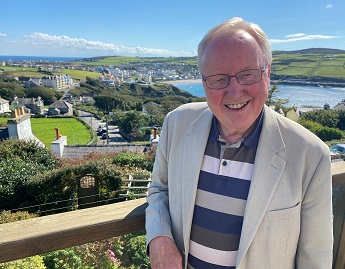 My second climb was the hardest - the Sloc - not named on my Ordnance Survey but close to ‘The Stacks’. It has dramatic drops to the sea, often not far off the steep walking trail.

The third was South Barrule. In historical times the location of a Celtic Iron Age hill fort at the summit. It has a commanding view of both the south and centre of the Island. And it was the home of the legendary Sea God, Manannan, who, when he saw hostile ships from his eerie on South Barrule, would cloak the Island in mist, so that invaders would either end up on the rocks or give up and go home.

How many people did I meet on these three climbs? Not many – a handful. I like conversing with people but not all the time. When you are alone, you can lie down on the purple heather and watch the clouds, smell the wild flowers, listen to the birds and the sea and take in magnificent views.

I was born and brought up in Douglas and left the Island for many decades but always planned to return. I did so in 2002.

When away I lived in Newcastle upon Tyne, Windsor, Beaconsfield, Toronto, New York and Connecticut...and Oxford, where my family spent 22 years.

Where did I most enjoy living? You guessed it: the Isle of Man, followed by Newcastle, because Northumberland also has beautiful beaches, wild moors and is close to the Cheviot Hills. Oxford has many advantages but I missed the hills and the sea. I liked working in Connecticut but it was flat and wooded and I missed the big horizons.

Place and Biosphere are important, but so are people. Whether born here or not, people on this Island have an independent spirit, resilience (our national motto, associated with the Three Legs of Mann symbol, is ‘Whichever way you throw me, I stand’) and loyalty to the place.

While there are many more people, cars, and houses than in my youth, the essence of the place remains: wide open spaces, glens, spectacular views, and green hills by the sea.