That was the message from Geoffrey Boot MHK, Minister for Environment, Food and Agriculture, who last night presented the prizes to the Poetry Map’s winner and runners-up.

The Poetry Map is a collaboration between UNESCO Biosphere Isle of Man, Culture Vannin and The Manx Bard.

It attracted more than 170 poems, which can be seen pinned to their locations on Culture Vannin’s website.

The Minister said: ‘The Poetry Map connects people with their surroundings and encourages them to explore and enjoy the Isle of Man, two aims of our UNESCO Biosphere.

‘We were delighted by the quantity and quality of poems submitted, linked to locations all over the Isle of Man and not just the obvious beauty spots and landmarks.

‘The Poetry Map will be enjoyed by locals and visitors alike for years to come – and I hope it encourages people to explore and enjoy parts of the Island that are new to them and look at them through the eyes of the poets.’

David Callin’s poem ‘Alleluia’ won the competition. It is set in Slieau Whallian Plantation, St John’s, a stone’s throw from his home.

David said the poem celebrated the flowering of spring but was also inspired by seeing his wife, who dresses practically, in trousers, for work and gardening, in a summer dress.

He obtained the names of the species from one of his favourite books, Geoffrey Grigson's ‘Englishman's Flora’.

David, an accountant, discovered a love of poetry at Douglas High School, attends open mic poetry nights at the Bath and Bottle, Douglas, and has been widely published in magazines and on websites.

Runners up were Janet Lees, Howard Caine and Jacob O’Sullivan. 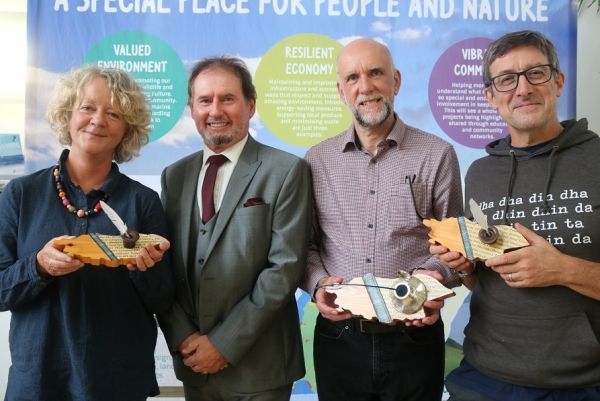 Janet’s poem ‘Sisters’ was inspired by times she shared with siblings Niki and Carole on family holidays to the Isle of Man.

‘We came over every year when we were young to stay with our grandma, Eva Corrin, in Port St Mary. The first thing we would do was run down to The Point and Perwick Bay to play on the rocks and the beach,’ said Janet, who has won numerous prizes for her work as a poet, artist and photographer. ‘The endless hours we spent there are some of my happiest memories. My sisters have always been my closest friends in the world and the poem is in memory of Carole, who died in 2014. I miss her every day.’

‘It was based on something the late John Kennaugh, my fellow Manx Radio presenter, said to me; that there’s a special quality of light at Cronk-y-Voddy,’ Howard said.

‘I took that as a start point, and riffed around the idea of the light falling on the fields, largely undeveloped yet sculpted by the weather, with John still enjoying them from his spiritual vantage.

‘The name Hill of the Dogs has always been a fascination and its origin seems lost in time, which adds to the area’s character.’

Jacob’s poem, ‘Imagining Lobsters’ is about boyhood dips in the sea, including a day he didn’t venture into the water.

‘This poem was written after standing on the old jetty at Port Soderick for 20 minutes one summer's day, trying to convince myself to jump in and swim round,’ he said. ‘My friend Liam was in the car beeping the horn at me to either swim or not swim, but to hurry up. It made me think of numerous other similar experiences, when friends had gone in before me, and how lucky we were for this to be the norm on a sunny day in the Isle of Man.’

The winner and runners up received beautiful hand-crafted trophies made from local wood by craftsman Dave Newsham, who works for DEFA.

The poems can all be seen on the Poetry Map of the Isle of Man on the Culture Vannin website.