Edmund Southworth, Director of Manx National Heritage (MNH), represented the Isle of Man at the annual Inter-Island Environment Meeting and the Wilder Islands conference that formed part of it. He writes about the value of attending.

Edmund Southworth, Director of Manx National Heritage (MNH), represented the Isle of Man at the annual Inter-Island Environment Meeting and Wilder Islands conference that formed part of it. He writes about the value of attending:

The Inter-Island Environmental Meeting is held every year in one of the Channel Islands of Jersey, Guernsey or Alderney. The Isle of Man is often represented.

I was invited to attend following a meeting earlier this year with the Jersey National Trust. Never having been to Alderney, I was delighted to accept the invitation and I agreed to deliver a presentation on the work Manx National Heritage has been doing on the Calf of Man in recent years.

Islands are hugely important in biodiversity. They can act as lifeboats for species or habitats and refuges for species which often live nowhere else. Yet they are often too small to have the resources to tackle the challenges they face. Indeed the challenges are often greater because of transport issues and lack of expertise.

Alderney is a delightful place – but took three flights to get there. Its only 3.5 miles long and 1.5 miles wide, with 2000 inhabitants. But the warmth of the welcome was wonderful. Many local businesses had helped the Alderney Wildlife Trust with the event and they were keen to show off their great local food. We met in the local cinema on the high street and had lunch at the pub across the road.

One of the great things about these small conferences is the chance to meet with people from different places and different backgrounds. There were more political representatives than previously – as the conference was discussing a new Blue Islands' Charter focusing on the marine environment. 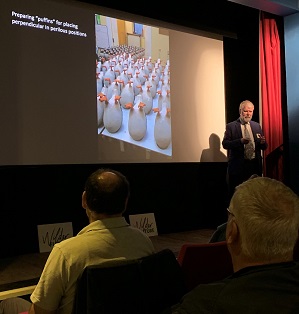 Of course, climate change is a hugely important topic to islanders and we had visitors from Caribbean islands such as Montserrat, Anguilla and the British Virgin Islands. I was fascinated to hear about the challenges they face, such as overgrazing by feral goats and the damage done by 'longtails' and even cats and mice.

These are very similar to our own challenges here on the Isle of Man and the solutions are similar. Dealing with the invasive species is of course only one part of a wider large scale ecosystem.

Many people at conference were familiar with the Isle of Man from visits or training here and there was great enthusiasm for the work we do.

MNH is, of course, the National Trust here and it was notable that National Trusts are active in many of the smaller island communities. It feels good to be part of this wider movement.

The presentations at the conference covered a wide range of topics. There is an increasing amount of technology used to monitor and track birds, mammals and insects. Several presentations used underwater video to study the impact of fishing. Most presentations involved some community element and partnership working.

The most striking for me were the work on Jersey and Guernsey to monitor and control the spread of the Asian Hornet. This invasive species spreads at an alarming rate and the communities in both islands are actively recruiting volunteers to tackle the problem.

The conference was live-streamed and most of the presentations are available on the Alderney Wildlife Trust’s Youtube channel.