How does the ocean help us respond to the climate and ecological emergencies? This is the question being addressed by Manx Blue Carbon Project - an exciting initiative being delivered by the Department of Environment, Food and Agriculture in partnership with the National Oceanography Centre and Swansea University.

How does the ocean help us respond to the climate and ecological emergencies? This is the question being addressed by Manx Blue Carbon Project - an exciting initiative being delivered by the Department of Environment, Food and Agriculture in partnership with the National Oceanography Centre and Swansea University.

Just as trees and plants capture and store carbon from the atmosphere, ‘sequestering’ it in terrestrial ecosystems, this also happens in marine ecosystems.

So-called ‘blue carbon’ is stored in underwater systems - from seagrass meadows and salt marshes, to the more mysterious muddy sediments and beds of maerl (beautiful, complex structures made of hard red algae, which also provides shelter for a wide variety of weird and wonderful sea creatures).

Mapping sites around the Island to be studied

As well as being a fantastic nature-based solution, blue carbon habitats also provide other important services such as flood and storm protection, improved water quality, reduced ocean acidification, and supporting endangered species and populations of valuable fish and shellfish.

‘The sea makes up over 85% of the Isle of Man’s territory, so – while not a substitute for reducing emissions – blue carbon likely has an important part to play in our response to both the climate change and biodiversity crises,’ says Jacqui Keenan who, with Rowan Henthorn, forms the Manx Blue Carbon Project team (main picture).

‘We don’t yet know the full extent of our blue carbon habitats, or how much carbon they can take in and store – and that’s what we’ll be investigating over the coming months.’

Leading scientists from the National Oceanography Centre and Swansea University – including Manx scientist Dr Claire Evans - visited the Island at the beginning of March, conducting initial drone surveys around the coast to look at seagrass and kelp. 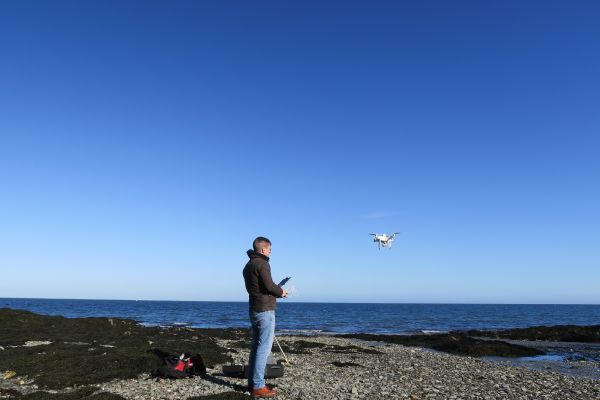 Taking the drone for a spin at Garwick

They will take samples from both nearshore and offshore sites, to determine both how much carbon is stored, and how fast it is being captured.

‘The Isle of Man’s Biosphere status, our history of marine science in collaboration with both the fishing community and conservation organisations, and our strong cultural connection to the sea means we’re ideally placed to create a world-leading and holistic approach to managing our seas for blue carbon,’ says Rowan. ‘The evidence from this first year could be used to develop a cutting-edge Blue Carbon Management Plan.’

Look out for more updates and news from the team in coming months.