The importance of the Peregrine falcon to the Isle of Man

The Peregrine falcon is one of the Isle of Man's most popular native creatures. Bill Henderson MLC writes about the magnificent bird of prey and the importance of one of its habitats, the Marine Drive in Douglas.

The Peregrine falcon is one of the Isle of Man's most popular native creatures. Bill Henderson MLC writes about the magnificent bird of prey and the importance of one of its habitats, the Marine Drive in Douglas:

Peregrine falcons are indigenous birds of prey on the Isle of Man and there's an established and important breeding population.

Peregrine falcons are a magnificent bird – like a mini Eagle. They are the fastest creatures on the planet, being able to dive or stoop after prey almost out of the clouds at somewhere in the region of 200mph chasing down their quarry of other birds.

Peregrines have a dark grey back, almost the same colour as Manx slate, a creamy/white barred chest and long, bright, yellow legs and feet. Their toes are exceptionally long – which are for grabbing their prey in mid-flight. They also have a distinctive dark ‘moustache line’ each side of their yellow beak. The hooked beak is grey at the tip.

Peregrines are noisy at times and their ‘screams’ can be heard at great distances when they are calling to each other. Nest sites can also be very noisy affairs, as can perching points when the adult birds take their young out on their first hunting flights, such as we see here in Douglas, the Island's capital. One family in particular, has chosen the church spires of St Mary’s and Rosemount as their favourite vantage points.

Since 2017, this family or, more accurately, the mother, ‘Orange 27’, which is on her leg ring, has reared four families that I am aware of on the Marine Drive.

Her favourite nest site is an inaccessible cliff face near the Toll Gates of the Marine Drive, known to hundreds of people because of the ease which we can all watch her and dad bring up their family, and take photos. 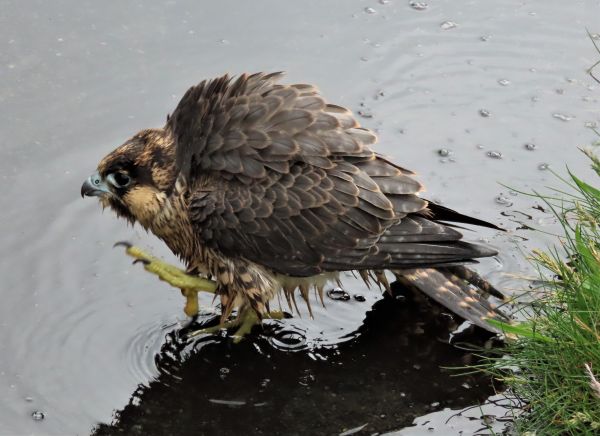 A young Peregrine in a puddle on Marine Drive

The huge drop and cliff face between road and nest, however, keeps this family reasonably safe from human interference. I call it a nest, but it is a rocky, stony, bleak ledge – somewhere sheltered to hatch eggs on, and no mossy bedding or feathers involved.

Mum and dad take turns hunkering down on the eggs on the stony floor of the ledge.

These birds are tough and hardy and can withstand, without obvious problems, all that the Manx weather throws at them when incubating their eggs and bringing up their youngsters.

It is a most amazing spectacle to follow as you normally only get chances to observe these wonderful birds when watching a David Attenborough programme, yet we have it all on our own doorstep.

I don’t say this with any exaggeration as, in 2018, when I was watching ‘our family’ grow up and the adult birds feeding their chicks, it was bringing the Marine Drive to a standstill, dozens of photographers being present at any one time. It stopped walkers, car drivers and others.

But, most amazingly, our TT visitors gave up race and practice ‘watch time’ to visit the Manx Peregrines, as they just did not have this kind of unique opportunity from where they came from.

I was even involved in sending email updates to visitors after their departure. They wanted to know how the family were doing. They were truly amazed at the ‘the Marine Drive Peregrines’, which have become unusual to see across much of the UK, dwindling in numbers due to loss of habitat and persecution. Our Peregrines are rare and protected. We are super lucky to have this family here.

The Marine Drive is a special and unique environment and habitat region – coastal to the east of the road and farmland/heather moorland to the west of it.

This combination of habitat structures offers a diverse home to other birds species, some rare and protected such as Choughs, Fulmars, Ravens, Kestrels and Stonechats, to name but a few. Also many plant, insect, mammal and reptile species are present. It is a wildlife haven.

Importantly, though, it is a ‘Marine Drive’ with its inherent clifftop road and footpath.

These make it accessible to the public and provide a wonderful place to enjoy recreation, wildlife and scenery.

From a UNESCO Biosphere point of view, it's important we have habitat ranges such as that on the Marine Drive.

The Peregrine falcons that live and breed there add to the general biodiversity - how much 'natural stuff’ we have in one place.

This is the fundamental building block for any UNESCO Biosphere and the principle for this kind of designation, management and determination of future management policies.

Critically, if we continue to conserve the wildlife and habitats we have now, and encourage biodiversity through further conservation measures, our environment will better aid climate change mitigation, or reversal of that climate change.

This can easily be achieved through habitat conservation improvements, general conservation and protection plans and programmes in conjunction with our community to make places such as the Marine Drive an area of highly significant social, environmental and natural biodiversity importance.