Brent geese and their fascinating relationship with the Isle of Man

This World Migratory Bird Day (October 10th), we take a closer look at Brent Geese and their fascinating relationship with the Isle of Man, in particular Langness and Derbyhaven.

This World Migratory Bird Day (10th October) we take a closer look at Brent geese and their fascinating relationship with the Isle of Man, in particular Langness and Derbyhaven.

This pretty bird can be identified by its black, white and grey plumage. Not much bigger than a Mallard, it is similar in flight to a duck, with quicker wing beats and better agility in the air than larger geese. 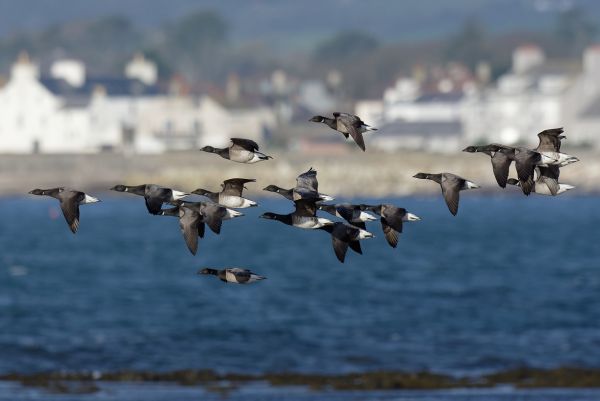 Migrating south with their young after breeding in harsh polar nesting grounds, they spend their lives on or near the coast; favouring wide intertidal areas with plenty of soft seaweed, roosting at sea, with a preference for sheltered waters close to the shore.

Winter food is eelgrass, green algae and other plants in the intertidal zone. They avoid rocky terrain, so most coastal areas on the Isle of Man are of no interest and the geese are often sighted simply flying overhead, travelling to their next destination.

Langness and Derbyhaven are increasingly desirable areas for overwintering Brent geese (among other birds), with recorded populations going back to at least 1929, though numbers were low and sporadic until 1993. They have been on the increase ever since 2006 and are now noted annually.

The geese visit the Island from September to May and recent years have seen high numbers with figures into the 80s in spring. These sightings are almost always at Langness and Derbyhaven.

The geese should be watched through binoculars from a distance as these long-distance visitors have to fit their feeding times around the tides and disruption of this routine can lead to a loss in body condition.