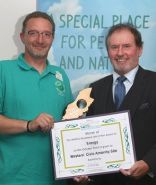 A community recycling initiative led by the UNESCO Biosphere award winner the Western Civic Amenity Site has gathered in 10 tonnes of material in its first year.

Last May, the site contacted schools in the west of the Island to gauge interest in a recycling collection scheme.

The Department of Infrastructure already collects waste paper from schools.

In March of this year, Isle of Man Creameries milk cartons were added to the weekly collections.

The scheme was extended to collect recyclable items from the Corrin Home, Western Swimming Pool, House of Manannan, DEFA and the recycling bins at Marown Commissioners. The Island’s prison at Jurby now delivers its recycling, too.

By the end of the school academic year in July, the collection scheme had gathered in more than 10 tonnes of recyclable waste, half of it from schools.

Mike Rose, Manager of the Western Civic Amenity Site, said: ‘This has saved organisations more than £1,000 in domestic waste charges and, better still, has increased recycling efforts in the west of the Island. We aim to beat the totals in 2019/20.’