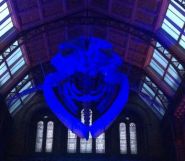 MNH talk series: 'Hope' for the Future: putting a whale at the heart of the Natural History Museum

On the 8th September Richard Sabin of the Natural History Museum, London delivered a talk on 'Hope', the blue whale skeleton that has taken centre stage in the Hintze Hall at the Museum.

Blue whales were hunted to the brink of extinction in the twentieth century, but were also one of the first species that humans decided to save on a global scale. The Museum has named the female blue whale Hope as a symbol of humanity's power to shape a sustainable future.

From how the whale was first discovered in Wexford, Ireland, in the early 20th Century, its place as an exhibit for many decades in the NHM's mammal hall and then the exciting transformation into the dynamic exhibit you can go and see today, the talk was well received and covered many aspects of the blue whale and the journey into making it the iconic centre piece of one of the world's most successful museums.

Richard's talk was followed by 'How to Move a Giant: the Sei Whale at the Manx Museum' by Laura McCoy, Natural History Curator for Manx National Heritage.

This highlighted the similar journey that the Manx Museum's own Sei Whale went through and the rich archive material we have to support our wonderful natural history collections.

The last two talks were by Lara Howe from Manx Wildlife Trust on cetacean strandings on the Isle of Man and by Bryony Manley from Manx Whale and Dolphin Watch covering the monitoring of living whales and dolphins.

All of these presentations highlighted the importance of the work these organisations do, their not just local but global impact and why working together makes us much more effective.

The better we understand our rich marine life and why the Isle of Man is so important for many animals in our seas the more we can do to help support them.

The event was kindly supported by Department of Environment, Food and Agriculture.